Russia Post released a Souvenir Sheet to celebrate 350th Birth Anniversary of Peter I (1672-1725) depicting painting of Peter I by V. Serov. Peter Romanov (1672-1725) was an outstanding statesman, the first Emperor of Russia (since 1721). 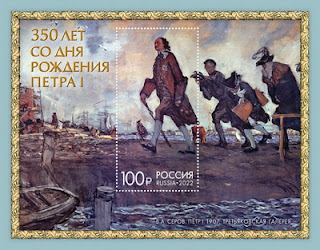 Emperor Peter I is considered a talented military leader, a great reformer, diplomat and lawmaker, who defined the main development guidelines for Russia in the 18th century. The reforms implemented by Peter I resulted in the growth of the mighty power of the Russian state and enhancement of its economic potential and military superiority throughout the world.
Posted by Mansoor Bolar at 10:30 AM