Port of Hamburg named Germany's "Gateway to the World" is the largest port in Germany and the third-largest port of Europe (after the port of Rotterdam and the port of Antwerp) It is situated on River Elbe. 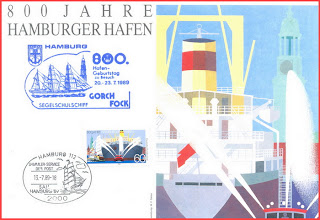 The card released for the 800th birthday of the port and which was celebrated from 20th to 23rd july 1989. The Gorch Fock is a sail training ship of the German Navy.
Posted by Mansoor Bolar at 11:21 AM 0 comments 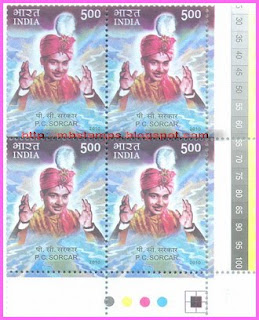 Protul Chandra Sorcar, the famous Indian magician, who was known for his stage shows by the name "Indrajal" was well known magician all over the world. India post has issued a stamp in his honour for his achievements on 23rd Feb.2010.
Posted by Mansoor Bolar at 11:02 AM 0 comments

The Bible Society of India. 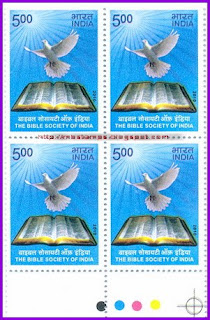 A stamp was released on 21st Feb 2010 on Bible Society of India on its 200 years of serving the Indian Churches and society of all the ethno-linguistic communities.
Posted by Mansoor Bolar at 3:46 PM 0 comments 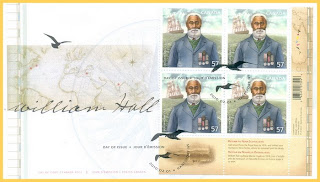 William Hall, V.C., was born in Circa 1825 in Nova Scotia, to African-American parents who had been liberated from the U.S Slave Trade. He launched his seafaring career at a young age, first joining the crew of an American trading vessel as a merchant mariner in 1844. In 1852 Hall joined the British Royal Navy, the world's leading Naval power at the time. While serving on the HMS Shannon in 1857, he volunteered with a relief force sent to Lucknow, India, where a British garrison was besieged by mutineers. two survived the attack, Seaman Hall and Lieutenant Thomas young, but only Hall was left standing, and he continued to fight until the relief of the garrison was assured. for this, Hall was awarded the coveted Victoria Cross, the British Empire's highest award for valour. he was the first black person, the first Nova Scotian, and the first Canadian sailor to receive this outstanding honour.
Posted by Mansoor Bolar at 5:29 PM 1 comments 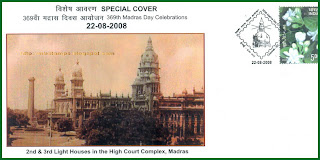 This special cover released on 22nd August 2008 to celebrate 369th Madras Day has the cachet of the 2nd and 3rd Lighthouses in the High Court Complex, Chennai and the cancellation of the 3rd Light House which functioned from the main dome of the newly constructed Madras High Court Building in 1894.
Posted by Mansoor Bolar at 4:14 PM 0 comments

Special cover released for the silver jubilee celebration of Shree Vasavi Education society (R) Chitradurga ( Karnataka) on 5th Feb. 2010, in memory of its dedicated service in the field of Education.

A few days back I received 3 beautiful stamps from Israel on Lighthouse released on 26th November 2009.All the stamps have tabs on it which marks the celebration of Philatelic day. 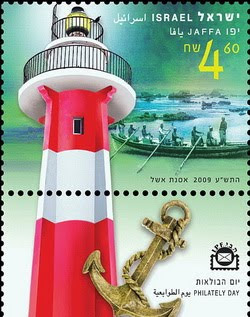 This 29-meter high lighthouse is built on a hilltop poised above the Jaffa Port. The Jaffa lighthouse was initially erected in 1865 as part of operations carried out by Turkish authorities to improve the port facilities. The structure appearing on the stamp was built by the British in 1936. The lighthouse’s identifying mark was four white flashes, emitted every 14 seconds. The rocks along the Jaffa shore did not allow ships to enter the Port, thus passengers and cargo were offloaded at sea and transported to shore in small row boats, such as that appearing on the stamp to the right of the lighthouse. 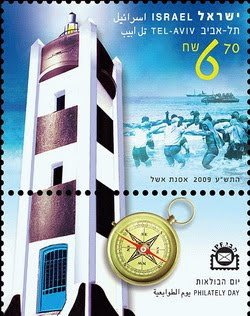 This lighthouse was built in the 1930’s on the beach to the north of Tel-Aviv, adjacent to the Yarkon Estuary in order to warn ships against approaching the shore, where sandbars were located. The 20-meter high lighthouse served the Tel-Aviv Port as well as the adjacent electricity plant harbor.The lighthouse’s identifying mark was two flashes (one long and one short), emitted every seven seconds.

On 15 May, 1936 approval was received to operate a Hebrew port in Tel-Aviv. Four days later the first cargo ship to arrive at the makeshift port was unloaded. Sacks of cement were offloaded at sea and transported to shore in small boats. The porters, excited to be taking part in this historic event, expressed their joy by dancing a rousing Hora. 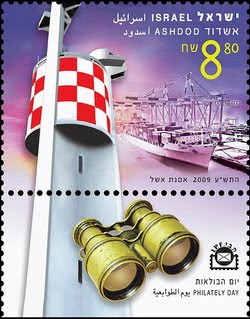 This 76-meter high lighthouse is built atop Tel Yona, near the Ashdod Port. It was erected in the 1960’s as part of the construction of the port facilities. The lighthouse’s identifying mark was three white flashes, emitted every 20 seconds.Ashdod Port is Israel’s largest sea Port. It is a modern facility, equipped with huge cranes and is capable of handling large cargo ships quickly and efficiently. 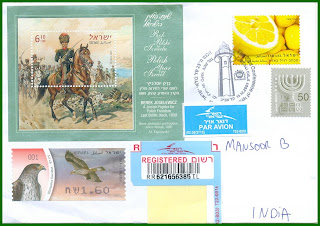 I thank Paulo for the stamps and beautiful cover also with a cancellation of Lighthouse - dated 15/12/2009 Tel Aviv - Yafo - The 23rd Conference of Israeli Philatelists lighthouse in Jaffa.
Posted by Mansoor Bolar at 11:38 AM 1 comments

First cover is on released on 11th January 2010 marking the occasion of the the 14th IndianRailways Jamborette from 11th to 16th January at golden rock, Tiruchirappalli organised bySouthern Railway State Bharat Scouts and Guides. The cancellation shows the sketch of the Rock Fort, the historical landmark of Tiruchirappalli. 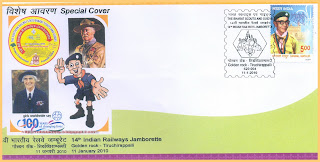 The second cover was released on 27th January 2010 on the occasion of All stal Kabaddi Tournament Tamilnadu Circle, with the cancellation of the Kabaddi match. The cover was sponsored by Lakshmi Matriculation Higher Secondary School, Trichy.

I thank Mr.Veeraraghavan for his kind contribution.
Posted by Mansoor Bolar at 11:21 AM 1 comments

The second Issue of "GLOBAL EXPRESS" is being published, which is a real effort by a young philatelist Mitul Kansal, to bring together news relating to Philately and Numismatics and present it to the readers through his e-bulletin. I request all stamp and coin collectors to subscribe to this FREE bulletin to promote and further encourage him.
Click to subscribe / visit - http://emmkayglobalexpress.wordpress.com/
Posted by Mansoor Bolar at 4:34 PM 1 comments