A special cover was released on 4th February 2016 to celebrate the platinum jubilee of C.S.I Corley Higher Secondary School at Tambaram.

C.S.I. Corely Higher Secondary School was started as Primary School by the Methodist Missionaries then it was upgraded  as a middle school in the 1941.  The school was named after a Methodist Missionary Prof. Ferrend Edward Corley who worked in Madras Christian College as a professor of history.  In the academic year 1978 - 1979 the school was upgraded as a Higher Secondary School.  By imparting holistic education, training and moulding, we help our students to be intellectually sound, morally upright, socially sensitive and spiritually perfect.

Ministry of the Russia for Affairs for Civil Defense

Russian Post issued a stamp on Ministry of the Russian Federation for Affairs for Civil Defense, Emergencies and Elimination of Consequences of Natural Disasters on 27th November 2015.

The stamp depicts the building and the emblem of the Russian Emergencies Ministry.

A Special Cover and a set of 3 Picture Postcards on Martyr’s Day was released on 30th January 2016 at Lucknow. 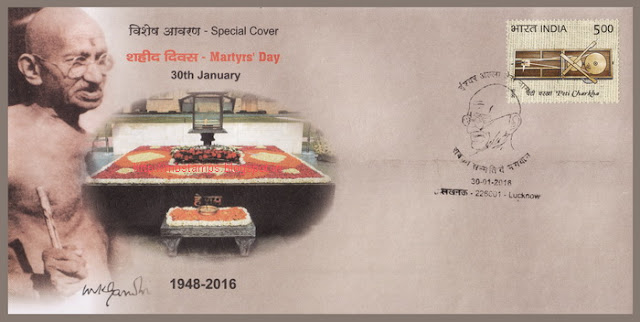 Russian Post issued a stamp on the 200th Anniversary of the Zlatoust Arms Factory on 17th November 2016. The stamp depicts an anniversary dagger and a factory building on the background. 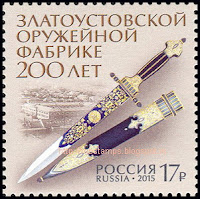 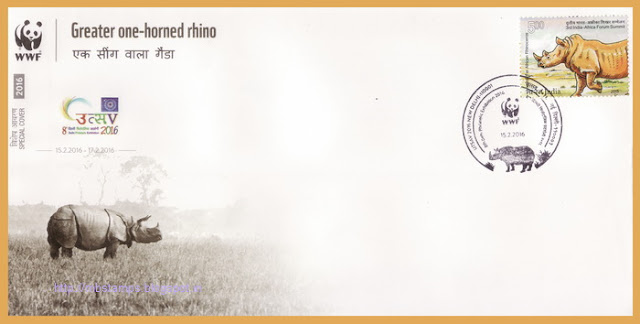 The Greater One-horned Rhinoceros was once found across the floodplains in the Northern part of the Indian subcontinent.   Their population was severely depleted due to poaching  and habita tdegradation and all these put the species on the brink of extinction in the early 20th Century.  In the 70’s there were only 600 individuals in the world.  Currently Greater One-horned Rhinos are found in India and Nepal and their population is around 2500. 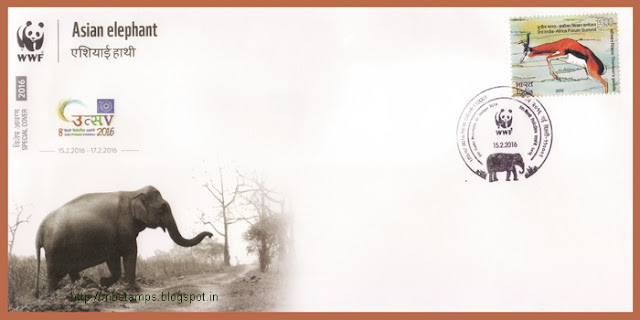 Elephants have been revered for centuries in Asia where they play an important role in culture, religion and ecosystems. Currently their population are threatened with poaching, and their habitats and corridors are shrinking.  Asian elephants are now listed as endangered on the IUCN Redlist of Threatened Species. 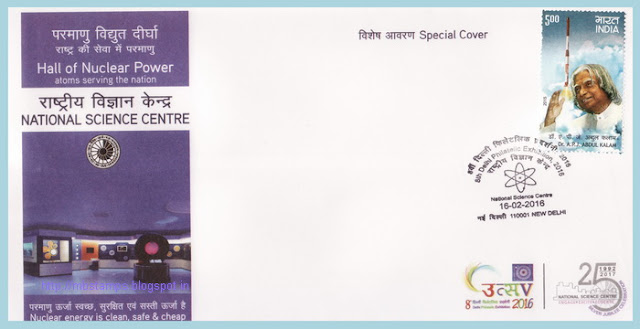 National Sceince Centre – Nuclear technology is many things.  It is electricity.  It is medicine.  It is research  tool.  It is friend of the farmer.  It is disrructive, and much more.  One can see its many faces in the Hall of Nuclear Power at National Science Centre, Delhi. 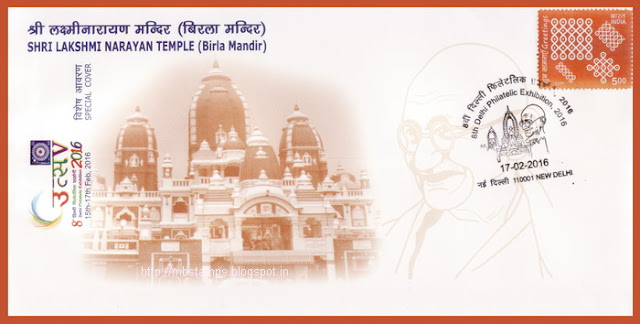 Shri Lakshmi Narayan Temple also called as Birla Mandir is one of Delhi's major temples and a major tourist attraction– The father of nation Mahatama Gandhi on the request of Shri Jugal Kishore Birla inaugurated the temple on 18th March 1939, on the condition that people of all castes will be allowed to enter the temple.

Maharaja Agrasen Ki Baoli – The Step well (Baoli) on Hailey Road (NewConnaught Place) was built by Maharaj Agrasen during the Mahabharatha epic era and it was rebuilt in the 12th Century by Agarwal Community during regime of Anangpal III.  This 60- Meter ling and 15 Meter wide and four storey remarkable National Monument  with more than hundred steps is the centre of attraction for tourist.

It's my pleasure to inform that the first prize of the 2016 Stamp Design Competition has been bagged by a participant from Mangalore. Out of more than 5000 entries received from all over India 3 entries have been selected for the prize of the "Vibrant India" design of stamp released on the occasion of Republic Day, 2016.

Russia Post released a set of 4 stamp on the 17th of November 2015 depicting Stadiums for the 2018 FIFA World Cup to be held in Russia. 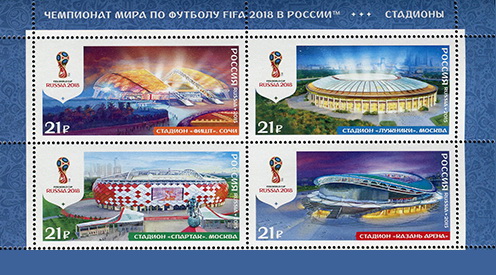 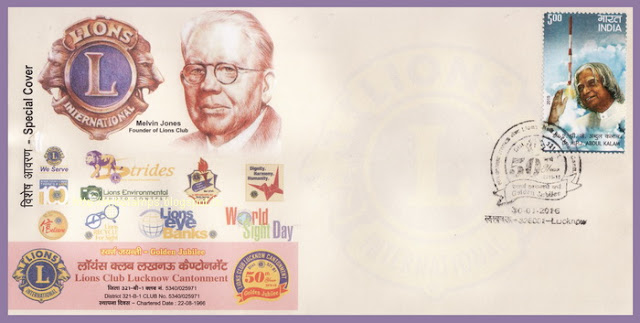 On the occasion of 90 Glorious years of Service a special Cover on Seth G S Medical College and K E M Hospital released on 22nd January 2016 at Mumbai.

India Post has brought out the 2014 year pack consisting of 36 stamps and souvenir sheet released in the year 2014 in an attractive pack. The cost of the Pack is Rs.500/- and will be available at all the Bureaus and Counters in India. 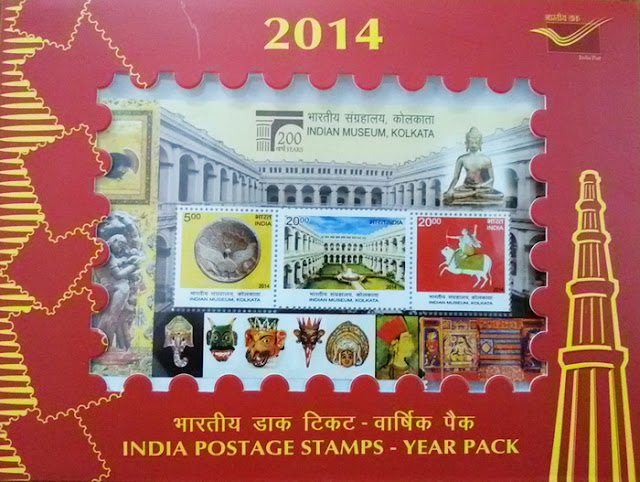 A special stamp was issued by Russia Post jointly with Lao People's Democratic Republic to celebrate 55th Anniversary of Establishment of Diplomatic Relations on 11th November 2016. 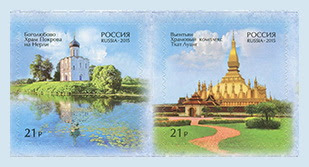 The Cathedral of the Intercession of the Holy Virgin on the Nerl River is one of the masterpieces of world architecture built in 1165 by St Andrei Bogolyubsky. It is a low fretted church having four internal piers and one dome. In 1992, the cathedral was listed as a UNESCO World Heritage Site as a part of the White Monuments of Vladimir and Suzdal. This year the Cathedral got the 850th anniversary of  foundation.

That Luang is a Buddhist religious building, an outstanding monument and a national symbol of Laos. It is situated near the country capital of Vientiane. The construction of That Luang officially began in 1566 when King Setthathirat ordered construction of the Spire of Universe.

A special cover was released on 'Asha Kiran - A ray of hope' project on 7th January 2016 at Mumbai. It is the Child Development Program of Rotary India Literacy Mission (RILM) to send all out-of-school children in the age group of 6 to 14 years. 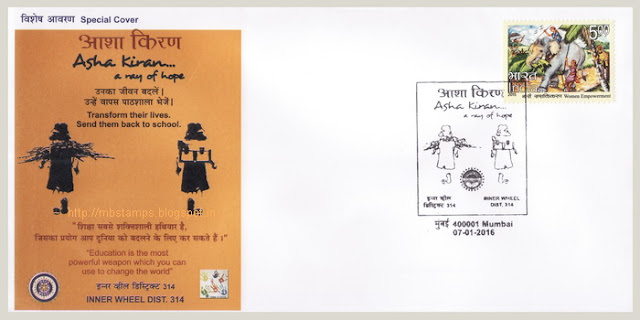 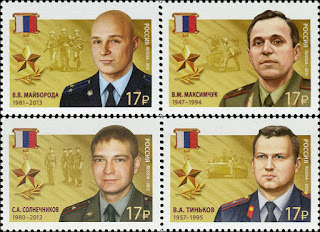 A special cover was released at Imphal on 22nd November 2015 to celebrate Manipur Sangai Festival. 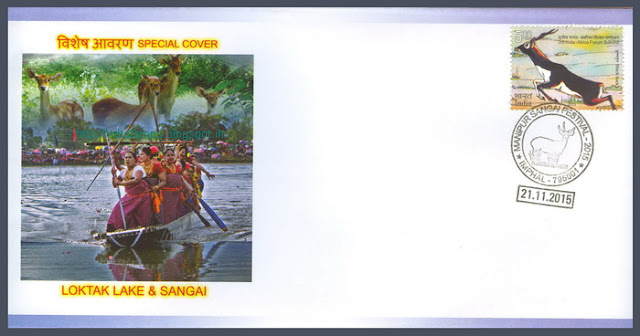 Russia Post released a stamp to celebrate 100th Birth Anniversary of Ashot Badalov on 10th November 2015 Who devoted his life to radio communications and broadcasting.

The stamp depicts a portrait of Ashot L. Badalov with a Central Telegraph building in the background.

Russia Post released a souvenir sheet on the coat of Arms of Kostroma Region on 5th November 2015. 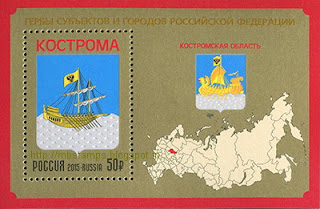 A special cover was released on 15th January 2016 for the centennial (1915-2015) of the Karimabad Bharat Scout Group at Mumbai. 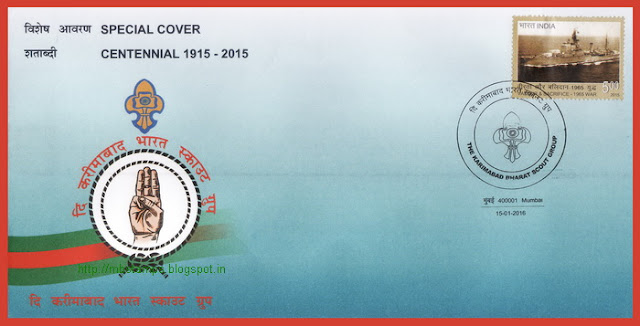 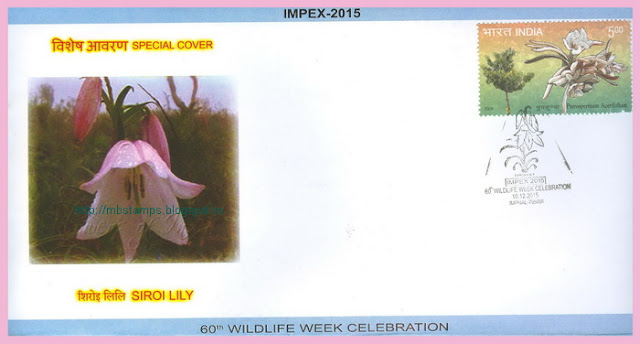 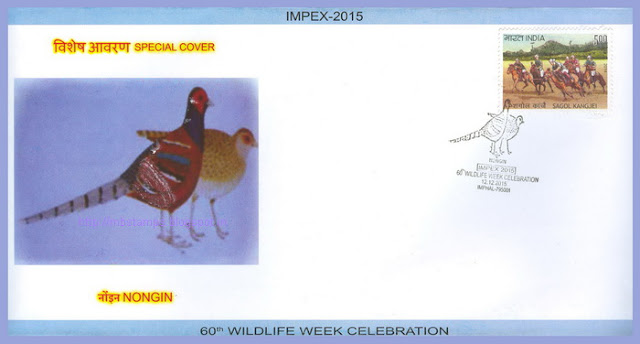 A special cover of Dinanath Dalal, Goan artist and painter was released in Goa on the occasion of the centenary celebrations on 15th January 2015.

North Karnataka Postal circle has released thier 14th set of Picture Postcards “Mammals of India”. The set contains 48 cards and comes in an attractive box and is priced at Rs.150/-.  It is a really beautiful set of postcard which is worth collecting or to be used by Postcrossers and philatelists. 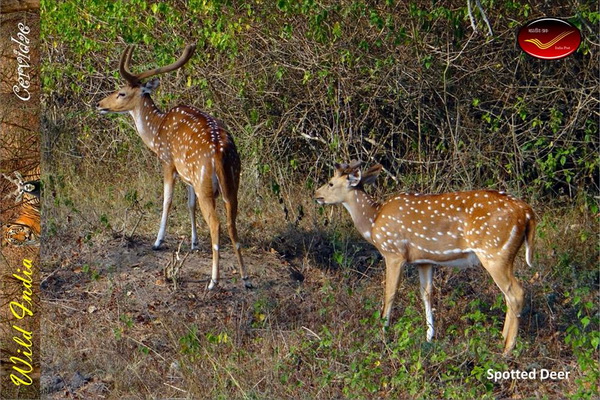 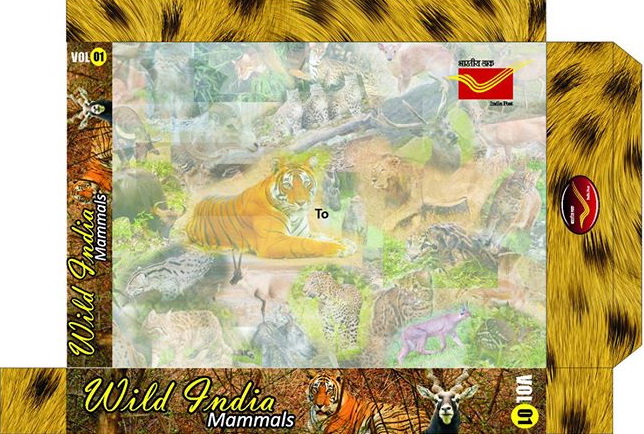 A special cover was released on 9th January 2016 on the occasion of 6th Annual conference of  GAPIO ( Global Association of  Physicians of Indian Origin) at Bengaluru. 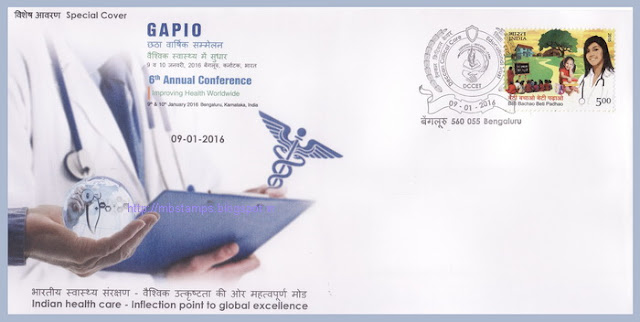 A commemorative stamp was released in Vishakapatanam on the occasion of International Fleet review on 6th February 2016. 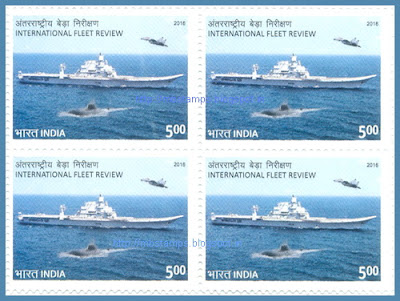 Nashik Dhol : Nashik Dhol is a special form of rhythmic music played with the big drums or locally known as dhols. It is a musical instrument belonging to the Membranophone Category. It is popular all over Maharashtra for creating a rhythmic and exhilarating atmosphere and has become the cultural identity of Maharashtra's celebrations. All the public celebrations including weddings, Navratri, Ganpati Visarjan, rallies, college gatherings tend to be incomplete without Nashik Dhol. 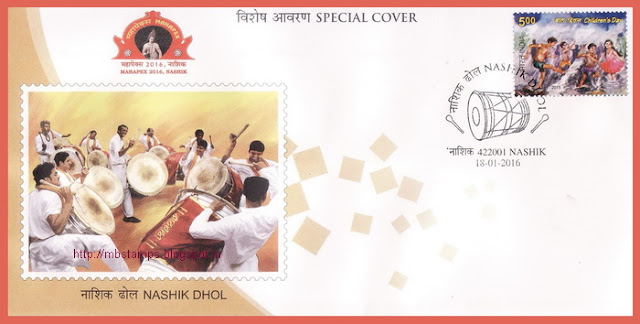 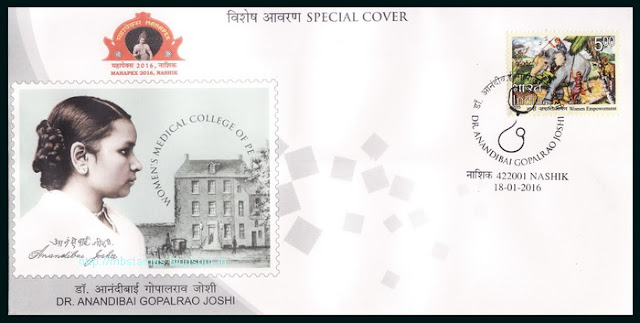 Kalaram Mandir : The Kalaram Temple is an old Hindu shrine dedicated to Rama in the Panchavati area of Nashik city. The temple derives its name from the statue of Lord Rama that is black. The literal translation of kalaram means black Rama. The sanctum sanctorum also houses the statues of goddess Sita and God Lakshmana.

City of Grapes – Nashik : Nashik is in northern Maharashtra at 700 mtrs from the  sea level. The river Godavari originates 24 km from Brahmagiri Mountain, Tryambakeshwar, Nashik and flows along the northern boundary of the city through the old residential settlement. The soil of Nashik is primarily black which is favorable for agriculture. Nashik is famous for grapes, onions, and tomatoes. Nashik is famous for its table grapes and known as the Wine Capital of India. 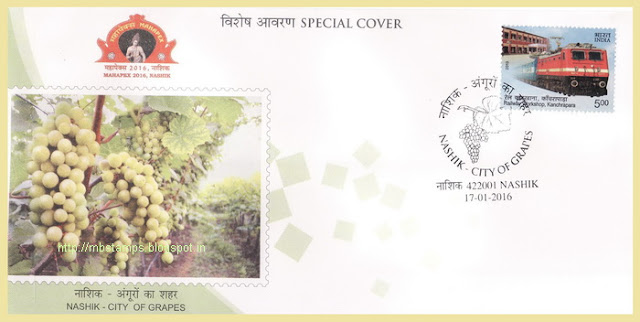 Pandav Leni : Pandu Leni also known as Trirashmi Caves are a group of 24 caves carved between the 3rd century BC and the 2nd century AD, representing the Hinayana Buddhist caves. The location of the caves is a holy Buddhist site and is located about 8 km south of Nashik. 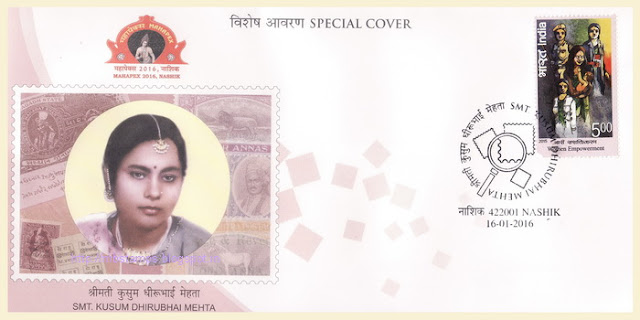 A special cover was released on 30th November 2015 at Jaipur on Sahitya Vachaspati Mahopadhyay Vinaysagar on his first death anniversary.

India Post released a Special cover to celebrate the  Silver Jubilee of Salim Ali Centre for Ornithology and Natural History on 28th January 2016 at Coimbatore. 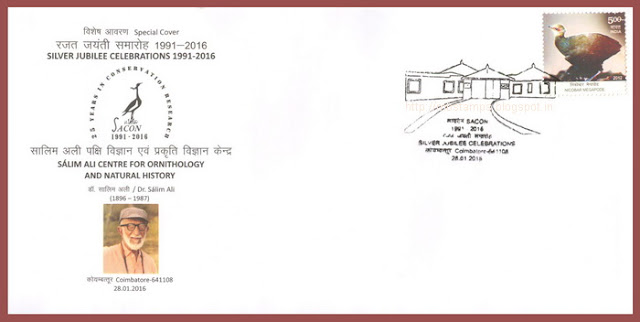 India Post released a miniature sheet of "Vibrant India" on 25th January 2016.The Department of Posts had organized national level stamp design competition on the theme of ‘Vibrant India’ for the stamp to be released on the occasion of Republic Day 2016. 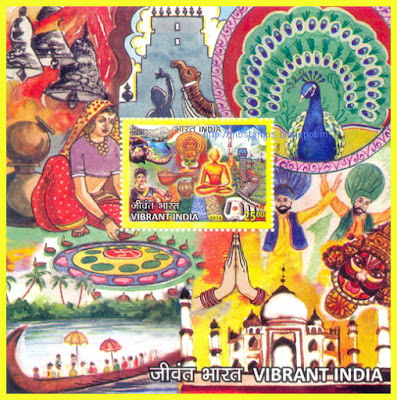 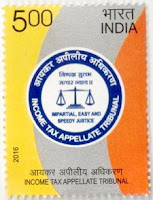 Our Lady of Health Church

A special cover was released on 20th December 2015 at Pondicherry on our lady of Health Church, Ariankuppam for its 365th  jubilee celebrations.