On February 26, 1999, the U.S. Postal Service and Ireland Post released a joint stamp on Irish Immigration. The U.S stamp was released in Boston, with a special ceremony in Chicago.The irish stamp was released in Cobh, a port city approximately 120 miles south of Dublin from where the majority of the emigration ships departed for America. 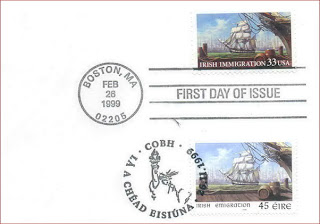 In the 114 years between 1815 and 1929, nearly six million immigrants sailed across the ocean in huge vessels searching for new opportunities in North America. The five-year period between 1845 and 1850 marked the height of the migration out of Ireland. During the Great Famine more than a million Irish died of starvation and disease when a fungus destroyed the Irish potato crop, which the population depended on as the main ingredient in their diet.
The stamp depicts a large ship sailing into a harbor as seen from a dock. The words "IRISH IMMIGRATION 33 USA" in the U.S stamp and the words "IRISH EMIGRATION 45 EIRE" are featured in the Irish Stamp.
Thanks, Sandra for the beautiful cover which is a valuable addition to my collection.
Posted by Mansoor Bolar at 4:18 PM 1 comments

I received this classic Art Post card of Govt. Locks in Seattle, Washington from a friend in U.S.A 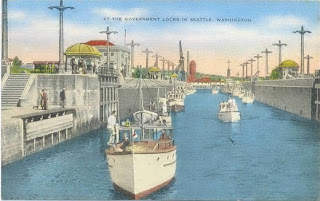 This Lock is second only to the Panama Canal Locks, in size of the vessels served. Ships are lifted from the level of Puget Sound to the level of Lake Union and Lake Washington or lowered when outward bound.
Posted by Mansoor Bolar at 2:44 PM 0 comments 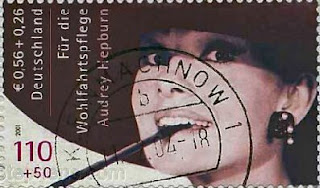 A rare special stamp featuring late British Actress is to be auctioned today, which is worth to be more than USD 40,000.

In 2001, the government printed 14 million Audrey Hepburn stamps as part of a series featuring movie stars including Charlie Chaplin, Marilyn Monroe and Greta Garbo. The print run was destroyed after Hepburn's son, Sean Ferrer, objected to the cigarette holder dangling from the actress' mouth and refused to grant copyright.

It is beleived that about thirty of these proof copies escaped destruction and has been used for sending letters from Berlin, but only 4 has been identified till date and this is the fifth to surface, as it is thought that the rest may be destroyed along with the covers.
Posted by Mansoor Bolar at 11:45 AM 1 comments

STAMPMANIA 2009 is getting overwhelming response and there are plans for several activities during the event to make it a memorable one.

Dealers, if you are planning to make it to the event, HURRY UP! as only 4 booths are available at First Floor. The Organisers have come up with the idea of putting web banners of dealers in ‘PARTICIPATING DEALERS’ link who have booked their dealers’ booth at ‘Stampmania 2009. For the first time in any philatelic exhibition, organisers have offered opportunity to place such web banners on exhibition’s website and are receiving good response from dealer friends.Web banners will be placed on the website in 600 x 100 pixel size. (Please note that banners of other sizes will not be accepted)
visit www.stampmania2009.com for more information or contact:
Mr. Prashant H. Pandya
Phone Nos.: (R) 0265-2371179, (O) 0265-2425131
Mobile: 9879571179,
email: info@vadophil.org
Posted by Mansoor Bolar at 11:54 AM 0 comments 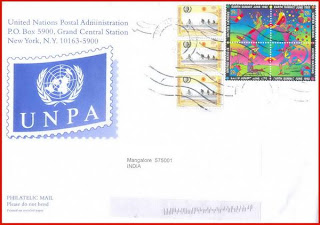 Here is a cover I received from United Nations Postal Administration, which has beautiful stamps from UN. To the right, is a set of four Se-tenant stamps on Earth Summit and three stamps on Youth.

I had planned to write a short write-up on World Heritage Sites - Germany, but I found the same in detail in another blog of a friend and hence I am giving a link to Rainbow Stamp Club in which you can find the same.
Posted by Mansoor Bolar at 10:28 AM 0 comments 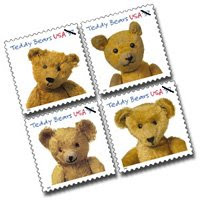 Kids just love Teddy Bears and if you are a stamp collector you may love this slide show on Youtube. Yes there are other clips on Youtube related to stamps, so if you are feeling bored at home this summer vacation you can watch this video and do something interesting with your stamps, if you are just starting on with stamp collecting you may get some interesting topics to decide.
Click here for the Video. - TEDDY STAMPS
Posted by Mansoor Bolar at 11:27 AM 0 comments

Today I present a cover received from Sandra,USA which has set of 5 stamps on Steamboats released in 1996 of 32 cents each. The top two stamps has been cancelled by wavy lines and place of cancellation, but the three stamps below has escaped cancellation. 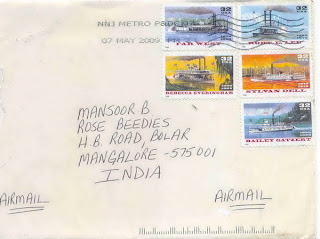 In June, Aland Post starts a new series of stamps on the theme passenger ferries, which operate or has operated to and from Aland since the start of passenger ferry service in 1959. The first two stamps depict the first ferry and the newest. 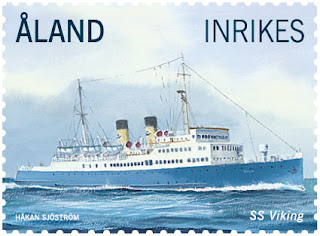 One of the ships featured is the s.s Viking; the other is a new one yet to be named and it is called as Newbuilding 2009 as seen in the stamps. 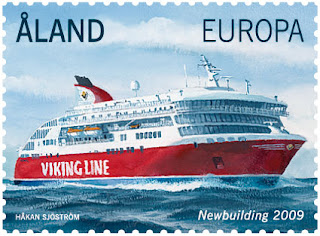 On 1 June 1959, the first proper passenger ferry, the s/s Viking, sailed off on its maiden voyage from Galtby in the Finnish archipelago of Turku, via Mariehamn to Gräddö in Roslagen.
The second stamp to be issued 1 June shows Viking Lines’ newbuilding, which will be operating between Kapellskär, Sweden, and Mariehamn, Aland. She is planned to be put in traffic at the end of 2009 or in the beginning of 2010. It will be the first newbuilding ever for short-route service across the Sea of Aland.

The passenger ferry series starts in 2009 and is planned to continue for quite a few years ahead. Shipping has always been of great importance to Alanders, not to say a bare necessity if you wish to travel to or from Aland.
Courtesy: Aland Post.
Posted by Mansoor Bolar at 3:09 PM 0 comments

It's my pleasure to inform all Philatelists that STAMPMANIA 2009 is receiving tremendous response from Dealers, Collectors, Philatelist and Well-wishers.

Dealers note that all booths at Ground flour is booked and only a few are available at first floor, which will be alloted a first come first serve basis.Hence I request all dealers who are interested to book the booths at the earliest.

For more information visit the website at www.stampmania2009.com
Posted by Mansoor Bolar at 11:40 AM 0 comments

Here I present two FDCs received from Australia on my subject. 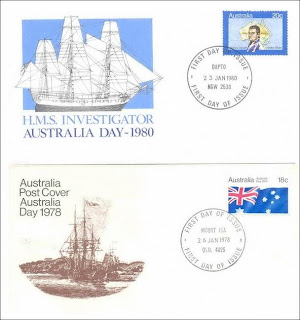 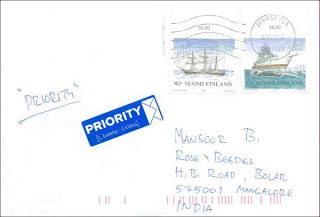 Here is a cover I received from Finland on my collecting interest. Thanks for the cover.
Posted by Mansoor Bolar at 3:22 PM 0 comments

(The above story is said to be a hoax (read comments) as I was unable to find any news of the same in the TNT website.

Any other comments welcome.
Posted by Mansoor Bolar at 12:12 PM 2 comments

No Entry for Saddam Hussein at Iraqi Stamp Show !

A stamp Exhibition was recently held at Baghdad Central Post Office, organised by the Ministry of Communications to commemorate the 87th year of Iraq joining the Universal Postal Union.

Famous figures from Hitler to the first king of Iraq and the Penny black were exhibited, but the government rejected the stamps that had portraits of Saddam Hussein, saying that they represent the blackest hours of Iraqi history.
Posted by Mansoor Bolar at 3:55 PM 0 comments