50th Anniversary of the First Woman in Space.

Russia Post released a stamp to commemorate 50th Anniversary of the First Woman in Space on 5th July 2013.

On June 16, 1963 spaceship “Vostok-6” was launched from the “Baikonur” space-vehicle launching site, carrying the world’s first woman-cosmonaut, Valentina Tereshkova  to space. In spite of the physical discomfort, Tereshkova endured 48 orbits around the Earth and spent almost 3 days in space. During the flight, she was keeping a logbook and was making photographs of the Earth’s horizon, which were later used for detection of aerosol layers in the atmosphere.
Posted by Mansoor Bolar at 4:27 PM 0 comments

Arts and Crafts of Russia. - Shawls 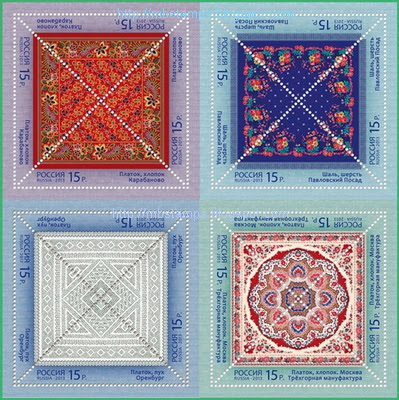 Scarves and shawls of Baranovs manufactured by Troitsko-Alexandrovsky can be traced back to 1846. The main space in the products is occupied by multicolored floral patterns. Red, being present in every element of the pattern, unites centerpiece, hem and background. Geometric and oriental (‘cucumber’) motifs are present on the scarves along with the floral patterns.

Pavlovo-Posad products represent lush bouquets of garden and wild flowers in the corners of a shawl and garlands on its hem, as well as oriental ornaments imitating the Indian and Persian shawls. Moscow Oblast’ is also famous for its patterned silk fabrics and scarves.

Orenburg shawl is a knitted shawl made of goat's fiber and base (cotton, silk or other).
There are several kinds of Orenburg shawls. The first is the grey (seldom white) thick down hair shawls. These shawls started the tradition of Orenburg down-hair knitting. The second is the quite dense kerchiefs and pautinkas. They are used for every day wear and they give similar warmth to shawls. The third kind of Orenburg shawls are very thin (compared with “spider web” pautinkas and tippets). As a rule thin pautinkas have fancy patterns and are used as decoration on special occasions.

Scarves and shawls always have played an important role in the diverse range manufactured by Tryokhgornaya .Most products of Trekhgorny factory had a ‘classical’ arrangement of the ornament: a broad hem with lush flower garland, and a large middle part with rhythmically balanced bouquets or branches, creating a feeling of some static pattern.

The XXII Olympic Winter Games in Sochi in 2014.

Russia Post released a set of 3 stamp on The XXII Olympic Winter Games in Sochi in 2014 on 29th June 2013. These stamps depicts winter sports like Bobsleigh, a downhill on special tracks with an artificial freezing of ice utilizing controlled sleighs, the Nordic combined comprises a ski jump and a ski race for 10 km and the Figure skating which is the oldest event in the Olympic Game.

The Karnataka Postal Circle has brought out a pack of pictorial cancellations of Karnataka in an attractive box, with 31 cancellation on postcards. 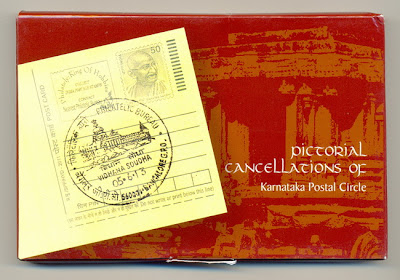 These sets are available in almost all Philatelic Bureaus and other important Post offices in Karnataka or Contact 080-22258832, 22874967

Fifteen-year-old Daniel Korcak, from Ostrava, Czech Republic, has won the Universal Postal Union’s 42nd International Letter-Writing Competition for Young People with his letter to the central European river, the Oder. 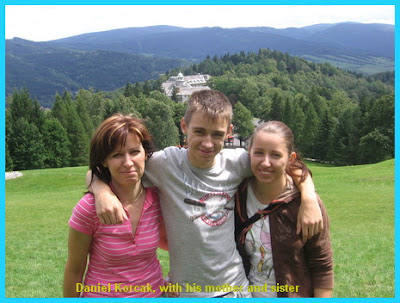 Recalling the current International Year of Water Cooperation, the 2013 contest asked budding writers to explain why water is a precious resource.

"I thought many students would write to a person, so I decided to write my letter directly to water,” says the gold-medal winner, whose simple, creative and innovative prose captivated the international jury.

"Daniel reminds us just how much we depend on water, too often taken for granted. His letter, tender and universal in its appeal, portrays the Oder as a symbol of water everywhere," declared the jury.

UPU Director General Bishar A. Hussein congratulated this year’s winners, saying: “Communication is at the heart of the postal activity and, in a sea of digital messages, it remains critical for young people to understand the importance of the written word and the structured composition and recognize the emotions and call to action good writing can elicit. Postal services support literacy and communication, and we are delighted that our competition touches so many young people.”

An estimated 1.5 million young people from 60 countries participated in this year’s contest.

Winners will receive their prizes on 9 October 2013, World Post Day.

India Post released a stamp of Raj Bahadur on 21st August 2013. He served as Minister of Telecommunications for the year 1956 - 57. He was also an Indian Ambassador to Nepal. 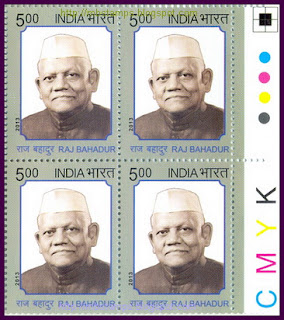 The Cayman Islands Postal Service released a set of stamps titled Anchors on 2nd August 2013. This stamp issue features the anchors of local shipwrecks, Anchors illustrates the type of ship and provides a brief background of the circumstances of the sinking and the location. The stamps highlight the anchors of the Mathusalem (20c), Topsy (25c), Inga (25c), Tofa ($1.50), Glamis ($2). Anchors are an important detail because they are useful in identifying the size of a ship, since there is a specific scale of size to weight ratio between ships and their anchors. They also assist in identifying the date when a ship was built. 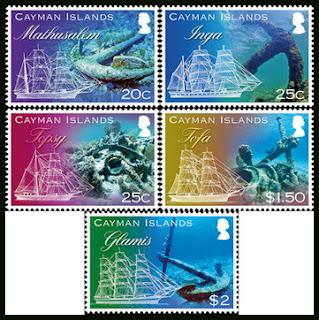 The Mathusalem was a wooden bark built in 1868 by Giuseppe Tonello at his private shipyard in Trieste, Italy. A merchant vessel (used to transport cargo and passengers), she was 140 ft long, weighed 537 tons and was lost in 1893, 25 years after being built, at East End, Grand Cayman. In fact, the Mathusalem’s wreckage is amongst a number of other ships’ remains including the Glamis, Maribelle, Otto Lee and possibly the Belle of the Clyde in the same area at East End. Her anchors and piles of chains lie on the reef crest, jettisoned in attempts to lighten the load of the stricken ship.

The Inga, originally called the Peter Denny, was a three-masted, full-rigged ship with accommodation for 300 to 400 passengers. She was built in Scotland by John Duthie and Sons in 1865 and had a reputation as a fast ship. The Peter Denny was 197 ft long and had a 34ft beam and a depth of 20 ft. She weighed 998 gross tons.  In 1883/1884 the Peter Denny was sold to L. Larsen of Sandefjord, Norway and was renamed Inga. On 17 September 1888, the Inga came to her demise off the south coast when she ran aground near Old Isaacs, East End and where her two anchors are located, one of which is completely submerged.

The Topsy, foundered near the Buccaneer harbor, northwest Cayman Brac on 15 February 1890. She was caught at the end of unloading her cargo and was unable to pull her massive anchor up in time to set sail around the western point of Cayman Brac to the safety of the south shore. The Topsy was a wooden bark, 89.2 ft long and weighed 139 tons. It was built by John Walsh and William Douglas on Prince Edward Island, Canada in 1853. The main anchor of the Topsy is in 40ft of water at the very popular dive site known as Buccaneer.  Her main anchor is used to tether the mooring buoy for the dive site, with the rest of the stricken ship’s remains scattered along the mini wall and in the shallows.  This is perhaps the most popular of the shallow diving and snorkeling sites found around the shores of Cayman Brac.

The Tofa was built in 1891 by A. Sewall & Co in the New England region of the United States. A wooden ship of teak and birch, she had a bridge deck (the upper deck where the captain stands and from whichthe ship is steered), with another deck below. Weighing in at 631 gross tons and measuring 172 ft in length, her beam was 35ft and with a draft of 13ft she was able to carry 378 tons of cargo below deck. The Tofa was driven ashore in bad weather in September 1915.  Along the south shore of Little Cayman Island and east of Owen Island, offshore at Rocky Point, lie the Tofa‘s anchors, ribs and stays.

The Glamis was one of 21 ships built by Alexander Stephen and Sons Limited of Dundee Shipbuilding Company in 1876. She was a three-masted iron and steel barque (so described of any vessel with a particular type of sail-plan). This comprises three (or more) masts, fore-and-aft sails on the aftermost mast and square sails on all other masts. The Glamis weighed 1,232 gross tons, was 225.3 ft long with a depth of 21.9 ft and a beam of 34.8 ft. She was fitted with two decks with cemented bulkheads. The Glamis struck the reef off Grand Cayman’s East End on 14th August 1913. Her anchor is just part of the massive amount of well-broken up remains of this steel ship which litters the shallow reef at the northeast end of Grand Cayman (Colliers Channel opposite the Reef Resort). 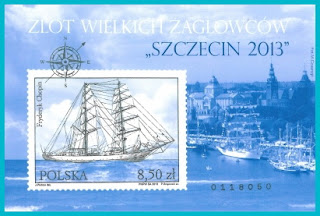 The Tall Ships Races are an annual tall ships regatta, which is organized by the Sail Training International. The ultimate goal that the regatta pursues is the “sail training” – education of young people and the development of essential life skills on tall ships. 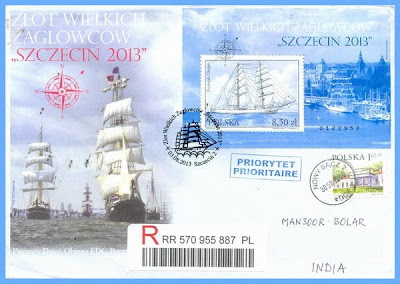 My thanks to Andrzej, Poland.

The stamp depicts a portrait of RG Gamzatov and badge of the Order of St. Andrew the First-Called. 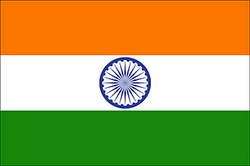 Wishing all my friends, viewers and fellow bloggers a very
HAPPY INDEPENDENCE DAY.
Posted by Mansoor Bolar at 12:00 AM 0 comments

Stamp of Aland Post features M/S Princess Anastasia. The ship operates on the route Stockholm-Tallinn-St Petersburg-Helsinki and the Russian stamp depicts a passenger ferry plying between St. Petersburg and the Åland Islands. 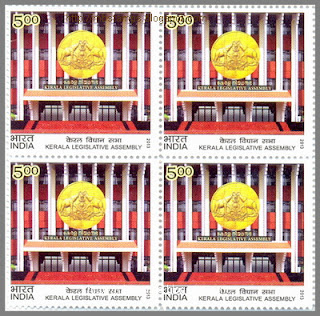 The Stamp depicts the new assembly building called the Niyamasabha Mandiram located in Thiruvananthapuram. The building has a large assembly Hall, gardens and water bodies. The complex also accommodates the residence of the Speaker, Dy. Speaker and the Secretary of the Niyamasabha. It also maintains museums for promoting legislative awareness among the public.

First Summer Student Games held in May 1923 in Paris. In 2013, the venue for the Summer Universiade will be Kazan .This event will bring together young athletes from around the world in a unique multinational heritage.Russia Post released a souvenir sheet to commemorate this event on 25th June 2013. 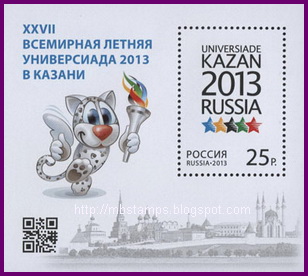 The mail box shows the logo, mascot - the snow leopard kitten Uni, view of the Kazan Kremlin and the QR-code of the XXVII World Summer Universiade 2013 in Kazan.