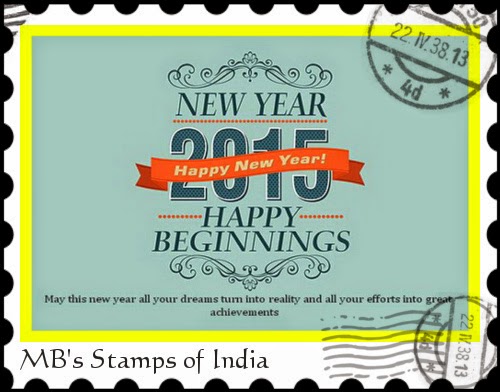 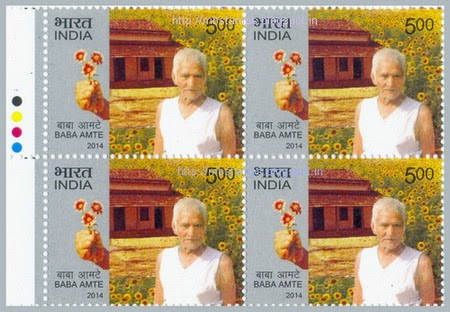 Baba Amte was born as Murlidhar Devidas Amte who was a social activist known particularly for his work for the rehabilitation and empowerment of poor people suffering from leprosy.He was a staunch follower of Mahatma Gandhi.
Baba Amte was awarded Padma Shri in 1971, Ramon Magsaysay Award in 1985, Padma Vibhushan in 1986 and Gandhi Peace Prize in 1999. He was also awarded the United Nations Prize in the Field of Human Rights in 1988 and many other awards for his social work.

India Post released a stamp on 150 years of Kuka Movement on 24th December 2014. 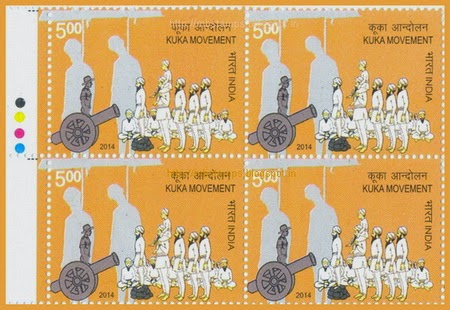 A special cover was released in Visakhapatnam to celebrate the Platinum jubilee of INS Circars on 12th December 2014. 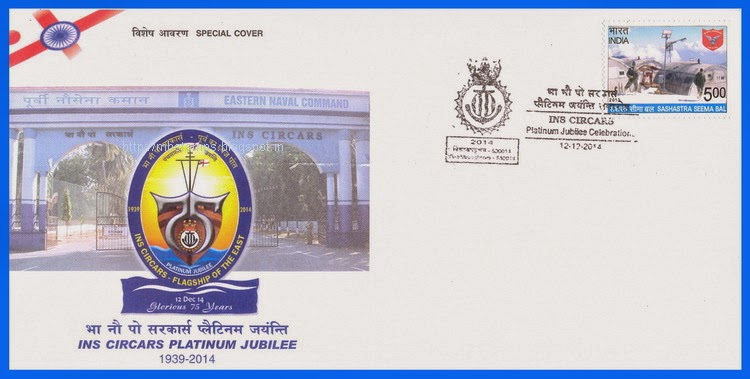 Department of Posts is holding a “Independence Day 2015 – Stamp Design Competition” and has invited the public to participate in this competition.. The theme of the competition is "Women Empowerment". The last date for submission of entry will be on 31st March 2015. For more information and entry forms kindly visit the website of India Post

Coat of Arms of Krasnodar Region. 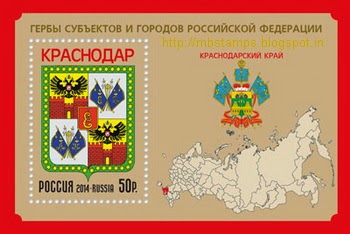 Russia Post released a Souvenir sheet of the Coat of arms of Krasnodar region on 18th September 2014. The stamp depicts the coat of arms, and in the margins the emblem of the Krasnodar Territory and the map of the Russian Federation with the area marked in red.
Posted by Mansoor Bolar at 9:30 AM 0 comments 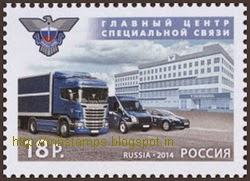 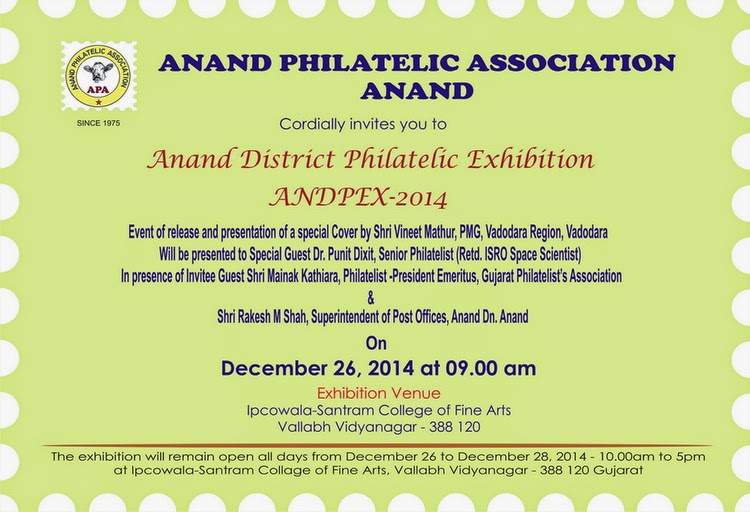 Sergius of Radonezh,  Russian church monk, founder of the Trinity Monastery near Moscow (now Trinity-Sergius Lavra), venerated saints in the church as a monk, and is considered the greatest devotee of the Russian land. 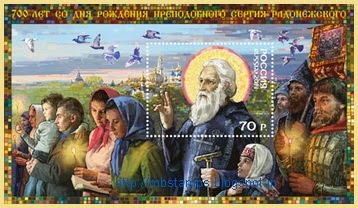 The souvenir sheet depicts a procession led by St. Sergius of Radonezh in the background of the Trinity-Sergius Lavra in the sky - flock of pigeons (followers and disciples of St. Sergius). Showing historical figures (from left to right) - Grand Duke Dmitry Donskoy, a legendary warrior monk Alexander Peresvet and modern Orthodox people who are in front of a lighted candle.

Church of the Ascension in Kolomenskoe

Russia post released a souvenir sheet depicting the Church of the Ascension in Kolomenskoe on 5th September 2014. 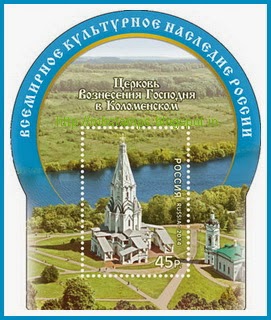 It is a masterpiece of world architecture, the first Orthodox stone church marquee in Russia. Built in 1528-1532 by Italian architects on the right bank of the Moskva River in the village of Kolomenskoye.

The composition of the structure, a total height of 62 m, is centric in nature. The internal space is small, but due to the lack of columns and pillars, it seems quite voluminous.In the Soviet era, the church was turned into a museum complex "Kolomenskoye Estate", and in 1994 - in the UNESCO World Heritage List.
Posted by Mansoor Bolar at 4:30 PM 0 comments 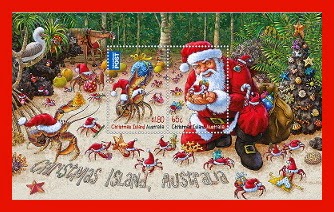 Wishing you all a Merry Christmas !

450th Anniversary of Book-Printing in Russia.

On 3rd September 2014 Russian Post released a stamp to commemorate 450th Anniversary of Book-Printing in Russia.

The stamp depicts a reversal of the book "The Apostle" 1564 stored in the State Public Historical Library of Russia, in the background of Russian Cyrillic letters is seen.

History of the Russian Uniforms.

On 1st September 2014 Russian Post released a set of 4 stamps on Russian Uniforms. 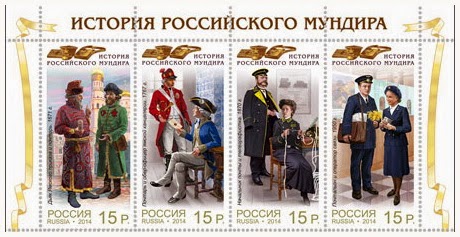 A stamp depicting  Khalkhin Goal was released by the Russian Post on 28th August 2014 to commemorate 75 years of the Victory of the Soviet-Mongolian Troops over the Japanese Aggressors. 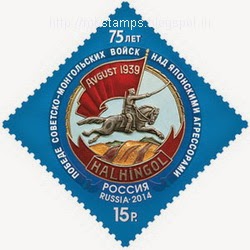 A special cover was released on 17th November 2014 at Bangalore on the occasion World Diabetic day to create awareness about Diabetes.

A special cover was released on 14th November 2014 at Bangalore to celebrate the Karnataka Rajyotsava. 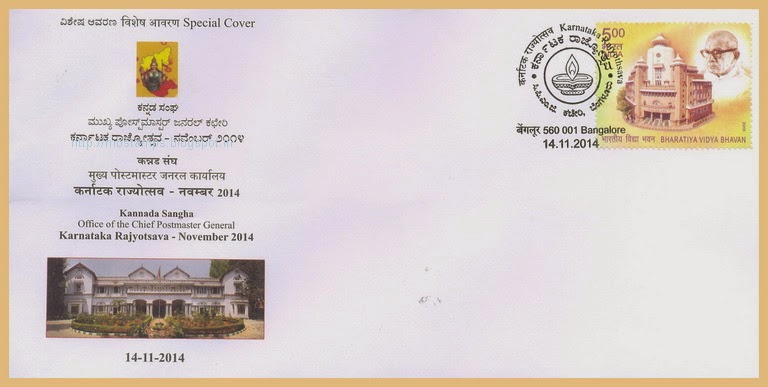 A special cover was released to commemorate the 1st CBS Sub Post Office of Odisha Circle on 9th December 2014 at Rajbhawan, Bhubaneshwar. 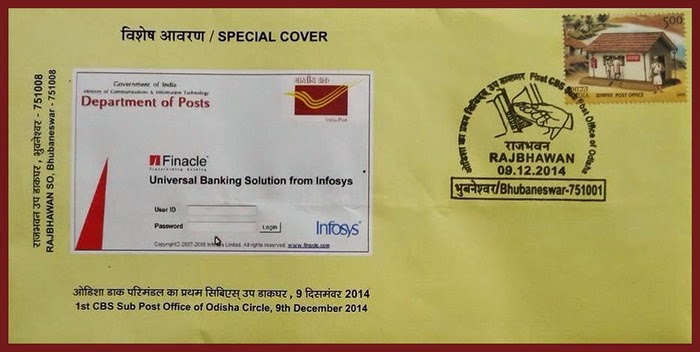 A special cover was released at Madikeri on 14th November 2014 in memory of completion of 100 years of dedicated service of Govt. Model Primary School, Maragodu,  in the field of Education. 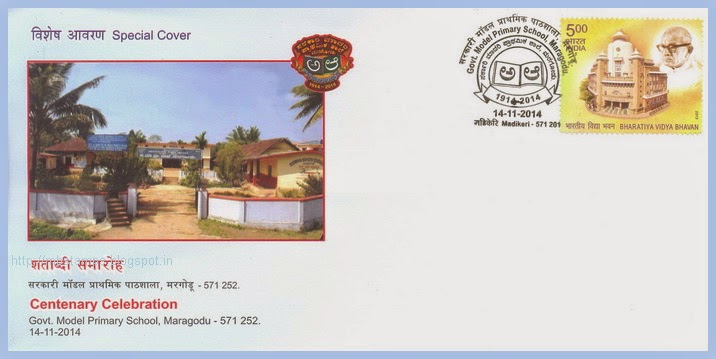 It has been informed by the Karnapex 2015 Secretariat that all the Entry forms received are in the process of scrutiny and the Allotment of frames will be intimated to the Applicants after 18th December 2014. The applicants are to send the frame charges only after the intimation of the number of frames allotted to them.
Assistant Director (BD)
For Chief Postmaster General
Karnataka Circle, Bangalore-560 001
Phone: 22392537/22353393, Email: karnapex2015@gmail.com
Posted by Mansoor Bolar at 9:00 AM 0 comments 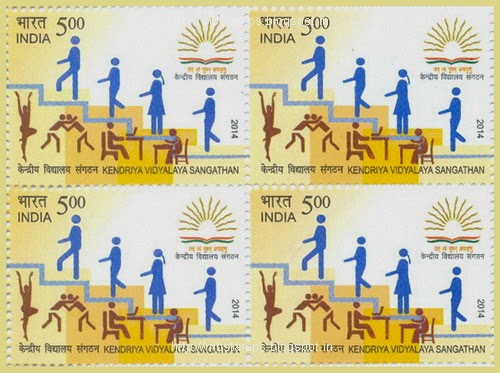 A special cover was released on 30th November 2014 at Kolkata to celebrate the platinum jubilee of  Sri Kashi Vishwanath Seva Samity. 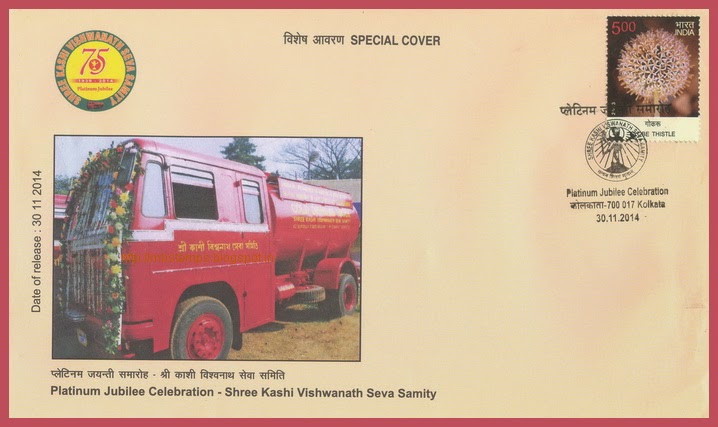 Shree Kashi Vishwanath Seva Samity was established in the year 1939 as a Social welfare Organsiation to provide various special services to the people at large in Kolkata and nearby areas.

It maintains a fleet of water tankers, engaged for supplying filtered drinking water to hospitals and to gatherings of social, religious, political and other nature. It provides valuable services to Gangasagar pilgrims during Sankranti and to yatris going to Tarakeshwar, organises relief camp during flood and earthquake and runs free homeapathy dispensary.

India Post has announced results of Republic Day 2015 Stamp design competition and the winners of competitions are as follows: 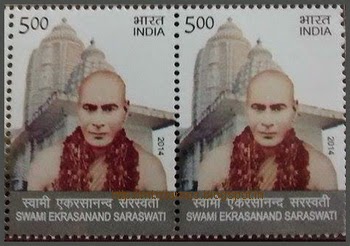 The last date for submission of Entry forms is 15th December 2014 and all the applicants are requested to submit your application at the earliest so that the same may reach the Office by 15th December.

A special cover was released by the Odisha Circle to celebrate the Diamond Jubilee of National Federation of Postal Employees by AIPEU, Group C, Bhubaneshwr Division on 2nd November 2014.

A special cover was released by Maharashtra and Goa Circle on the Bombay Tamil Sangham at Mumbai on 26th October 2014 to celebrate their Platinum jubilee.(1940-2014) 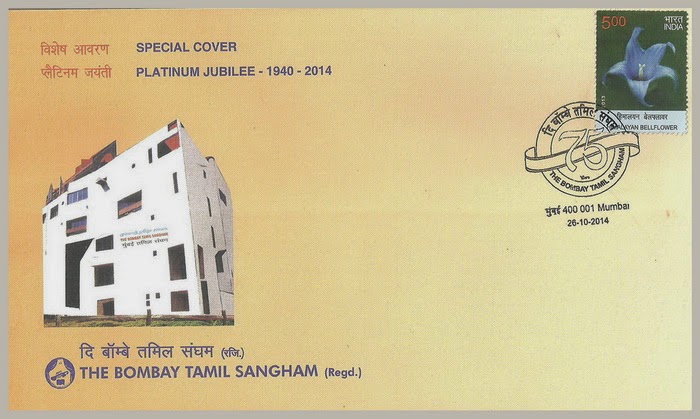 A special cover was released by Maharashtra and Goa Circle on the Convent of Pilar at North Goa on 17th July 2014. 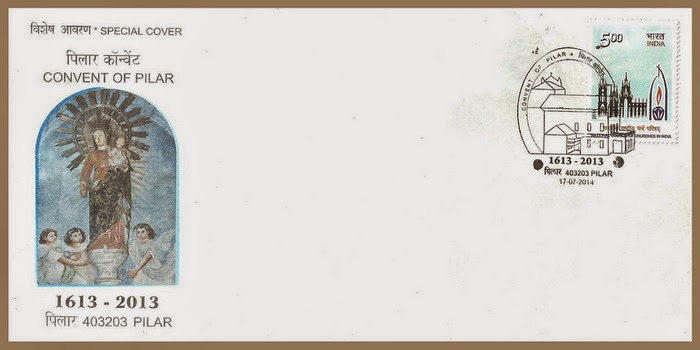 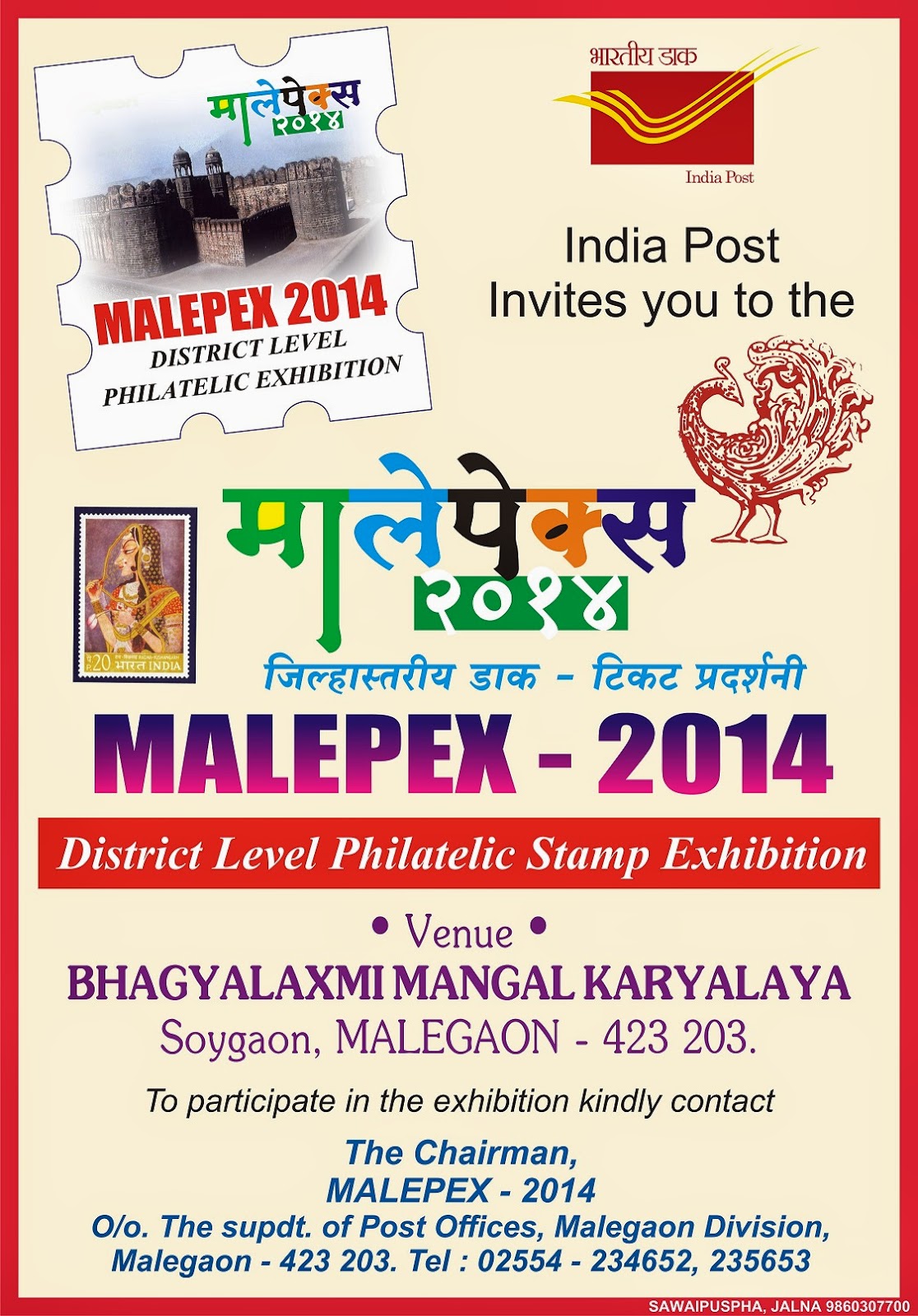