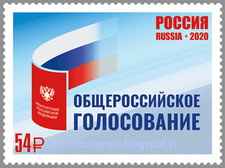 In January 2020, Russian President Vladimir Putin suggested to make amendments in the Russian Constitution and sent a respective bill to the floor. The changes concern the chapters on the federal structure of the country, the President, the Federal Assembly, the government, the judicial authorities and the public prosecution office, and local self-government. These chapters are subject to changes through the adoption of federal constitutional law. Based on the results of the declaration of will of nationals, the President will reach the final decision on signing the amendments to the fundamental law.
Posted by Mansoor Bolar at 10:30 AM 0 comments

Russia Post issued the 7th standard postal stamps of the Russian Federation, Eagles, with the face value of 1 ruble 50 kopecks on 6th May 2020 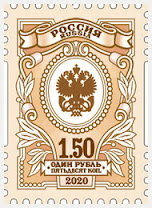 A pioneer of social reforms, Sri Kujugodu Kattemane Venkatramana Gowda, is an eminent personality who strived for the development of Puttur, Bantwal, Bethhangady and Sullia taluks as a political, social and religious thinker. he was the first MLA elected to Madras Assembly from undivided Puttur constituency during the first ever elections of independent India in 1952. He was also elected to Mysuru Assembly in 1957 and in 1963, thereby serving three consecutive terms.
Cover Code: KTK/58/2020.
Posted by Mansoor Bolar at 10:30 AM 0 comments

A special cover on the Lion - Tailed Macaque was released in Puttur on 27th July 2020.

The lion-tailed macaque ( German name Bartaffe - "beard ape") ranks among the rarest and is classified as endangered as per UCN Red List 2007 and Wild Life Protection Act of 1970 of India. It is distinguished by its silver white mane surrounding its head and is seen in the Western Ghat mountains. It has a black tuft at the end that is similar to a lion's tail.
Cover Code: KTK/57/2020
Posted by Mansoor Bolar at 11:30 AM 0 comments

Russia Post issued a stamp on The Berlin Offensive Operation on 6th May 2020. 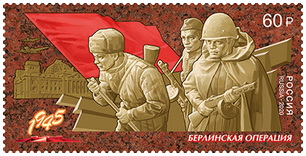 Russia Post issued a souvenir sheet with 3 stamp on the Space Power of Russia on 9th June 2020. 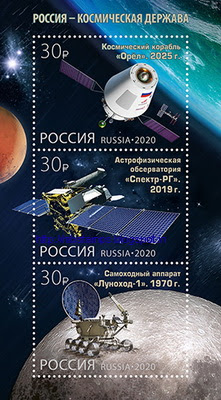 Russia Post issued a stamp on the Koenigsberg operation on 6th March 2020. 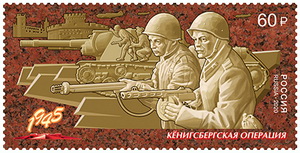 The Koenigsberg operation (April 6-9, 1945) was an offensive operation of the USSR Armed Forces in the course of the Great Patriotic War aimed at defeating the German force grouping and seizure of the fortress city of Koenigsberg.
Posted by Mansoor Bolar at 10:00 AM 0 comments

Russia Post issued a stamp with an image of the Total dictation logo and the portrait of A K. Tsiolkovsky on 2nd April 2020. 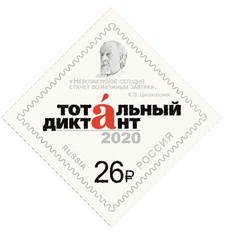 The Total Dictation is an annual cultural and educational event, which offers an opportunity to those who wish to write a dictation in the Russian language, thereby testing their knowledge in the field of spelling and besides, increasing their literacy through the analysis of the mistakes.
Posted by Mansoor Bolar at 10:30 AM 0 comments

A special cover on National Farmers Day was issued on 23rd December 2019 at Belagavi. 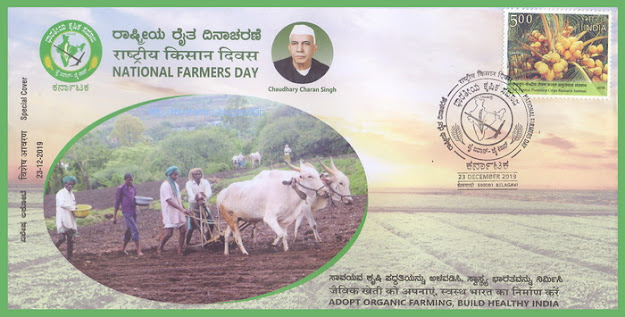 Russia Post released a set of 2 stamp on Sergei Anatolievich Basurmanov and Sergei Aleksandrovich Firsov in the Heroes Of The Russian Federation series on 27th March 2020.

Russia Post issued a stamp and a souvenir sheet on 17th March 2020 dedicated to the 250th anniversary of unification of Ingush Republic with Russia. 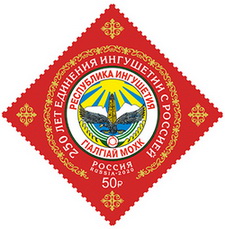 The Republic of Ingushetia is the youngest republic in the composition of the Russian Federation established on June 4, 1992; it is located on northern slopes of the foreland of the Great Caucasian ridge, in its central part. The Republic comprises 4 Regions and 5 cities of republican subordination. The capital is the city of Magas. 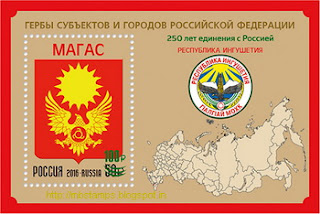 The souvenir sheet has an image of the coat of arms of the city of Magas, on the margins of the postal block there are the national emblem of the Republic of Ingushetia and the map of the Russian Federation; the overprint provides inscription 250th anniversary of unification with Russia and a new face value of 100 rubles.
Posted by Mansoor Bolar at 10:30 AM 0 comments

Russia Post released a stamp on Pavel M. Golubitsky, an outstanding Russian inventor in the field of telephony on 16th March 2020, depicting a telephone set along with his Portrait. 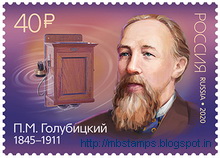 P. Golubitsky’s inventions are as follows: a dipole telephone, a multipolar telephone; a coal powder microphone, a microphone with a comb-like arrangement of coal; a power supply system of subscribers’ microphones with a common battery situated in the central station, which provided the means of building large urban telephone networks; and a telephone switch to interconnect pair-wise several telephone lines. P. Golubitsky was a pioneer of telephone service implementation on railway transport.
Posted by Mansoor Bolar at 10:30 AM 0 comments

A special cover was released on the occasion of the 10th year of the Anitha Educational Trust on 27th February 2020 at R.T.Nagar, Bengaluru. 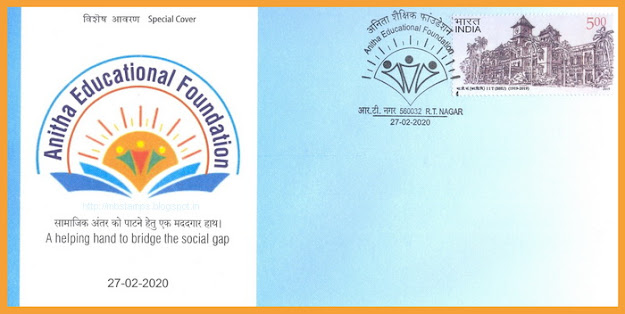 Established in the year 2009, Anitha Educational Foundation renders service for upliftment of underprivileged through Formation¬Education-Leadership for social development and is a helping hand to bridge the social gap by providing support to educational aspirants with inner potential for education.
Cover Code: KTK/49/2020
Courtesy: Suresh Rao, Bengaluru.
Posted by Mansoor Bolar at 10:00 AM 0 comments

Russia Post issued a stamp on 12th March 2020 of the Noble Prize Winner for Physics Zhorez Ivanovich Alferov who is a Soviet and Russian physicist and political figure. The stamp depicts Alferov’s portrait against a semiconductor hetero-junction laser and the scientist’s quotation and sketches. 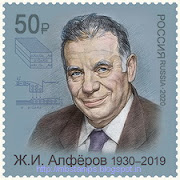 A special cover was released to celebrate the Golden Jubilee of Sri Vidya Mandir Education Society on 23rd January 2020 at Maleswaram, Bengaluru, which continues to impart value based education to the future generations. 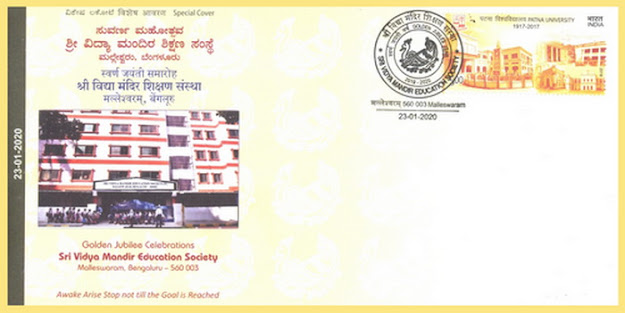 A special cover on the renovated Mysuru Rail Museum located at Mysuru was released on 14th March 2020 at Mysuru. 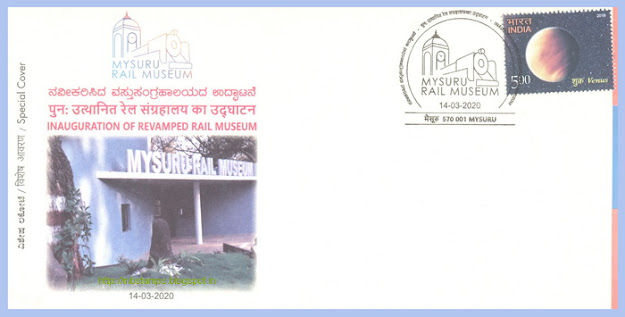 Contemporary style of architecture has been used as backdrop to the exhibits which will standout in the landscape of Mysuru. Originally set up in the year 1979, the revamped museum will provide more opportunities to people to explore the artifacts and enhance their experience.
Cover Code: KTK/54/2020
Courtesy: Suresh Rao, Bengaluru.
Posted by Mansoor Bolar at 10:30 AM 0 comments

Russia Post released a stamp on 10th March 2020 on the occasion of the 100th anniversary of Ivan Nikitovich Kozhedub, fighter pilot depicting the La-7 Fighter Aircraft, which was his fighting plane. 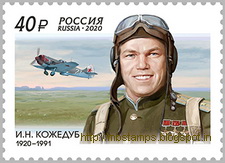 A special cover was released in Mangaluru on 14th March 2020 to celebrate the Golden Jubilee of College of Fisheries, Mangaluru. 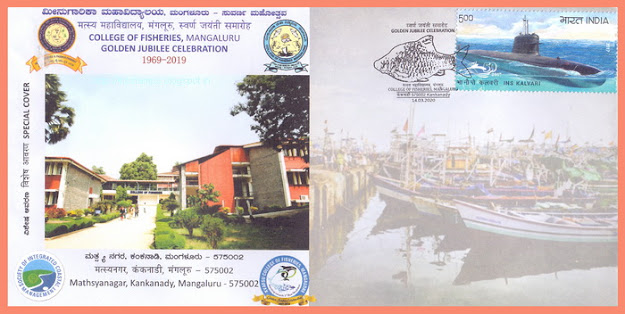 College of Fisheries, Mangaluru under Karnataka Veterinary, Animal and Fisheries Sciences University, Bidar was established in 1969. The College was first in 'South_east Asia and had been providing Bachelor's Master's and PhD degree in fishery sciences. the staff and students of the college are actively involved in implementation of the Blue revolution initiated by the Government of India and are working for the upliftment of the fisher folk.
Cover Code: KTK/50/2020
Posted by Mansoor Bolar at 10:00 AM 0 comments

A special cover on the linguist and literary historian, Sukumar Sen was released on 3rd March 2020 at Kolkata. 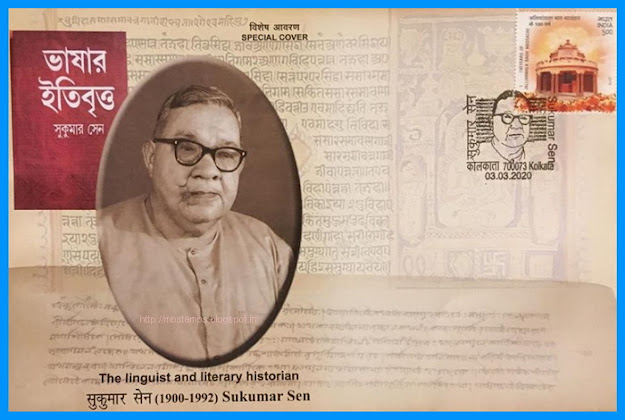