Scientific and research vessel "Vyacheslav Tikhonov" is destined for carrying out geological exploration on the continental shelf, particularly in difficult climatic conditions of Arctic and sub-Arctic seas. The appearance of this modern ship in the Russian fleet will expand the range of services provided to oil and gas companies operating on the Russian continental shelf; its appearance provides access to the most modern technologies of data collection and seismic fleet exploitation, with particular focus on the Arctic conditions.

Ice-class tanker "Timofey Guzhenko" is the third ship of reinforced ice class tankers destined for the marine transportation of oil in the framework of the Arctic energy project "Varandey". The tanker  was accepted into service in February 2009 and began the regular shipments of crude oil from the terminal Varandey to the port of Murmansk.  It is equipped with a system of sensors and measuring devices allowing to monitor the condition of the ship’s body, machinery and systems while operating in the ice and at low temperatures.

The Order of the St. Andrew the First-Called to Mr. Aliyev

Russia Post issued a stamp commemorating The Order of the St. Andrew the First-Called to Mr. Aliyev on 6th May 2013.

Heydar Alirza oglu Aliyev was an outstanding politician and eminent public figure. He was acting as President of Azerbaijan from 1993 to 2003.In 2003 he was decorated with the Order of the St. Andrew the First-Called for the great contribution to consolidation and cooperation between the peoples of Russia and Azerbaijan.

The stamp depicts the portrait of Mr. Aliyev and the Order of the St. Andrew the First-Called. 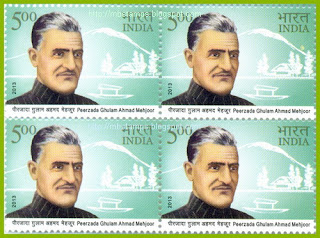 Mahjoor,(Shair-e-Kashmir) is a twentieth century poet of Kashmir. Mahjoor was the poetic name or title of Peerzada Ghulam Ahmad who was born on 11th of August 1887, at a scenic and naturally beautiful village called Mitrigam in the district of Pulwama. He is especially noted for introducing a new style into Kashmiri poetry and for expanding Kashmiri poetry into previously unexplored thematic realms.

1150th anniversary of the mission Saints.

Russia Post released as Souvenir Sheet on 24th May 2013 to celebrate the 1150th anniversary of the mission Saints equal to the Apostles Cyril and Methodius to the Slavic countries. 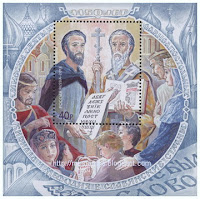 Here's an interesting special cover issued during Stamp Expo-2012 at Patna, Bihar - Feb 10 - 13, 2012 which shows the postman's uniform through Ages.

The cover has the image of Shershah Suri at the left hand corner, was the first emperor to start 'Mounted Post' and built 2000 miles long Grand trunk Road with 1700 shelters for Harkara as Rest House and Postal Relay Station. His memorial is shown in the background.Cancellation is of 'Mounted Post' carrying Mail bags.

The 500th anniversary of the Alexandrovskaya Sloboda.

Russia Post issued a Souvenir Sheet on the occasion of 500th anniversary of the Alexandrovskaya Sloboda on 18th May 2013. 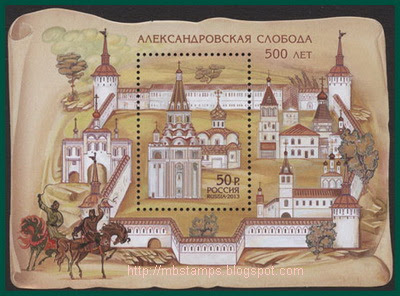 The Alexandrovskaya Sloboda is the oldest residence of Moscow monarchs. By the order of the Grand Prince of Moscow Vasily III the best Russian and Italian artists have built a magnificent palace in Alexandrovskaya Sloboda. Since December 11, 1513 Sloboda became the residence of the Monarch, his family and court. The Embassies from many European countries were received and the most important political and trade agreements were concluded in the chambers of the Alexandrov Kremlin.

The souvenir sheet depicts the ensemble of the Alexandrovsky Kremlin of the XVI century.

Russia Post issued a set of 4 stamp on Warships of Russia on 5th May 2013. 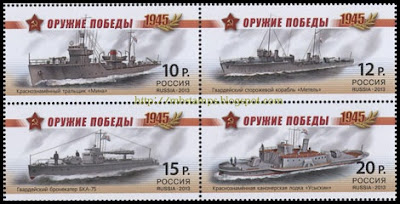 Guard armored boat BKA-75
In 1942 the armored boat BKA-75 participated in battles for Stalingrad. In spring and in summer of 1943 BKA-75 convoyed caravans of transport and at the end of the year it took part in a famous Kerch-Eltigen landing operation.  In 1943 the boat was awarded the title “Guard”.

Russia Post issued a stamp on 26th April 2013 on Postal Vehicles of Russia. 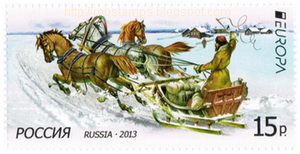 The Russian Post is one of the oldest in Europe, it started in the 9th-10th centuries. The coachman driving was used to deliver written messages, then in the middle of the 18th century it was replaced by the Pochtovaya troika. At first it was a tandem team, later – three horses in a row. Initially three horses (“troika”) were quite a rare case but after some time it gained the popularity and was used for express messengers. Among their advantages there were high speed, endurance, large capacity and good passability.

The stamp depicts the process of winter mail delivery in the 18th century: three horses (“troika”), a postman and the mail bags.

On 20th  May 2013 Malta Post issued a set of three stamp depicting cruise liners that have visited the Valletta Cruise Port in previous years.

Malta has been chosen as the destination for the 6th edition of the European Maritime Day conference organised on the 21st to the 22nd of May. It is therefore fitting to celebrate this occasion with a set of three commemorative stamps depicting cruise liners that have visited the Maltese shores. The stamps depictis cruise liners Riviera, Costa Deliziosa and MS Ryndam respectively.

Russia Post issued a set of 3 stamp on 24th April 2013 on Historical centres of Saint Petersburg.

Saint Petersburg is among the most beautiful and undamaged cities of the world from an artistic point of view.  The Northern capital differs with its logic nature of the space composition, including severe straight streets, spacious squares as well as numerous channels, bridges, embankments, gardens and parks.

The postage stamps depict the building of the Winter Palace, the Admiralty and the St. Isaac Cathedral.