Mother Teresa on US Stamp 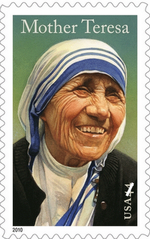 Washington Post reports that Nobel Peace Prize winner Mother Teresa will feature in the postage stamp of us in the year 2010. A stamp in her honor will go on sale on her birthday, Aug. 26, 2010.

The French Post has also included Mother Teresa in its issue program for 2010. 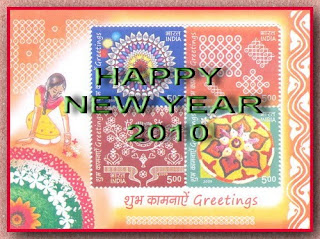 The much awaited STAMPMANIA 2009 has just concluded and the mega event was a great success with many activities and was a festival for stamp collectors and Philatelists from all over India. I congratulate Mr.Prashanth Pandya, Mr.Timir Shah and his team for hoisting a successful event. 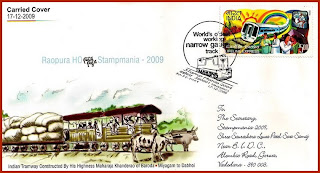 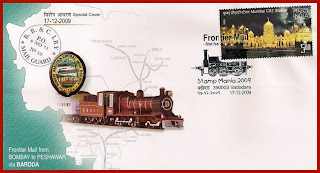 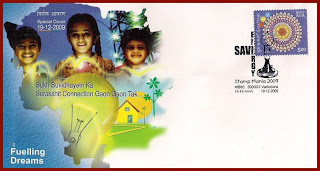 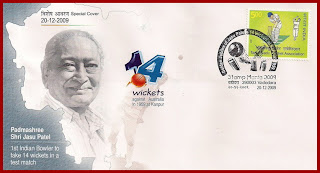 More details, awards and photos can be found in the website of STAMPMANIA 2009
Posted by Mansoor Bolar at 11:45 AM 0 comments 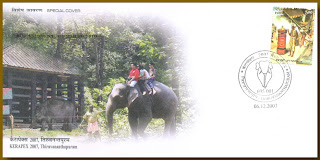 Kodanad is a beautiful village situated on the south bank of river Periyar, about 50 kms east of Kochi, in Kerala, India. The training center is specialised in training stranded baby elephants from the forests across the region. kodanad offers elephant safari to visitors. It is one of the eco-tourism destinations listed by the Government of India.
The special cover was released on the ocassion of Kerapex 2007 in Thiruvananthapuram.
Posted by Mansoor Bolar at 4:59 PM 0 comments 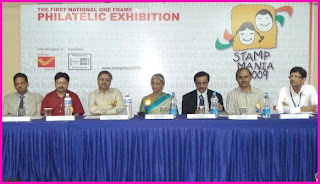 Stampmania 2009 was inaugurated by Chief Postmaster General, Gujarat Circle, Ms.Karuna Pillai by lighting the lamp at Shree Saurashtra Leuva Patel Samaj Building. A special cover was released and presented to Mr. A. K. Srivastava. Mr. A K A Joshi presented a Special carried Cover by Bullock Tram. Dr. Alok Pande released a Stamp Booklet and a souvenir of Stampmania 2009. 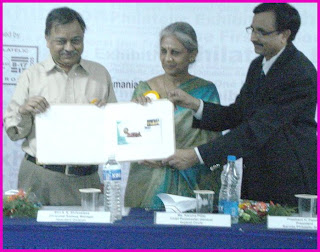 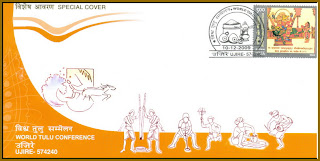 A special cover was released on the ocassion of the Vishwa Tulu conference by The Post Master General of Karnataka Ms.Sandhya Rani on 10th December 2009 in Ujire.

The cancellation has the logo of the World Tulu Conference and the FDC has the line drawings of the features of Tulu land like rice beating, chande vadana (drum beat) pottery, tulu sports and 'kambala' (folk bull race).

To more about this conference visit : http://www.vishwatulusammelana.com 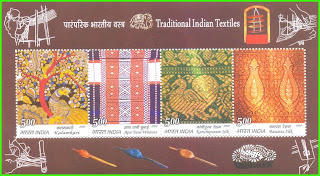 We are now very close to Stampmania 2009. We have already dispatched invitation cards to one and all.

As announced earlier ‘Heritage Walk through Stamps’ has been scheduled on 17th December 2009 at 2.00 pm. We have also planned to make a replica of ‘Bullock Tram’ which was running between Dabhoi and Miyagam from 1862 to 1880 with two bullocks. This float of Bullock Tram will be a part of Heritage Walk through stamps and shall proceed from Vadodara Head Post Office to the Venue of Stampmania 2009. Special Carried Covers will be carried through this ‘Bullock Tram” from Vadodara Head Post Office to Stampmania 2009.

Inauguration of Stampmania 2009 has been scheduled at 5.30 pm on 17th December 2009 after the Heritage Walk through Stamps.

Those who are arriving at Baroda are requested to assemble at Vadodara Head Post Office at 1.30 pm. Philatelic Organisations can bring their banners/play cards to display at Heritage Walk.

We have pleasure to inform you all that Army Postal Service and Royal Mail, U. K. will also have their stalls at Stampmania 2009.

On 19th December 2009, Oswal Antiques will be holding Auction of Philatelic items at Stampmania 2009. Auction Catalogue can be viewed at http://www.indiacoingallery.com/auctions.htm

We invite you all at Stampmania 2009.

On the ocassion of the Vishwa Tulu conference the Department of Posts will bring out a special cover which depicts the features of Tulu land like 'chande vadana' (drum beat) pottery, tulu sports and 'kambala' (folk bull race).

"Tulu" is the regionl language spoken by the people of Dakshina Kannada and Udupi districts of Karnataka. To know more about Tulu and for further reading visit: http://www.vishwatulusammelana.com
Posted by Mansoor Bolar at 10:38 AM 0 comments 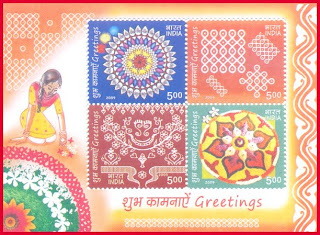 India Post released 4 Greetings stamps , 4 different stamps in denomination of Rs 5/-each, sheet-let at Rs. 180/- and miniature sheet at Rs.20/-
Posted by Mansoor Bolar at 11:45 AM 0 comments