India Post released a set of 2 stamp and a miniature sheet to commemorate the 800th Urs festival of Dargah Sharif Ajmer on 27th May 2012. 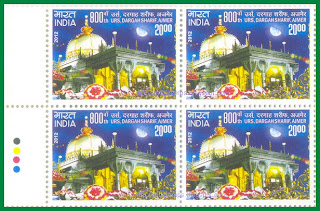 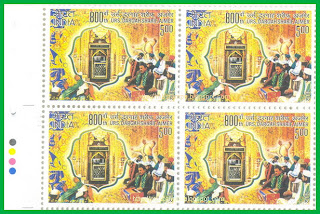 The Man at the Wheel

Statue honours seafarers Raised in 1936 as a memorial to those seafarers who perished at sea, the statue ‘The man at the wheel’ is the oldest outdoor piece of art in Mariehamn.

Russia released a set of 5 stamps on 7th May 2012 depicting Defense Personalities in the series "Heroes of Russian Federation". 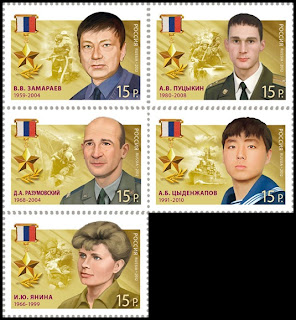 Valery V. Zamaraev - deputy head of search and rescue service of the State Central airmobile rescue group MOE Russia. For courage and heroism displayed during the liberation of hostages in Beslan, was posthumously awarded the title Hero of the Russian Federation

Alexey Putsykin - Deputy Commander for Armaments air assault company. He was posthumously awarded the title Hero of the Russian Federation for their courage and heroism in the performance of military duty in the North Caucasus region.

Dmitry Razumovsky - Head of the Office of the "B" ("Vympel") FSB Russia SPC. For courage and heroism in the performance of specific tasks, posthumously awarded the title Hero of the Russian Federation

Aldar Batorovich Tsydenzhapov - electromechanical engineer battalion combat survivability of the destroyer "Quick," Pacific Fleet. For courage and heroism in the performance of military duty, was posthumously awarded the title Hero of the Russian Federation

Irina Ioannina - nurse, medical teams operating companies use the MIA of Russia. For heroism, courage and sacrifice shown during the rescue of wounded soldiers, was posthumously awarded the title Hero of the Russian Federation

A registration fee Rs 750/- (seven hundred fifty) along with My Stamp and Rs – 450 (Four hundred fifty only) without My Stamp have been kept to be charged from the participant for successful completion of the events. 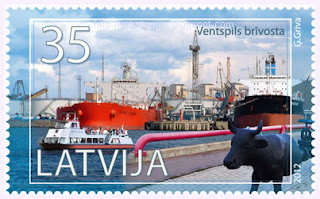 On 11th May 2012, Latvia Posts released a stamp on Free Port of Ventpils.The new stamp shows the promenade of Ostas Street in Ventspils City, where the industrial daily life of the port converges with the city environment. The first-day cover depicts the work of the port, while the postmark incorporates the logo of the Free Port. 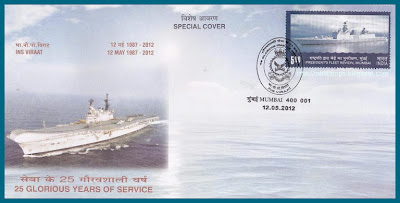 A special cover was released on 12th May 2012 on the occasion of 25 years of glorious service of Indian Naval Ship Viraat in the Indian Navy. INS Viraat is the only Aircraft carrier of the Indian Navy which operates Sea Harrier fighter jets, Sea King, Kamov and Chetak helicopters. 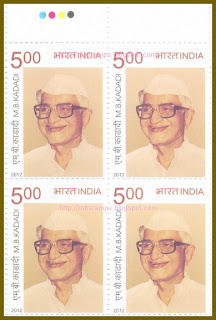 India Post issued a commemorative stamp of M.B.Kadadi on 17th May 2012. 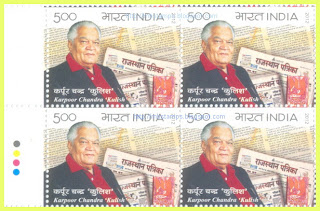 India Post issued a commemorative stamp on journalist Karpoor Chandra 'Kulish' on 16th May 2012. He was the founder of Rajasthan Patrika Group which is one of  India’s leading Hindi Media Groups.
Posted by Mansoor Bolar at 10:59 AM 0 comments

This special cover was released on 4th April 2012 as continuation of MGM Group's efforts to earnestly and actively protect, promote and propagate Odihsa's natural beauty, rich architectural heritage, its green cover and diverse wild life habitats as a part of the group's social responsibilities. 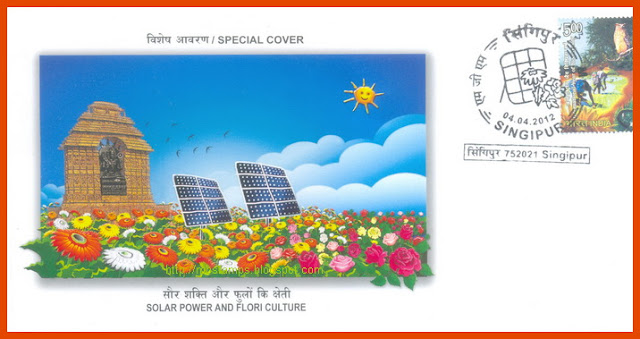 MGM group, a diversified business house of Odisha, is dedicated to putting into best use Odisha's precious natural resources in a sustainable manner and adding value through forward integration. In keeping with its commitment to ec0-friendly and responsible investments, the group has also made a foray into h-tech horticulture and renewable energy generation.

You can contact the Chief Postmaster General, Bhubaneshwar, for the special covers.

Putin takes office as President of the Russian Federation

On May 7, 2012, a stamp was released to commemorate the occasion VV Putin taking office as President of the Russian Federation. 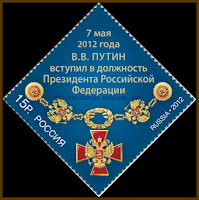 On March 4, 2012, elections for the President of the Russian Federation were  held and V. Putin, who served as Prime Minister Won the same. The new president takes office on the 30th day after the official announcement of the Central Election Commission of the election results.

On 17 April 2012 Israel Post issued a set of 3 stamps with tabs, commemorating the renaissance of Jewish Seamanship and some of its prominent captains and sailors.

HEHALUTZ (The Pioneer) steamship that was acquired in 1919 to transport goods along the eastern shores of the Mediterranean, is shown on the background of Old Jaffa.The tab depicts the Gozal (Fledgling) motorized sail vessel that was acquired in 1927 by the Nesher Cement Company to carry cement, as well as Captain Zeev Hayam (Sea Wolf) who commanded its voyages along the eastern Mediterranean.

SARAH A was a training vessel owned by the Nautical School for Jewish Students which was established in Civitavecchia, Italy, in 1934... The vessel visited the Haifa port in 1936. The stamp also depicts Jeremiah Helpern, one of the founders of the Beitar youth movement´s maritime department and the initiator of the Nautical School.The tab depicts a training rowing boat and the emblems of the Zevulun Seafaring Society.

HAR ZION was one of the Palestine Maritime Lloyd company which were carrying both passengers and freight... They sailed on the Haifa-Istanbul-Constanza route, exporting citrus fruit and importing, among other things, wood and cattle... The Har Zion was commanded by veteran seaman Captain Erich Hirschfeld.The tab depicts the Tel-Aviv ship, owned by Arnold Bernstein from Hamburg, which sailed the Haifa-Trieste route from 1934-1936... It also commemorates engineer Emanuel Tuvim, one of the founders of Hevel Yami Le´Yisrael, an organization thet promoted maritime education among the youth of Eretz Israel.
Posted by Mansoor Bolar at 11:18 AM 0 comments 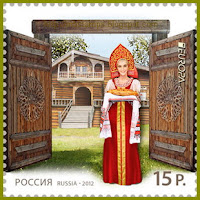 Russia released a stamp on 4th May 2012 in the Europa Series. The stamp depicts a young lady in traditional costume with bread and salt in her hand.Bread and salt is both a greeting and an expression of hospitality, good wishes and prosperity.

Mr. Daniel Monteiro, who hails from Brahmavar, member of D.K.Philatelic and Numismatic Association, Mangalore,  has entered the ‘Guinness World Records’ for his largest collection of stamps featuring birds. His total collection consists of 4911 stamps from 263 countries.  The old record was in the name of Mr. Paul-Erwin Oswald of Germany. 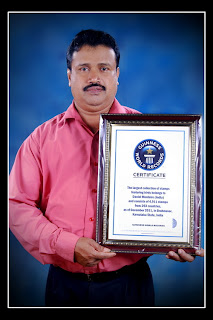 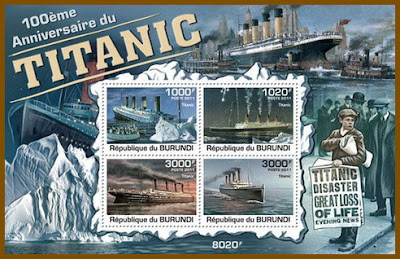 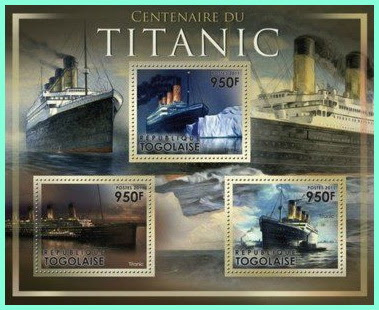 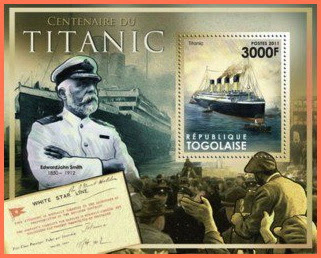 Russia released a stamp on 27th April 2012 under the series XXII Olympic Winter Games in Sochi - depicting places of interest to Tourists in the Black Sea coast of Russia. The stamps are in the format of Miniature sheet, sheetlets and mixed sheetlets and in different languages including English. The description of places in the stamps are briefly explained in an adjoining tab. 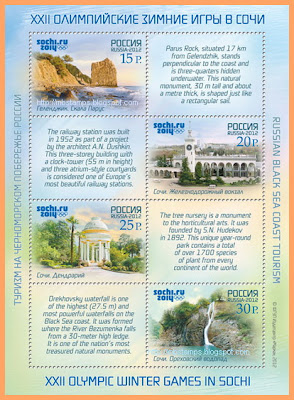 The Association of War Veterans and BB ATS

Russia Post released a stamp on 26th April, 2012 which depicts the emblem of the Association of War Veterans and BB ATS Russia. 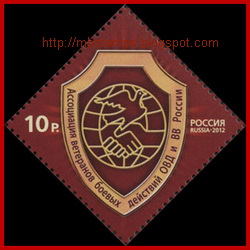 All-Russian public organization Association of combat veterans of internal affairs bodies and internal troops of Russia was created April 28, 1992. The Association brings together officers, soldiers and pensioners of the Interior Ministry, who participated in combat operations by a decision of the Government of the USSR and the Russian Federation. The motto of the Association: "We are loyal to the oath and the Motherland." Main purpose of the organization - social support and legal protection of veterans with disabilities who participated in the fighting in the territories of other states and to armed conflicts on the territory of Russia, as well as their families.