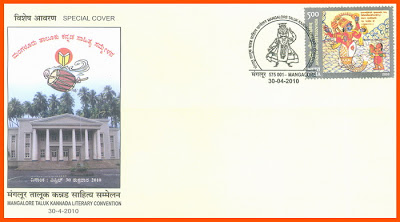 One day Mangalore Taluk Kannada Literary Convention was inaugurated on 30th April 2010 at Mangalore Town Hall. A special cover was released on the occasion. The cachet shows the photograph of Mangalore Town Hall and the cancellation depicts the Yakshagana artist. ( local folk art / dance drama)
Posted by Mansoor.B at 3:13 PM 0 comments 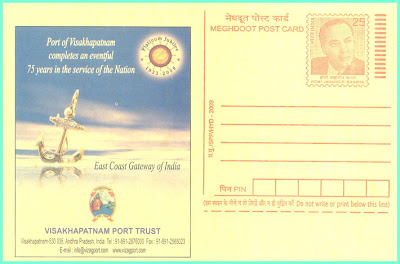 Meghdoot card released for the completion of 75 eventful years in the service of Nation by Vishakapatnam Port, known as the Gateway to the East Coast of India.
Posted by Mansoor.B at 9:31 AM 0 comments 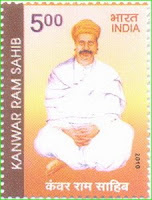 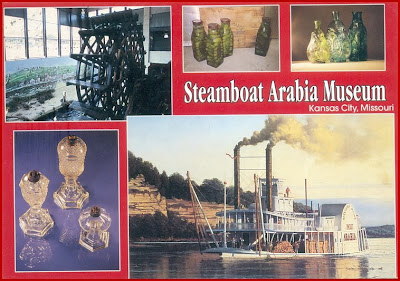 In 1856, after striking a submerged tree trunk, 'The Arabia' sank with its 220 tons of cargo into the Misseuri River. In 1988, the Hawley family began excavation and three years later they opened the Steamboat Arabia Museum, displaying the "Treasures of the Steamboat Arabia". Although only half of the cargo - housewares, tools, food and personal effects - is on display restoration work still continues.
Posted by Mansoor.B at 12:11 PM 0 comments

Links with the Falkland Islands.

On 14th February 1984, a set of 2 stamps was released by The Isle of Man on the ship Lady Elizabeth known as “ The Lady” which was wrecked off the Falkland Island in 1913 and was later beached in her present position at the east end of Port Stanley Harbour. 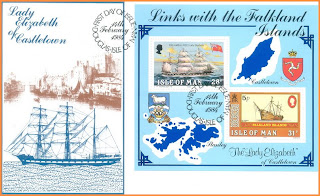 The first stamp depicts the Lady Elizabeth which was built in 1879 in Sunderland. The second stamp is the picture of the ‘Shipwrecks’ stamp already issued by the Falkland Islands which shows the wrecked hulk of the Lady Elizabeth. The stormy waters of the South Atlantic have proved graveyard for many ships and the seas around the Falkland Islands shows evidence of the dangers faced by sailors in those treacherous seas. The two small Island communities, the sea an ever-present background to their lives, are joined in this piece of maritime history.
Posted by Mansoor.B at 9:38 AM 0 comments 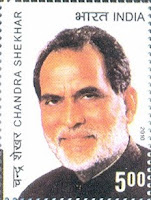 A commemorative stamp on Chandra Shekar was released 17th April 2010.He was the Prime Minister of India for a short period.
Posted by Mansoor.B at 4:12 PM 0 comments 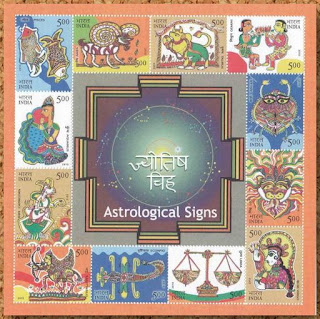 India Post issued a set of 12 stamps on 14th April 2010 on Zodiac Astrological signs. The designs of the stamps are rooted in Indian folk art and depict the 12 zodiac sign against four base colours which reflect the elements of earth, air, fire and water.( The above picture which is not in any order shows only eleven stamps due to unavailability of a stamp )
Posted by Mansoor.B at 10:30 AM 0 comments

Many traditional boats are still used for fishing in low scale in different parts of the world even today, specially in the rivers and lakes.These boats are still operated using  sail and oars. These boats vary from place to place according to the geographical needs.Early fishing vessels included rafts, dugout canoes, reed boats, and boats constructed from a frame covered with hide or tree bark, such as coracles.Today, large scale fishing in the deep seas are done by mechanised trawlers and huge boats which can stay in the seas for many days.
Posted by Mansoor.B at 3:09 PM 1 comments

A special cover was released on 5th April 2010 at Bangalore on the occasion of National Maritime Day. The release of the cover was sponsored by the Naval Philatelic Society. 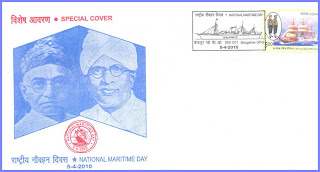 As per the norms of the society the Life members of the NPS received one special free of charge and I am pleased to present the same here.The cachet of the cover has the photograph of Narottam Morarjee and Walchand Hirachand who played a stellar role in the revival of Indian Mercantile Marine.
The cost of the cover for all other collectors will be Rs.25/- including postage and handling.Those who are interested in the same can contact the Secretary of NPS at nanasha@rediffmail.com
Visit the blog of Naval Philatelic Society.
Posted by Mansoor.B at 9:08 AM 0 comments

Today I have posted a scan of a beautiful FDC which I received from a friend in Finland. I thank Monique for this FDC. 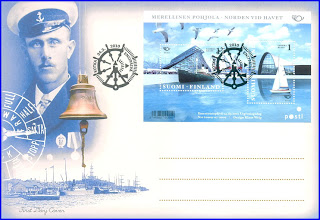