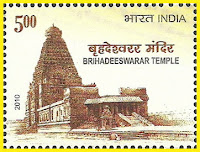 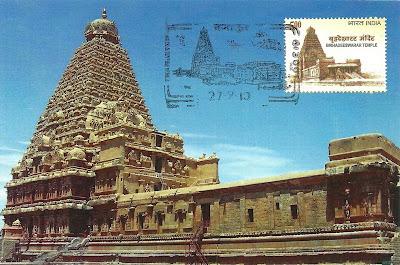 A commemorative stamp was released on 26th September 2010 to celebrate the millennium of the Chola-built Brihadeeswara Temple at Tanjavur,One of the greatest glories of Indian architecture.The temple is part of the UNESCO World Heritage Site “Great Living Chola Temples”. The Brihadisvara temple is a monument dedicated to Siva at Thanjavur in the Indian state of Tamil Nadu . It is the world’s first complete granite temple, which is also known as the Big Temple.
For further reading :About The Big Temple

Thanks to Mr.Kasinath of  My Water Craft Philately , for further inquiry about the Maxi card you may contact him.

This Exhibition will feature several collections of rare and valuable stamps offering unique insights into Arabic cultural history, and will be open to all visitors to Mega Mall's Garden Court from 10A M to  10PM. Entrance is free.

For further News : The National
http://www.ameinfo.com/
Posted by Mansoor Bolar at 12:03 PM 0 comments 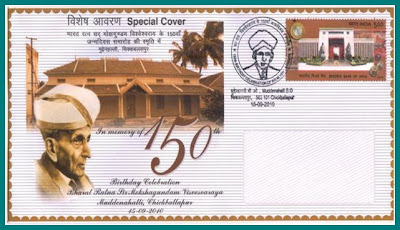 A special Cover in memory of 150th Birthday Celebration of Bharat Ratna Sir Mokshagundam Visvesvaraya was released in Chickballapur on 15-09-2010 by Karnataka postal circle, Muddenahalli, chickballapur.
Thanks to Mr.Jagannath Mani, Bangalore.
Posted by Mansoor Bolar at 10:49 AM 2 comments

A Special Cover was released on 29 Aug 2010 in Tiruchirappalli  to mark Silver Jubilee Of Shrimati Indira Gandhi College , Tiruchirappalli . This College for Women  was started on 01 Oct 1984.

Thanks to Mr.K.Veeraraghavan, T.N.
Posted by Mansoor Bolar at 12:29 PM 0 comments

Royal Mail will issue a set of 6 stamps on 17 September featuring common Garden Birds of UK. The six illustrations are by Robert Gillmor from Cley are to be issued from the new self-service terminals in post offices up and down the country. 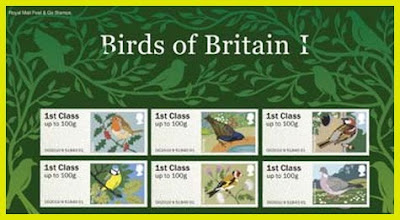 Melanie Corfield, Royal Mail's head of external relations for London and the South East, said: "Birds have long been one of the most popular thematic subjects and for this first set of pictorial post and go stamps we wanted to celebrate the beauty and variety of the UK's birdlife, starting with the birds that are frequently seen in gardens."
Posted by Mansoor Bolar at 12:30 PM 0 comments

Special Cover released in Bangalore when the Queen's Baton for the Common Wealth Games arrived at Bangalore on 2nd September 2010. 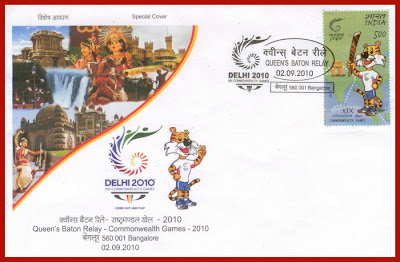 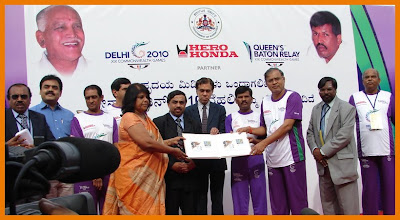 Thanks to Mr.Jagannath Mani, Bangalore.

Mother Teresa on US Stamp. 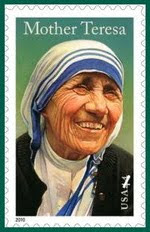 Mother Teresa is being recognized for her humanitarian work with the issuance of a new U.S. postage stamp today, 5th september 2010.The 44-cent stamp showing a portrait of the Roman Catholic nun is being released at a ceremony today at Washington's National Shrine of the Immaculate Conception.
Mother Teresa, an ethnic Albanian, was born Agnes Gonxha Bojaxhiu on Aug 26, 1910, in Skopje in what is now the Republic of Macedonia.
Mother Teresa won the 1979 Nobel Peace Prize for her half-century of work with the sick and destitute of India and other areas.She had been a citizen of India since 1948. She died on 5 September 1997 in Kolkata. On 19 October 2003, Mother Teresa was proclaimed an “icon of the Good Samaritan” by Pope John Paul II.She was declared an honorary U.S. citizen by a joint resolution of Congress in 1996.
Posted by Mansoor Bolar at 9:30 AM 0 comments

Dr.Y.S.Rajasekhara Reddy was the Chief Minister of Andhra Pradesh. Though he was a doctor, he was known to common people as a Politician. As Chief minister he initiated several programmes for the benefit of the common people, farming community, rural youth and rural masses.His policies were people oriented and to improve their livelihood. 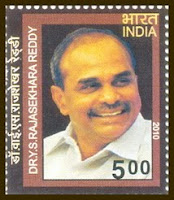 The 125th anniversary of birth of N.N. Zubov

Nikolay Zubov (1885-1960) is a naval officer, hydrographer, oceanologist, Arctic explorer.  In 1935 he led the scientific part of the first Soviet high-altitude expedition on the icebreaker "Sadko".Nikolay Zubov made the great contribution to the development of the native oceanography. He was among the first to put forward and develop the problem of ice forecasting in the Arctic seas, he also founded the Department of Oceanology in Moscow Hydrometeorological Institute and Moscow State University.

The stamp depicts a portrait of N.N. Zubov and the icebreaker "Sadko".
Posted by Mansoor Bolar at 11:44 AM 0 comments