A special cover was released on Chatrapati Sambhaji Maharaj on 14th May 2015 at Pune. 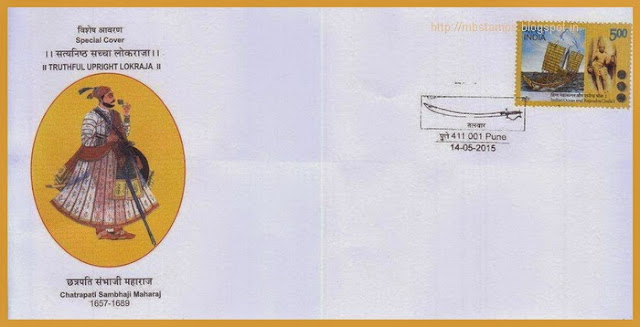 A special cover was released on konkani actor Al Jerry Braganza, who is known as the father of konkani Cinema on 24th April 2015 at Mapusa, Goa. 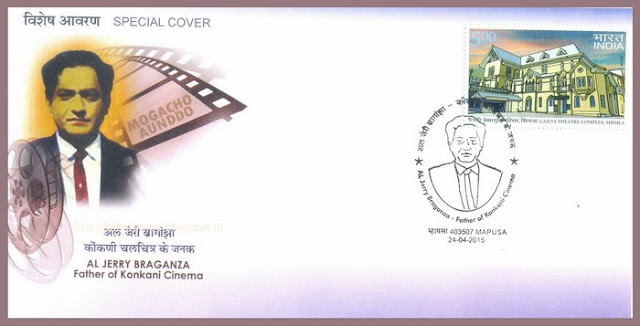 The 70th Anniversary of the Victory in the World War II 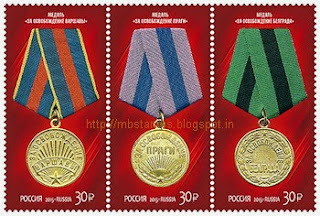 Posted by Mansoor Bolar at 9:35 AM 0 comments

The result of the Stamp Design Competition on the theme "Women Empowerment" has been announced.

A special cover was released on 9th May 2015 at Virajpet to celebrate the 300th anniversary of Arameri Kalancheri Mutt.The cover depicts the picture of Sri. Lingarajendra Prasad Nilaya, being inaugurated on this ocassion which can accommodate about 300 students.

A special cover was released on 17th May 2015 to commemorate the "RCB-Game for Green" match held at M.Chinnaswamy Stadium, Bengaluru. 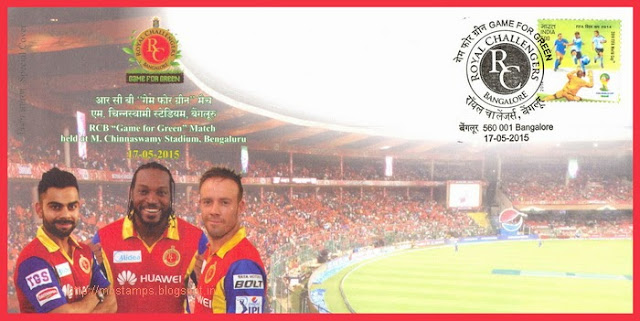 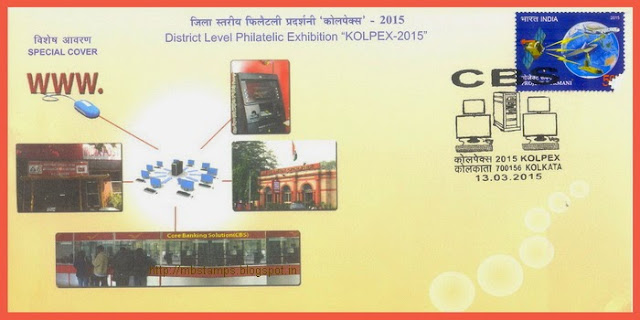 A special cover was released on 14th April 2015 to commemorate the brave martyrs in the line of duty on the occasion of National Fire Service Day at Panaji, Goa. 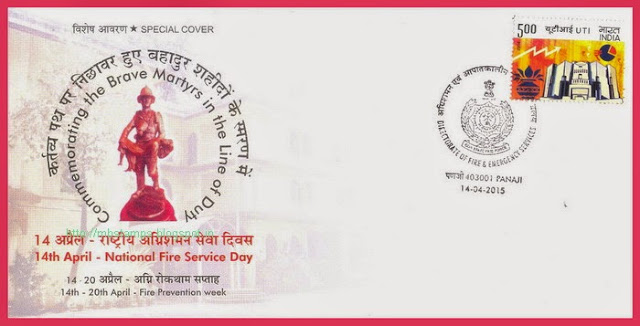 Hong Kong Post released a set of 6 stamp and a vessel-shaped souvenir sheet to highlight the theme of this set of stamps on 21st May 2015.

Hong Kong is a thriving port, renowned as one of the busiest in the world. To maintain the efficient operation of the port and provision of other marine services, various government departments maintain their own specialised vessels which are designed to perform a diverse range of duties, including patrolling, inspection and quarantine, water quality control, firefighting and hydrographic works, among others. 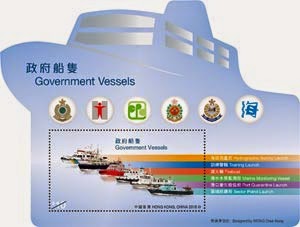 Department of Health — Port Quarantine Launch : The $2.20 stamp shows a port quarantine launch, "Port Health", from the Department of Health. It commenced service in 2003 and mainly takes personnel including doctors, nurses and health inspectors, to vessels within Hong Kong waters to perform port health services.

Hong Kong Police Force — Training Launch : The $3.70 stamp features the training launch "Sea Panther" belonging to the Hong Kong Police Force. Commissioned in 1988, it was first deployed as the Divisional Command Launch in Marine East Division, responsible for law enforcement at sea in the region. It later became the Marine Region Training Launch, a training platform for Marine Police officers in 2001. 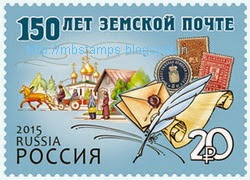 Zemsky mail - a special service created for correspondence in the areas which did not have government-mails. The first post office was established in zemskaja Vetluga county Kostroma province in the spring of 1865. Each zemskoe post office acted only within their administrative district. To pay for the costs the county mails were allowed to have their own brand, but with the prerequisite neither a drawing nor color should not be similar to the official marks, as well as in their design could not use the emblem of the state postal service.

A special cover was released to celebrate the golden jubilee of the Postal Training Centre, Mysuru on 20th May 2015. Training and development is a function of human resource management concerned with organisational activity aimed at bettering the performance of individuals and groups in organisational setting. 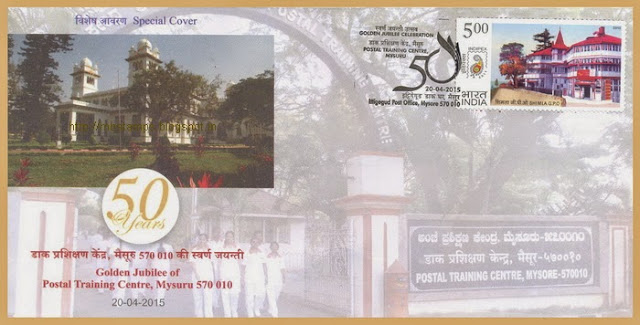 A special cover was released in Bangalore on the ocassion of the celebration of 175th Anniversary of  St. Paul's Church, Bangalore. 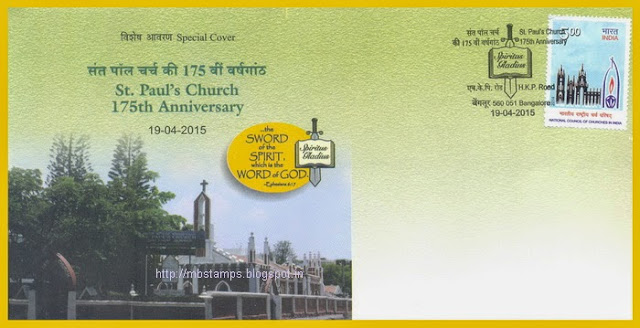 St. Paul's has the distinction of being the very first Tamil Anglican Church in the erstwhile Mysore State. The Church was consecrated on 33rd March 1840 by the Lord bishop of Madras. Since then the Church is rendering service to the people and imparting knowledge through education to poor masses.

Posted by Mansoor Bolar at 9:20 AM 0 comments

The sinking of Lusitania

An Post of Ireland marked the centenary of the WWI sinking of the passenger liner Lusitania with a special commemorative stamp issue on 7th May 2015. The stamps (68c and €1) feature specially commissioned paintings by Vincent Killowry capturing the dramatic scenes of the ship at sail and then listing badly before sinking.

The sinking of the Lusitania took place on this day (May 7th) approximately 14 miles off the Irish coast near the Old Head of Kinsale. The ship was struck by a single torpedo and sank quickly after a second explosion. Although there were sufficient lifeboats on board, the badly listing ship made it impossible to execute a full evacuation. Of the 1,959 people on board just 761 were saved, many of them by boats launched from Kinsale, Cobh and Cork city.


Lusitania was launched by the Cunard Line in 1906, as an ocean liner, famous for its luxury and speed. It was, for a brief time, the largest ocean liner in the world and held the record for crossing the Atlantic. Prior to the sinking Germany had declared the seas around Ireland as a war zone and had placed newspaper advertisements warning people not to sail on the ship. Among the casualties of the sinking was Hugh Lane, art collector and benefactor, founder of Dublin’s Municipal Gallery of Modern Art, the first public gallery of modern art in the world. 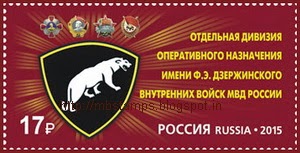 Dzerzhinsky Independent Operational Purpose Division of the Ministry of Internal Affairs of Russia, a stamp was released on 21st March 2015 by Russian Post.

A special cover was released on 10th April 2015 to celebrate the golden jubilee of Netaji High School, Ballamavati. Netaji Education Society was founded by the farsighted elders of Changettira family in 1965 generously donating 10 acres of land for the construction of the School. 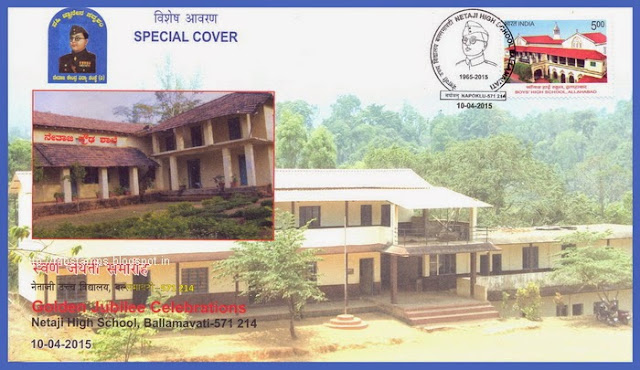 A special cover was released on 1st April 2015 at Mathura on the lathmaar holi of Mathura.

A special cover was released to commemorate the golden jubilee year of Rotary Bangalore North on 9th May 2015. 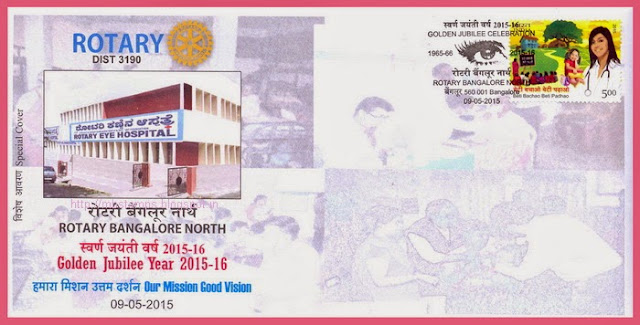 A special cover was released on 8th May 2015 to celebrate the centenary of Gandhi's first visit to Bengaluru. Mahatma Gandhi had first visited Bengaluru on 08.05.1915. 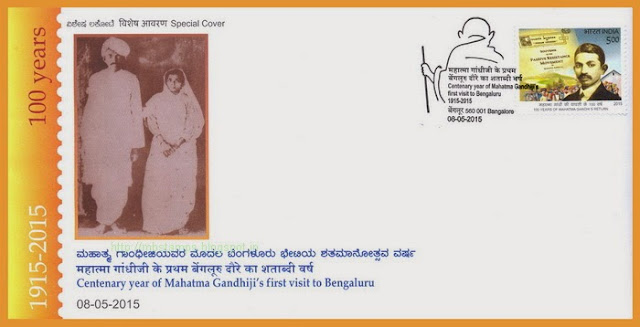 Sabarmati River has been an integral part in the life of Ahmedabad since the time the city was founded in 1411 along the river banks. Besides being an important source of water, it provided a backdrop to cultural and recreational activities. 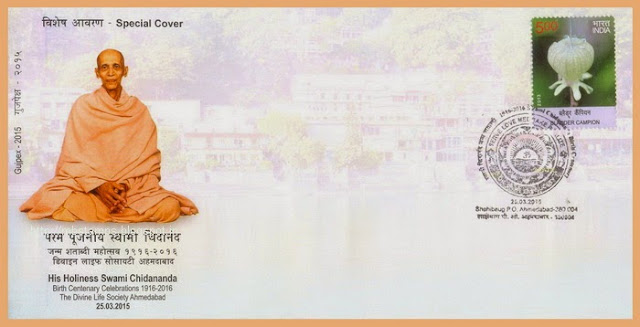 Swami Chidananda Saraswati  was President of the Divine Life Society, Rishikesh, known in India as a yogi and spiritual leader.

The Quit India Movement was a major milestone after the Salt Satyagraha in the history of Indian independence struggle. It was a civil disobedience movement launched on 8th August 1942 with Gandhiji’s call for immediate independence.

A special cover was released on 23rd March 2015 on 10th Centenary of Shri Hemachandracharya at Shahlbaug, Ahmedabad. 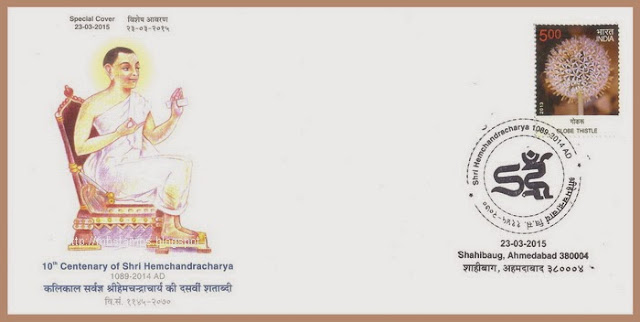 A special cover was released in Mumbai on 20th April 2015 to celebrate the Civil Services Day. 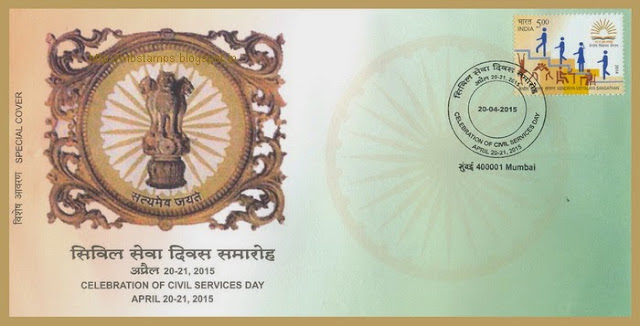 Evgeni Osipov (1913-1943) - the captain of the third rank, the title of Hero of the Soviet Union was awarded for exemplary performance of command assignments and for displaying courage and heroism in World War II. He was awarded the Order of Lenin, World War I level.

Alexander Marinesco (1913-1963) - the captain of the third rank, the title of Hero of the Soviet Union (posthumously) awarded for bravery and heroism in the fight against the Nazi invaders in World War II. He was awarded two Orders of Lenin, two Orders of the Red Banner, medals "For Military Merit" and "For the Defense of Leningrad".

A set of two stamp was released on 18th March 2015 on Military Counterintelligence Officers by Russia Post. 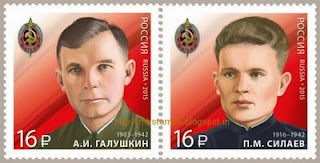 Pavel Silaev (1916-1942) - the military counter-intelligence of the Black Sea Fleet, junior political officer, a member of the defense of Sevastopol, was killed in the bombing of German marching Staff.
Posted by Mansoor Bolar at 4:41 PM 0 comments

A set of 6 special stamp was released by Russia Post on 22nd February 2015 on Cities of Military glory. The stamps commemorates cities like Lomonosov, Maloyaroslavets, Mozhaisk, Petropavlovsk-Kamchatsky, Taganrog and Khabarovsk. 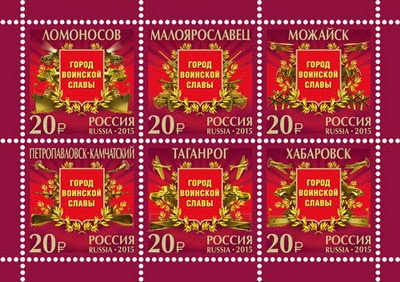