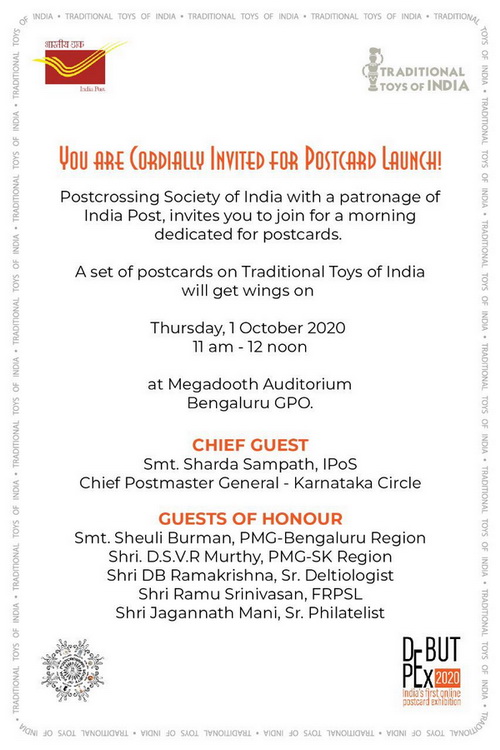 Russia Post released a set of 4 stamp on the Embroidery works of Russia on 1st June 2020. 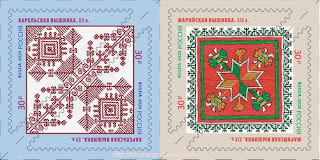 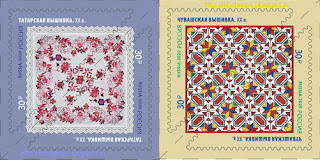 Embroidery was used for decoration of human clothes and household articles, such as tablecloths, towels, curtains, napkins. For the peoples of Russia, embroidery was one of the most essential forms of artistry. The best embroidery artworks feature clarity, emotional frankness of expression, and high culture of lines, rhythm and color.

A special cover was released to educate the importance of Plasma Donors in Pune on 15th August 2020. 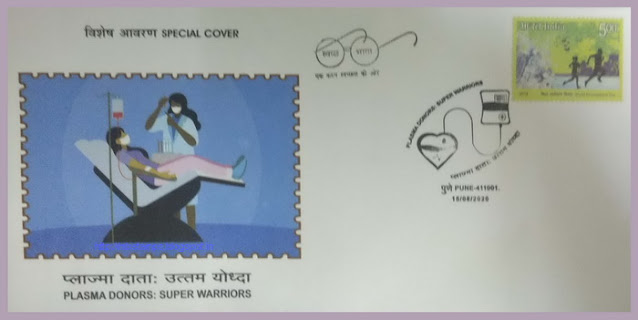 A special cover was released on  the occasion of the 20th anniversary of Micro vision in association with Department of Post at Bengaluru on 26th September 2020. 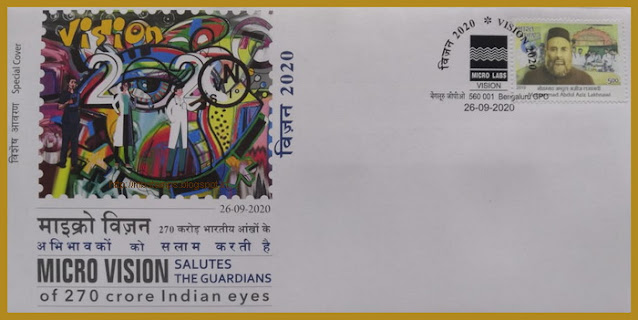 Micro Vision wishes to acknowledge the role of each and every Ophthalmologist who has always nurtured them to be loyal and worthy partners in achieving their mission of Vision 2020. Vision 2020 is a global initiative that aims to eliminate avoidable blindness by the year 2020.
Cover Code:KTK/68/2020

USPS released a stamp on 17th September 2020 to celebrate the 400th anniversary of the Mayflower’s arrival off the coast of New England in December 1620. 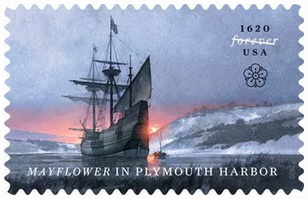 On Dec. 16, 1620, a ship that carried 102 English passengers completed a perilous voyage across the Atlantic Ocean from Plymouth, England, and anchored offshore of today’s Plymouth, MA. The Mayflower’s passengers would become known to us as Pilgrims, and the story of their settlement in America would inspire future generations and become part of the larger story of the nation’s founding ideals.

The Mayflower Compact, Plymouth Rock, Thanksgiving — all became part of the enduring legacy of this tiny band of settlers, whom we honor on the 400th anniversary of their arrival in America.
Posted by Mansoor Bolar at 10:00 AM 0 comments 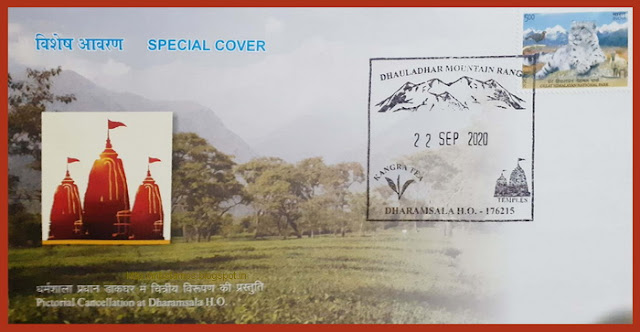 Also refer my blog entry for the earlier special cover of Philatelic Bureau . 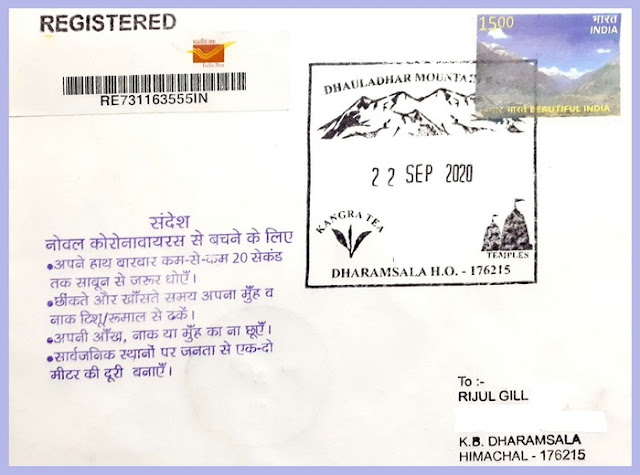 Courtesy: Rijul Gill, HP, who is also the designer of this special cover.
Posted by Mansoor Bolar at 10:30 AM 0 comments

A special cover on the Postal Corona Warriors was released on 15th August 2020 at Simla G.P.O to acknowledge the service of Postmen during the Corona Pandemic. 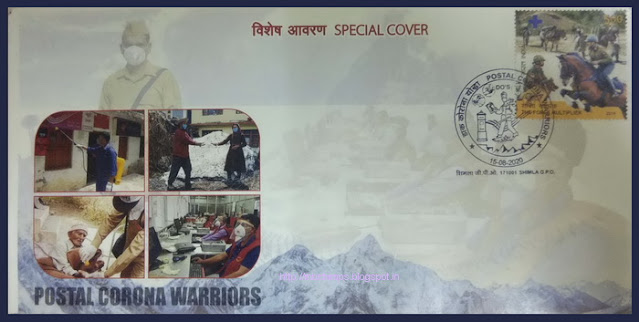 Russia Post released a stamp on 28th May 2020 depicting the Poet Sergei A. Esenin, a lyric scene and a RCC emblem.

A special cover was released in Kalaburgi on 9th October 2019 to celebrate its 61st year of its foundation.

The Hyderabad Karnataka Education Society, established in 1958, is one of the private leading education Society of Karnataka with 50 subsidiary education centers today. The education institute is celebrating its 6th decade of being a guiding light to the Hyderabad Kamataka people. Many subsidiary institutions including Technical, Medical, Dental, Public Hospital, Women and children hospitals under this education institute are strivin, for the betterment of the people of the region.
Cover Code:  KTK/121/2019
Courtesy: Suresh Rao, Bengaluru.
Posted by Mansoor Bolar at 12:19 PM 0 comments

Bureau of Police Research and Development

A special cover was released on 28th August 2020 at New Delhi to celebrate the Golden jubilee of the foundation day of Bureau of Police Research and Development. 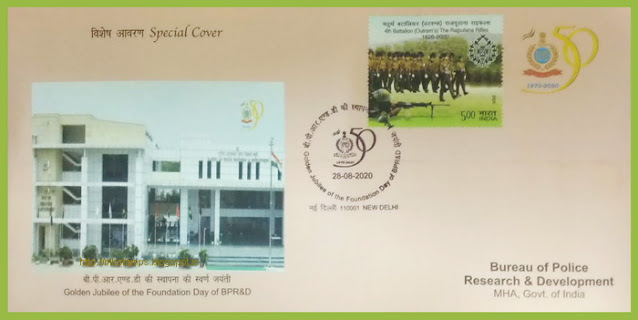 A special cover was released in Bengaluru on 18th September 2020 to celebrate the 70th Birthday of a popular Kannada actor Late Dr.Vishnuvardhan .

A special cover was released on 16th September 2020 to celebrate World Ozone Day at Bengaluru in association with karnataka State Pollution Control Board. 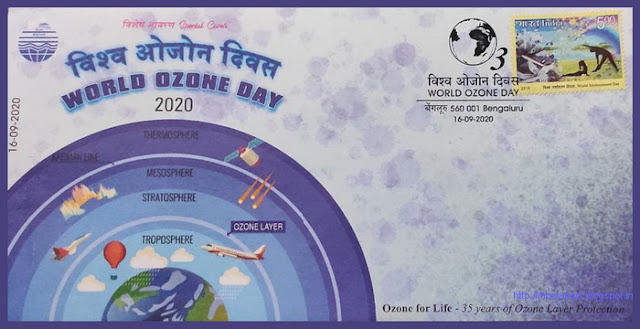 World Ozone Day is observed on 16th September annually. On this day in 1987, the Montreal Protocol(on substances that deplete the Ozone layer) was signed. World Ozone day ( International Day for the Preservation of the Ozone Layer) was proclaimed by the United Nations General Assembly in the year 1994 and this day reminds people about the depletion of Ozone Layer and to find soloutions to preserve it. The theme for 2020 is "Ozone for life - 35 years of Ozone Layer Protection".

A special cover was released to celebrate the International Literacy Day at Bengaluru on 8th September 2020.

Russia Post released a set of 4 stamp on 26th May 2020 on the contemporary Art of Russia to celebrate 75th Anniversary of Victory in the Great Patriotic War. 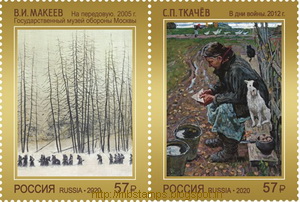 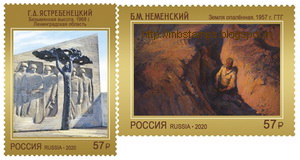 The stamps depict the following paintings:

A special cover was released on 26th May 2020 to create awareness of wearing mask for Covid 19 at Bhubaneswar. 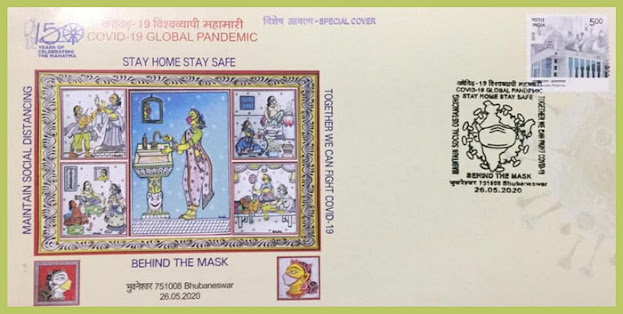 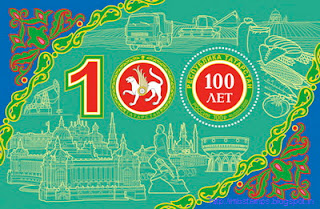 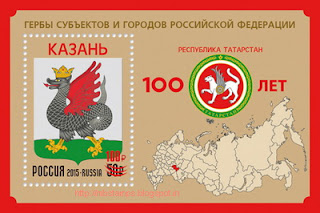 An overprint of an earlier issued was also released on the same date.
Posted by Mansoor Bolar at 5:00 PM 0 comments

A special cover was released on 7th September 2020 at Panaji, Goa on the Convalescent Plasma Therapy. 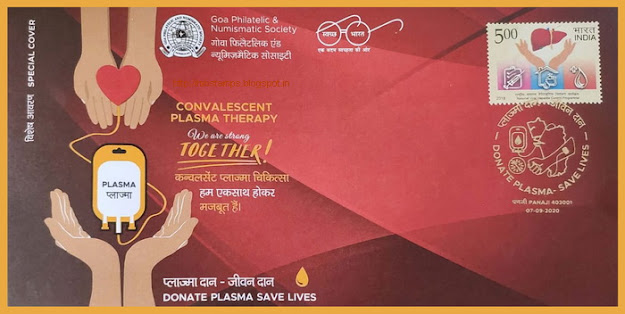 Russia Post issued two definitive stamps on 26th May 2020 of 23 and 54 Rubles with an image of an emblem of the federal postal service organizations of the Russian Federation. 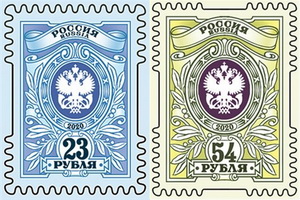 A special cover was released to celebrate the centenary of Non-Cooperation Movement on 5th September 2020 at Allahabad. 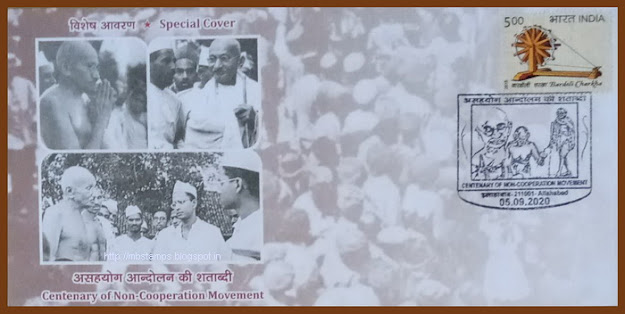 Inviting all Deltiologists or Postcard collectors for your active participation in India's first Online Postcard Exhibition.

DebutPex 2020 is a novel initiative spearheaded by Enthusiastic members of Postcrossing Society of India along with respective State Philatelic societies and India Post. Any person above the age of 10 years, who collects postcards, meghdoot postcards or picture postcards can participate. Participants from across the globe are welcome.

Russia Post released a stamp to celebrate 75th Birth Anniversary of Fyodor F. Ushakov, naval commander and Admiral on 26th May 2020 depicting his portrait, images of the St. Andrew’s colors, St. Paul capital ship, a map of the island of Corfu and surrounding areas. 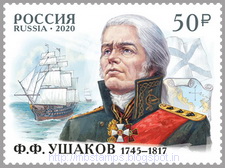 Fyodor F. Ushakov (1745−1817) was a Russian naval commander, admiral, the Black Sea Fleet commander in 1790-1798. F. Ushakov was the first in history to change radically the tactics of a naval battle. His ships got swiftly to close quarters with the enemy fleet and, without wasting time for deployment, attacked the major enemy ship. Fyodor Ushakov participated in 43 naval battles and gained victory in each; he lost not a single ship in the fights, and none of his subordinates was taken prisoner.
Posted by Mansoor Bolar at 10:54 AM 0 comments

A special cover was released in Ambala on 28th August 2020 as part of a Tree Plantation Program.

Australia Post issued a set of 5 stamps on 29th April 2020 to celebrate the 250 years of  British explorer, James Cook embarked on his first Pacific voyage aboard His Majesty's Bark (HMB) Endeavour. 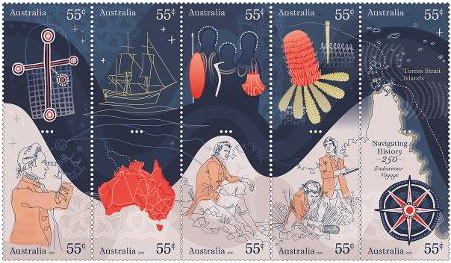 This unusual presentation of the $1.10 stamps sees the denomination halved and placed as design pairs of .55c, .presented as semi-imperforate which is the first such design by Australia Post.

The British Royal Navy’s research vessel HM Bark Endeavour, captained by James Cook, embarked on its Pacific voyage on 26 August 1768 with instructions to chart the transit of Venus across the sun at the equator. Reaching the east coast of Australia in 1770, the Endeavour’s exploration of the Pacific Ocean had a tremendous impact on navigation leading to the first large-scale hydrographic surveys and advancements in the measurement of longitude.
Posted by Mansoor Bolar at 10:30 AM 0 comments