A special cover was released on 22nd October 2016 to mark the celebrations of the 125th Birth Anniversary of Pudukottai Sri Gopalakrishna Bhagavathaswamy, a bhakthi saint who led thousands of common people towards the path of spirituality and dedicated his life to the spread of Namasankeerthanam far and wide across India. 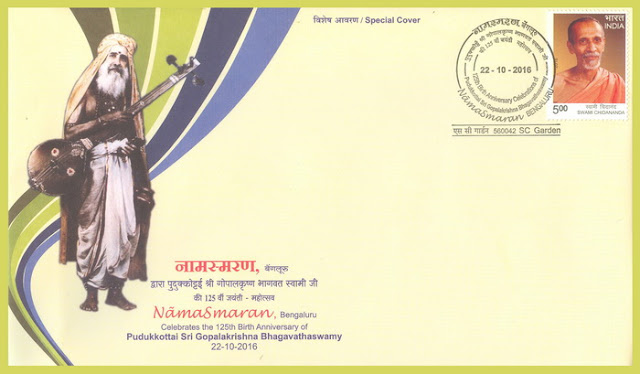 'Namasmaran' has been conducting a series of cultural activities spread over five days in the month of October every year to offer gratitude to Saint Sri.Purandaradaradasa and Pudukkottai Sri Gopalakrishna Bhagavathaswamy.

Wishing you a very Happy Diwali ! 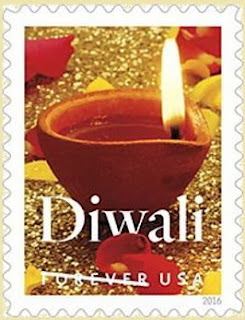 A special stamp on the Petersburg International Economic Forum was released by Russian Post on 16th June 2016. The stamp depicts the logo of the forum with sights of St. Petersburg in the background.

A special cover was released in Ranchi on 28th September 2016 to commemorate India's 500th Test Match.

India won the historic 500th Test against New Zealand at Green Park, Kanpur under the Captaincy of Virat Kohli.

A commemorative stamp on Varanasi city was released in Varanasi on 24th October 2016. 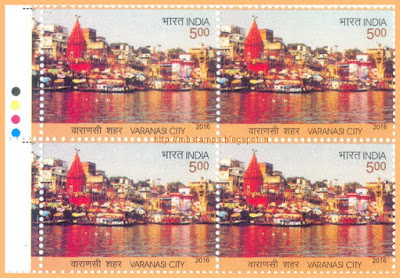 Postal Authority of Spain released a Stamp on Taj Mahal as part of the series "Wonders of the modern world" on 23rd October 2016. 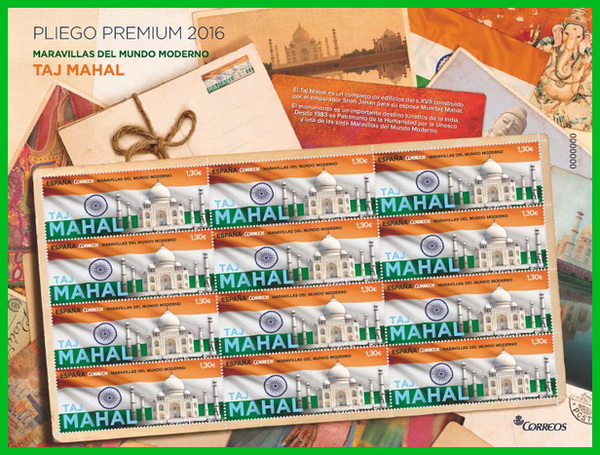 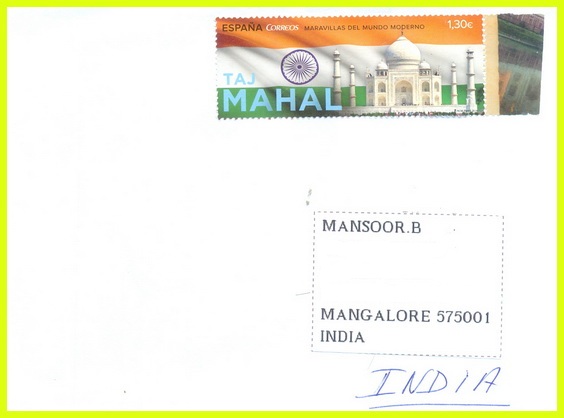 India Post released a set of 4 stamps on Near Threatened Birds in the denomination of Rs.5, Rs.10, Rs.15, and Rs.25 depicting Nicobar Pigeon, Nilgiri Flycatcher, Andaman Woodpecker, and Black & Orange Flycatcher on 17th October 2016. A miniature sheet and 4 sheetlets of 16 stamps each with one mixed sheetlet were released. 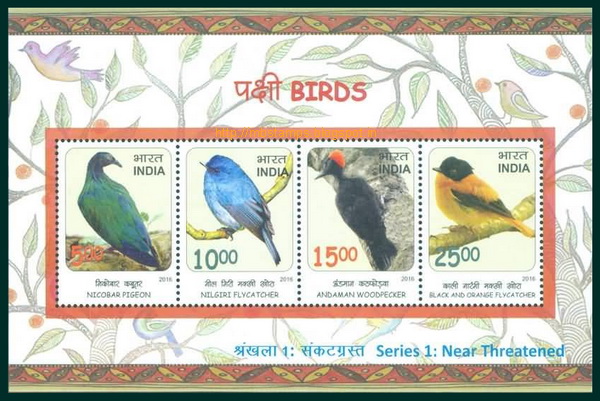 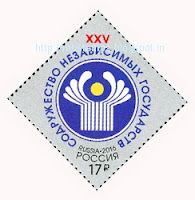 Special on Henna of Sojat released on 6th October 2016. 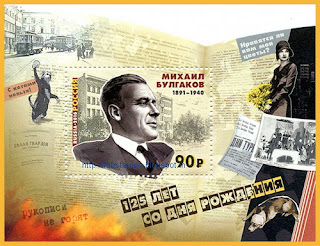 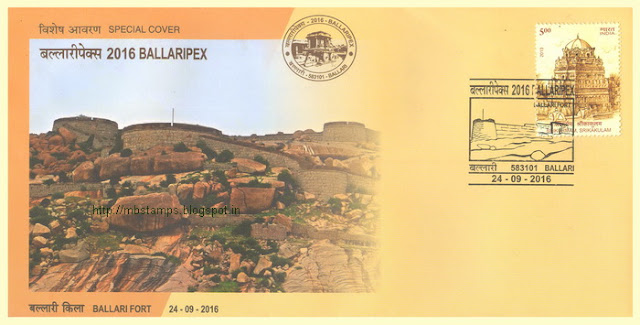 Ballari Fort: Situated in the historic city of Ballari, the fort was built in two parts, namely, the Upper Fort and the Lower Fort. The upper part was built by Hanumappa Nayaka, a feudatory of Vijayanagara Empire while the lower part was built by Hyder Ali, The Sultan of Mysore.
The fort has fine ramparts with several historical and religious monuments. The upper fort has a citadel with several ancient tanks while the lower fort housed the arsenal. 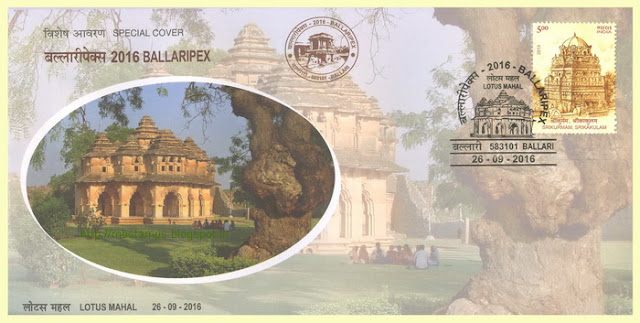 Lotus Mahal, Hampi: This is an exquisite pavilion in the walled area of 'Zenana' (women's quarters). it is believed that the women of the royal family, who lived in the nearby Queen's Palace, disported themselves in the water pavilion within their protected enclosure and met inthe Lotus Palace. The palace is a complex and intricate blend of Indo-Islamic architecture and gets its name from the lotus bud carved on its domed and vaulted ceiling.

Hampi ruins, the former capital of the Vijaynagara Empire are a UNESCO World Heritage Site.

A special cover was released in Kolkata on 22nd August 2016 to celebrate 150 years of Homeopathy. 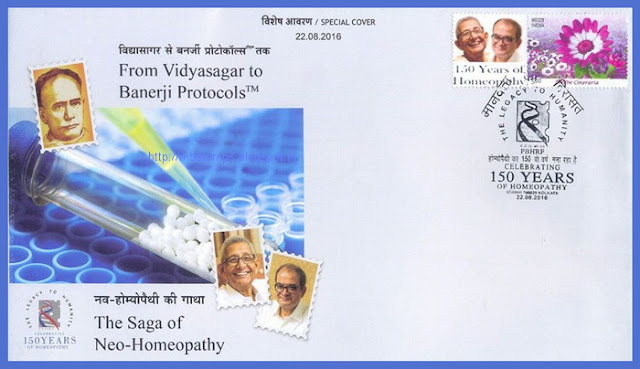 A special cover was released in Chennai on the ocasssion of 377 years of Madras founding on 22nd August 2016.

A special cover was released on 10th August in Chennai to celebrate Rio Olympics.

A special cover was released on 8th August 2016 to comemmorate 86 years of Salt Satyagrah by Gandhiji at Kolkata. 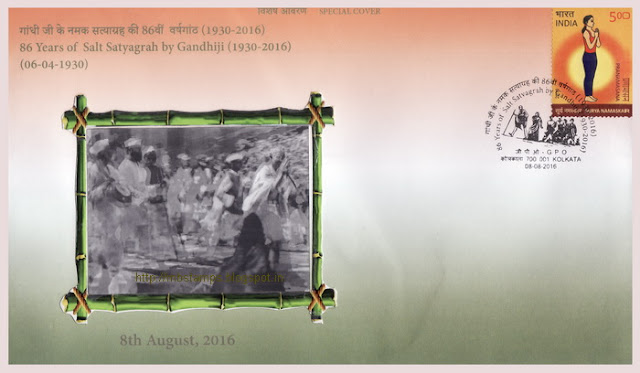 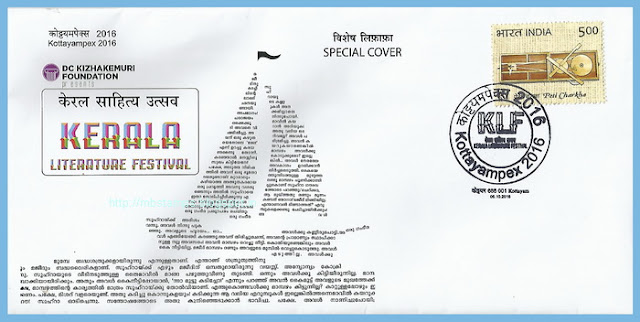 Maldives Post released a stamp on Maharaja Agrasen on 1st October 2016 which is in an odd shape. 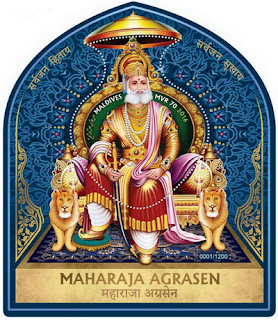 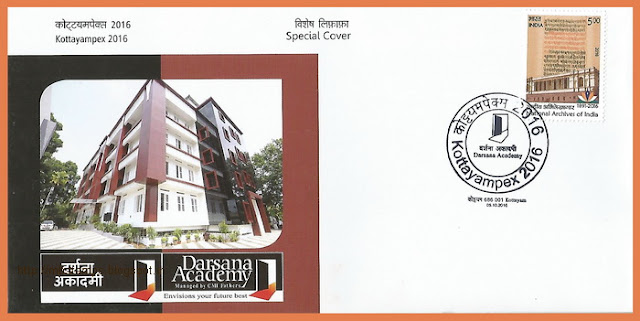 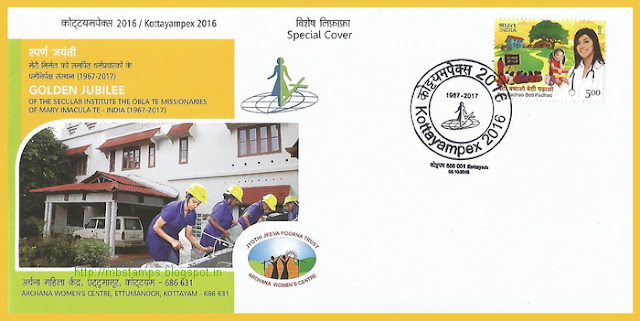 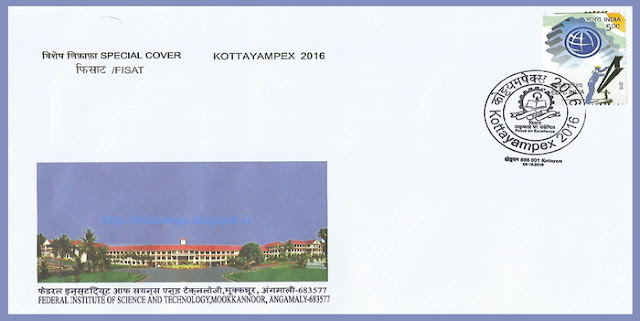 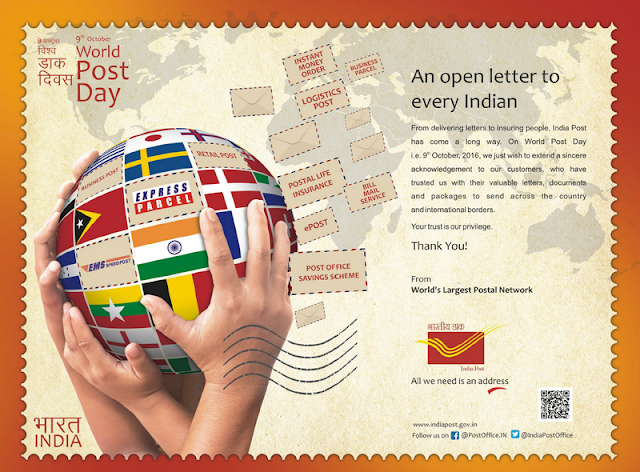 A special stamps was released on 6th October 2016 on the induction of C-130 in to Indian Air Force. 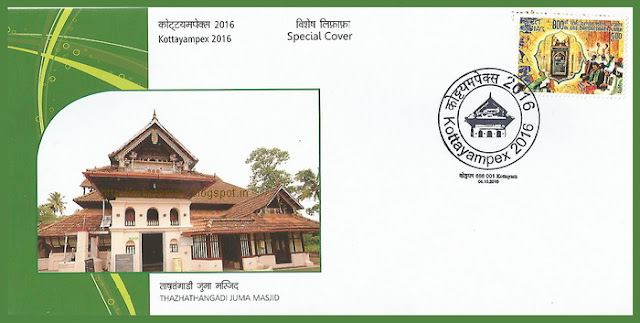 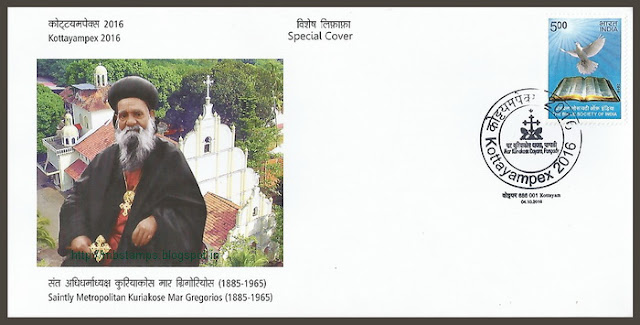 A special cover was released on 8th August 2016 at Kolkata to celebrate 95 years of Gandhiji's visit to Belur Math. 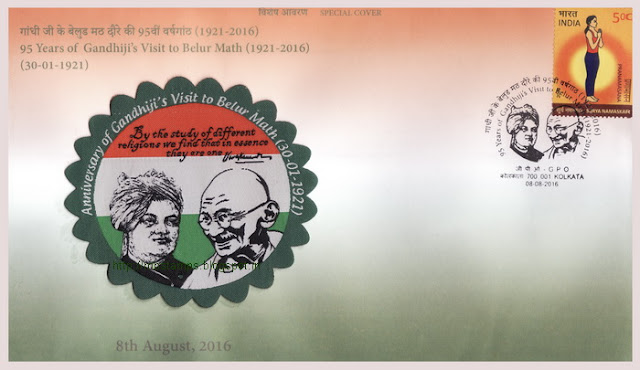 A comemorative stamps on Central Water and Power Research Station was released by India Post on 4th October 2016. 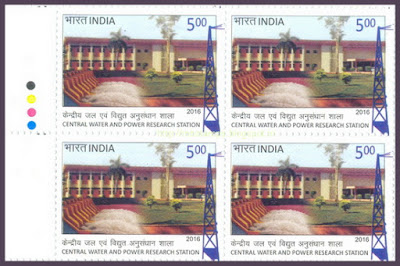 Russia Post released a stamp to celebrate 50 years of the State Institute of Russian Language named after A.S. Pushkin on 6th June 2016. 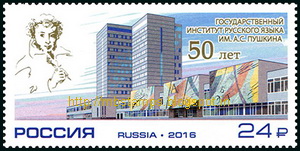 A set of 2 commemorative stamp and a miniature sheet was released on 2nd October 2016. 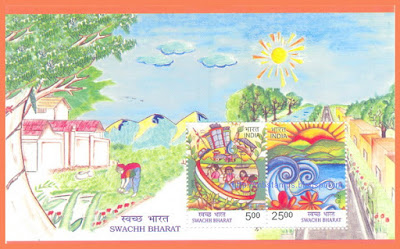 A special cover was released on centenery celebrations of Railway Mixed High School (CBSE) on 3rd August 2016 at Erode. 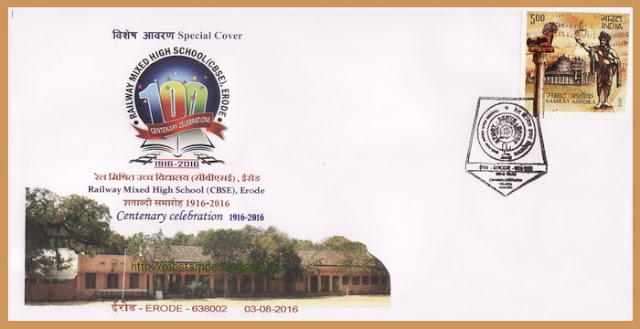 A special cover on Seth Shri Shankardanji Nahata was released on 26th June 2016 at Bikaner.

A special cover was released on Padmashri Dr. B.Sivanthi Adityanar on 24.09.2016 in Chennai on his 80th Birthday Celebrations. 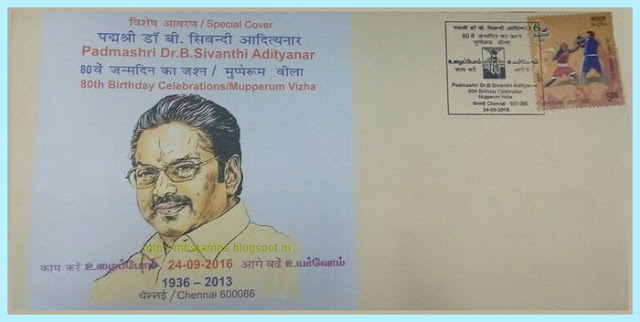 B.Sivanthi Adityanar (1936-2013) was a journalist and Director of "Daily Thanthi" the largest circulated Tamil daily Newspaper. he was conferred with Padmashri award in 2008 in recognition of his distinguished services in the field of Literature and Education and was awarded the degree of Doctor of Letters for his contribution in the field of Journalism, sports and Education.

He held the post of " Sheriff of Madras" for 2 terms, was the President of Indian Olympic Association for consecutive 12 years, was an educationist, Philanthropist, Industrialist and a leading Sports Administrator at National and International level. His memorial Hall is situated at Poes Garden in Chennai.