India Post released a stamp to commemorate 50 years of Govind Ballabh Pant Hospital, Delhi in the service of nation. 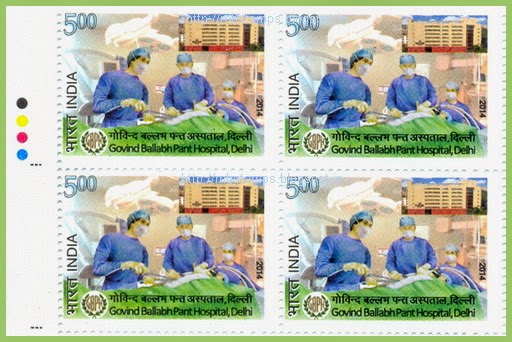 G.B.Pant Hospital, Delhi is a super specialty institute which was built in the memory of the great patriot freedom fighter and statesman, Govind Ballabh Pant. It was inaugurated by the first Prime Minister of  India Pt. Jawaharlal Nehru on 30th April, 1964. 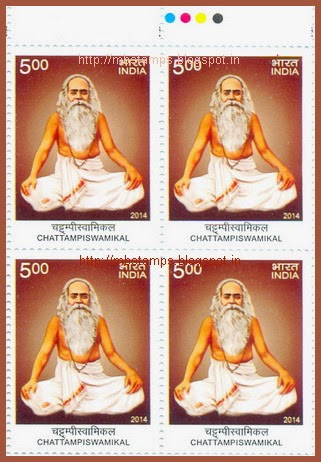 70 years of the liberation of Russia.

Russia Post issued a souvenir sheet on 18th April 2014 depicting the picture of civilians greeting the soldiers of the Red Army to commemorate 70 years of the liberation of Russia.

Suchitra Film Society & Karnataka Chalanachitra Academy invitation to all the philatelists and friends  to attend the function on occasion of Actor Sri. Shivaram's contribution to Kannada Cinema.   There will be an photo exhibition on Actor Sri Shivaram and a mini Philatelic exhibition on Indian Cinema  on 26th & 27th April organized by Suchitra film society Banashankari 2nd stage Bangalore.

National Council of Churches in India.

India Post released a stamp to commemorate National Council of Churches in India on 25th April 2014. 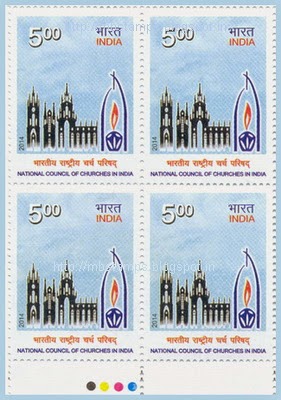 Ships and Explorers stamps from the Tristan da Cunha.

The new set of four stamps from the Tristan da Cunha Post Office released on 9th April 2014 depicts Arctic and Antarctic Explorers and Personalities who have journeyed in Tristan waters. Each stamp depicts an image of one of these seafarers together with the ship most closely associated with them and Tristan da Cunha. 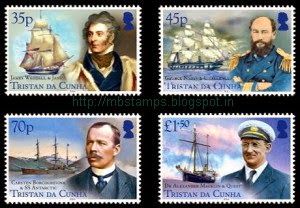 Russian Post released a stamp on 28th March 2014 to commemorate 100th birth anniversary of M.L. Gallay, Soviet Test Pilot. He was also a writer and has published about 30 scientific papers. He taught at the Moscow Aviation Institute and Moscow State Technical University of Civil Aviation .

The stamp features a portrait of ML Gallay and in the background strategic bomber M -3 development OKB. V. Myasishcheva , for whom Mark  was awarded the title Hero of the Soviet Union .

Malta Post released a set of four stamps on 18th March 2014 commemorating 35 years from the End of Military Facilities Agreement and the 200th anniversary of the Malta Police Force depicting police boats and navy vessels. 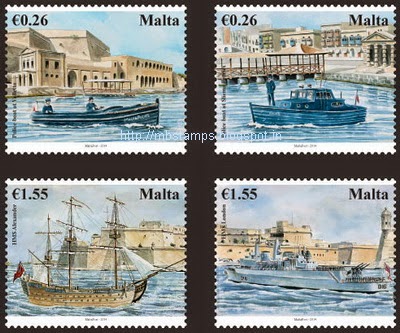 Karpov puts his stamp on Olympics and chess.

Chess Grandmaster Anatoly Karpov was at UPU headquarters on Monday 7 April 2014 to inaugurate a philatelic exhibition on sport and the Olympic movement featuring items from his personal and world-class collection. 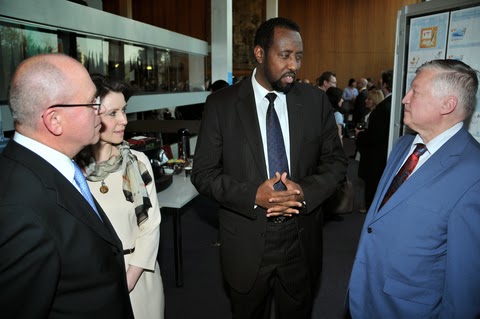 Russia's ambassador to Switzerland, Alexander Golovin (left) inaugurated the exhibition with the UPU's Bishar A. Hussein and Anatoly Karpov (right).

Chess Grandmaster Anatoly Karpov was at UPU headquarters on Monday 7 April 2014 to inaugurate a philatelic exhibition on sport and the Olympic movement featuring items from his personal and world-class collection.

Karpov is well known for his mastery of chess, having won several world championships, but he is also an avid collector of stamps and philatelic items on the Olympics, chess and Belgium, among other themes.

Karpov, now a member in the Russian Parliament and the founder of 36 chess schools around the world, owns one of the most important philatelic collections on the modern Olympic Games, especially ranging from the first Games in Athens in 1896 to those held in Amsterdam in 1928. Taken as a whole, his Olympic collection is believed to be one of the top three in the world. “I have almost everything, but it is impossible to have everything,” he said with a smile.

At the UPU, Karpov is exhibiting stamps, miniature sheets, marked envelopes, postcards and special postmarks from every Winter Games from the first in 1924 in Chamonix to those held in Calgary in 1988.

The Russian Post is also showcasing stamps from the latest Winter Olympic Games in Sochi, while Swiss Post and the Post of Liechtenstein brought stamps they issued on the Olympic theme over the years.

The stamps are on display this week during the annual session of the UPU's Postal Operations Council.

The philatelic items from Karpov’s Olympic collection fit in more than 100 albums at home, he said, and he estimates its worth at some 1.5 million euros.

Among the rare and precious items he owns is a block of four mint stamps from the first modern Olympic Games, issued by Greece. Only three such blocks exist in the world, he said. Former International Olympic Committee head Antonio Samaranch owned one, too. He also has proofs of the first Olympic stamps issued by Greece, which are extremely rare.

Karpov is also an avid collector of stamps on chess, and he is displaying several in the exhibition. It features the very first chess stamp in the world, issued by Bulgaria in 1947 for the Balkan Games, as well as stamps marking World Chess Championships, including those in which he participated in 1978 and 1981.

Russian Post issued a set of 4 stamps on 14th March 2014 on the wild flowers of Russia. 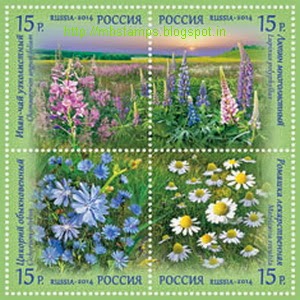 Fireweed angustifolia - a perennial herb species of the genus willow-herb family kipreyny. It grows throughout the Northern Hemisphere. On the territory of Russia is most often found in the band of coniferous forests of Siberia and the European part. Seeds remain viable for several years.

Chicory - kind of perennial herbaceous plants of the genus chicory family Asteraceae. Chicory is very prevalent as a weed. It is easily recognized by its inflorescences-baskets that consist only of reed blue flowers. But these baskets are only disclosed in the early morning hours and in cloudy weather. In Russia distributed in the European part, Caucasus, Siberia.

Chamomile - annual herb species of the genus daisy family Asteraceae (Compositae). The plant is widespread in Eurasia and North America, is found in almost all extratropical regions of both hemispheres. Chamomile is used in antiquity science and medicine, is still one of the most popular medicinal plants.

The North by the Sea - Icebreakers of Sweden. 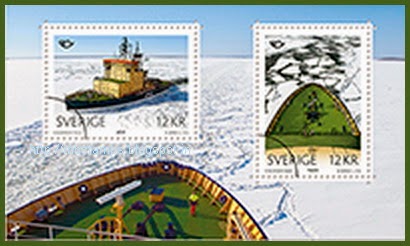 The stamps depict the Swedish Maritime Administration’s icebreakers, Atle and Ymer. Atle was built at the Wärtsilä shipyard in Finland and was delivered in 1974. Ymer was delivered in 1977 from the same shipyard. They are sister vessels, with similar perfor- mance and measurements.Atle is shown in its entirety, while the stamp with Ymer shows the vessel in close contact with the ice. 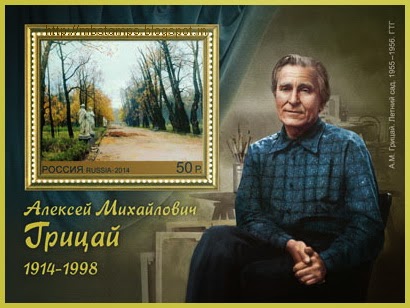 In his works he continued the tradition of Russian lyrical landscape late 19th to the early 20th Century, painted epic and lyrical images of Russian nature. The artist also worked on portraits and works on an industrial theme. The stamp depicts his painting " Summer Garden " (1955-1956 ) and with his photo.

With a coastline like in Norway, it is only more than natural that, as far back in time as Norwegians can remember, people along the coast found ways to travel by sea.Viking ships took both westward and eastward, and as ships developed into fishing vessels shipbuilding became a cornerstone of Norwegian coastal industry. 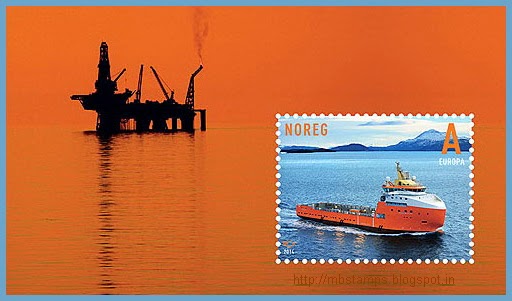 The platforms were being built, but they were not going to manage on their own out at sea. The supply boats, support vessels that were loyal supporters in all types of weather, were developed by the shipbuilding industry along the Norwegian coast. These vessels are called PSV, platform supply vessels. They transport necessary goods and supplies and carry out many different types of assignments at sea. Their cargo includes provisions and reserve parts, but they also carry out many tasks that require a high level of technological competence from the crew.

Aker Yards Langsten is part of Aker Yards Group, an international group of shipbuilders that focuses on complex and advanced vessels. Since its start in 1945 in Tomrafjorden, not far from Alesund, it has built ferries, passenger boats and seismic vessels that you will find in many places around the world. Over a period of 70 years, Langsten AS has grown into the largest shipbuilder of its type in Europe and the fifth largest in the world. 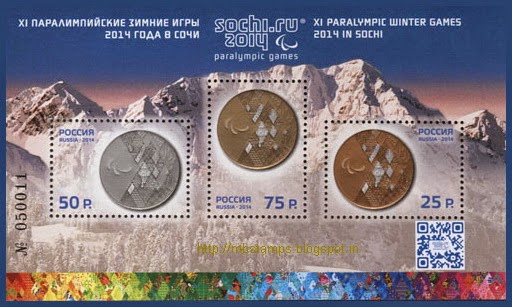 XI Paralympic Winter Games was held for the first time in Russia in Sochi from 7 to 16 March 2014. Games mascots were chosen Ray of Light and Snowflake. 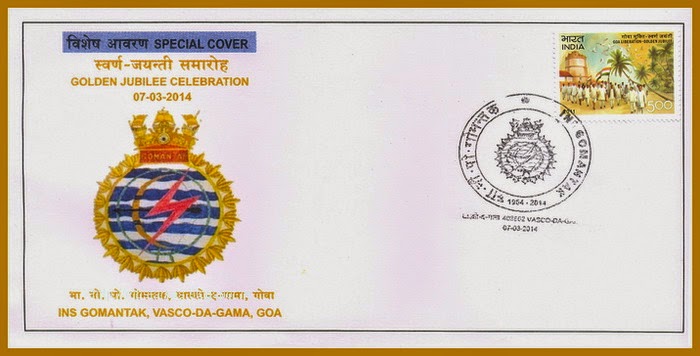