Italian post has issued a stamp on 23rd May 2013 celebrating the 50th International Submariner Association Congress in Catania. 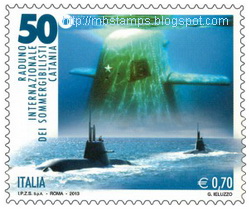 The stamp depicts two submarines sailing on the surface, and at the top, the detail of a conning tower.

The 50th anniversary of establishment of diplomatic relations between Russia and Algeria.

Diplomatic relations have been established between USSR and Algeria on March 1962, 1962 when Algeria has proclaimed its independence, stopped being a French colony.The Declaration on Strategic partnership in the fields of culture, science, education, sport, tourism and archives has been signed between the countries, the agreement on creation of the Joint intergovernmental Russia-Algeria commission on trade and economic, science and research cooperation and so on has been concluded.


The stamp depicts symbolically a globe against the background of flags of Russian and Algeria.

Securities and Exchange Board of India 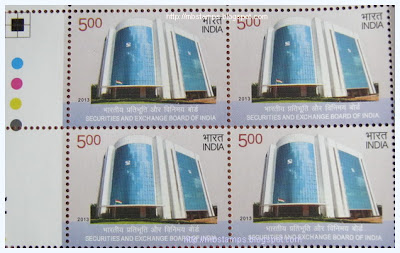 India Post released a stamp on Securities and Exchange Board of India (SEBI) on 24th May 2013. SEBI is the regulator for the securities market in India. It was established on 12th April 1992 through the SEBI Act 1992 .  SEBI has its headquarters in Mumbai, which is depicted in the stamp.

50th Anniversary of the Icebreaker Tarmo

Estonian Post released a stamp on the occasion of 50th Anniversary of the Icebreaker Tarmo on 25th April 2013. 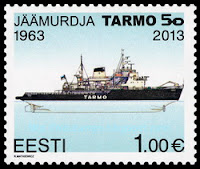 The icebreaker Tarmo was built at the Wärtsilä shipyard in Helsinki in 1963. The Republic of Estonia bought the ship in 1993 and she has now successfully operated under the Estonian flag for 20 years, ensuring safe entry for ships to ports and to sea lanes.

The 150th anniversary of the Obuhov Steel works

Russia Post released a stamp on 26th March 2013 to celebrate 150th anniversary of the Obuhov Steel works. The stamp depicts with the S-300 anti-aircraft missile and in the background the Obukhov steel works panorama of 1912. 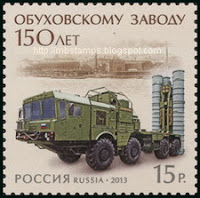 The Obuhov Steel works was founded in 1863 as a steel mill, his main task was the production of ordnance weapons of military boats and fortresses.

He was an outstanding statesman and public figure, Minister of Gas Industry of the USSR the first head of state gas company "Gazprom" and Prime Minister of Russia.VS Chernomyrdin was awarded the Order "For Services to the Fatherland I, II, III and IV".

The stamp features a portrait of VS Chernomyrdin, the sign and the star of the Order "For Services to the Fatherland I degree".

Wild Ass of Kutch and Ladakh

India Post released a set of 2 stamp and Miniature Sheet on the Wild Ass of Kutch and Ladakh on 10th May 2013. The Stamps depict the Kiang ( Ladakh) and Ghor Khar ( Kutch) Ass in the face value of Rs.5/- and Rs.20/- 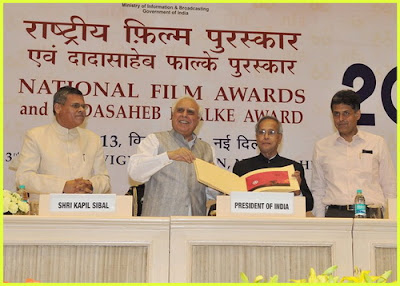 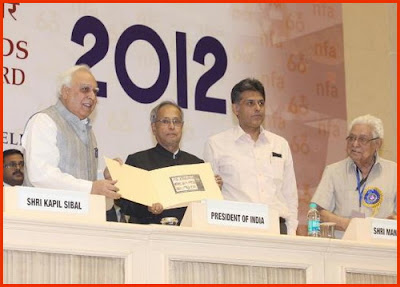 Notification For Commemorative Postage Stamps on 100 Years of Indian Cinema


Department of Posts is issuing six Miniature Sheets depicting 50iconic personalities of Indian Cinema to commemorate the century long journey of this medium of mass entertainment. This issue will be released by Hon’ble President of India on 3rd May 2013 at Vigyan Bhawan, New Delhi. However, it will be made available for sale to all Philatelic Bureau  in the month of June 2013.

The details of above issue are as follows:-

i. Six Miniature Sheets with a print order of 8.1 Lakhs each are beingissued. First two Miniature Sheets consist of nine stamps eachand depict some Dadasaheb Phalke awardees. The other fourwith eight stamps each depict personalities from various fields of cinema.

ii. The denomination of each Stamp is Rs. 5. Single stamp sheets are not being issued/ printed.

iii. Sufficient numbers of First Day Covers and Information Brochures will be available for sale with the stamps at the Philatelic Bureaux.

iv. First Day of Cancellation will be available for six months from the date of release as a special case.

The date from which these stamps will be available for sale at thePhilatelic Bureaux shall be intimated on India Post website in due course. Patrons are requested to kindly bear with this delay. 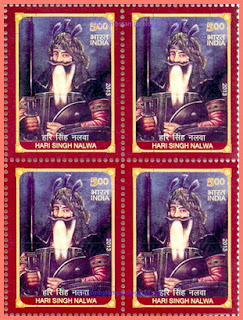