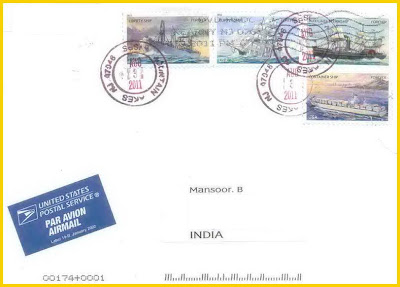 The U.S. Postal Service released a set of 4 stamps on 28th July 2011 to honor the U.S. Merchant Marine featuring vessels that have played an important role in US history: clipper ships, auxiliary steamships, Liberty ships, and container ships. 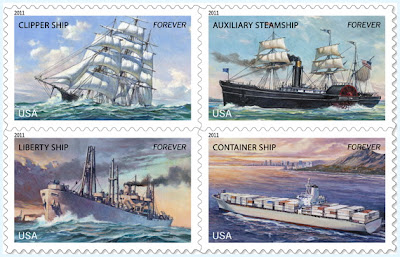 The Clipper Ship stamp is based on an undated lithograph of the famous clipper Sovereign of the Seas, which launched in 1852. Clipper ships, ushered in by the California Gold Rush of 1849 and noted for their streamlined shape and majestic cloud of square-rigged sails, set numerous speed records for their time.

The Auxiliary Steamship stamp is based on contemporary lithographs of ships of the Collins Line, which provided service between New York and Liverpool in the 1850s. Auxiliary steamships—steam-powered ships with back-up sailing rigs—were the ocean liners of their day, competing in the 1850s with clipper and other sailing ships for transatlantic mail and passenger service.

The Liberty Ship stamp is based on a photograph of an unidentified Liberty ship in the files of the Westport Public Library in Connecticut. During World War II, the United States built more than 2,700 Liberty ships, plain but sturdy cargo vessels that sustained the Allied forces with a steady supply of food and war material.

The Container Ship stamp is based on an undated photograph of the R.J. Pfeiffer, a modern container ship launched in 1992 and operated by Matson Navigation Company. Container ships, pioneered in the 1950s, are the lifeblood of today's global economy, carrying nearly all the world's manufactured goods across the oceans and exemplifying the modern merchant marine.

Source : U.S.Postal Service, Thanks to Kasinath.
Posted by Mansoor Bolar at 10:56 AM 0 comments 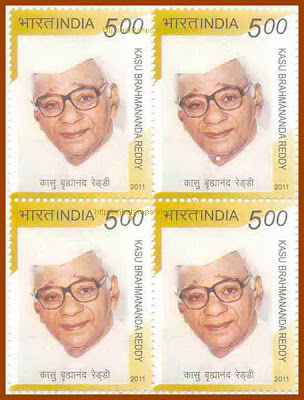 He was a politician who became the Chief Minister of Andhra Pradesh, who initiated many central projects and public sector industries like bridges, Ports, steel Plants etc. He was also active in welfare activities like providing jobs to the youth, building houses for the poor and education. Later he was also appointed as the Governor of Maharashtra.
Posted by Mansoor Bolar at 10:56 AM 0 comments 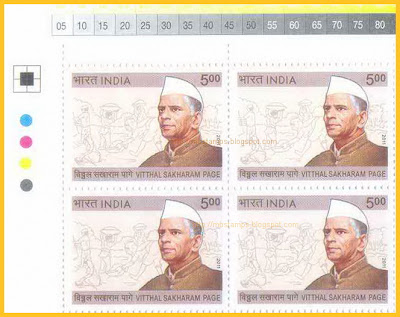 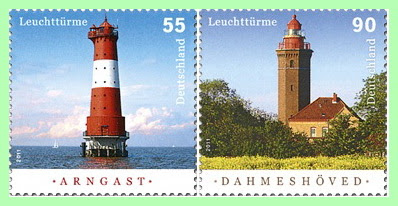 On 7th July 2011 German Post issued a set of 2 stamps on the lighthouse of Arngast and Dahmeshöved. Arngast was commissioned in 1910 and is in continuous operation.Dahmeshöved was built in the year 1879 and put into operation in 1880.
Posted by Mansoor Bolar at 2:37 PM 0 comments

For decades Finland has been one of the world’s leading countries for building icebreakers and developing ice breaking technology. 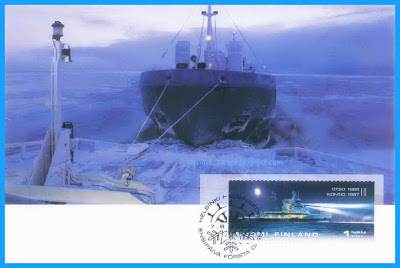 The OTSO (15.000 Kw), built in 1986-87, is a representative of a new generation in design. It performs more economically than the older icebreakers.

New postage stamps have been launched for the new Republic of South Sudan. 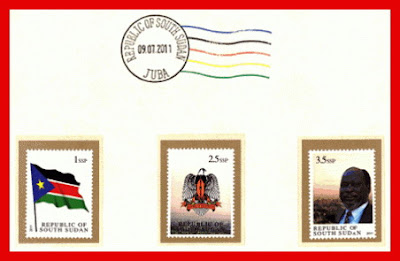 The stamps depicts Flag, Emblem and the Sudanese Leader John Garang.
According to Brigadier General (Rtd) Elijah Biar Kuol, the Director General for Administration and Finance in the Ministry of  Telecommunications and Postal Services, 100,000 copies of the stamps have already been distributed to all the states of South Sudan. Also the new currency, which are in denominations of one, five, 10, 25, 50 and 100 will be effective as of 18 July.
Posted by Mansoor Bolar at 4:04 PM 2 comments

The National Philatelic Museum was inaugurated by Radhika Doraiswamy, secretary Department of Posts on 11th July 2011. Speaking on the occasion she said that the museum will provide enhanced and interactive platform for promoting philately and will stimulate interest for stamp collection among children. 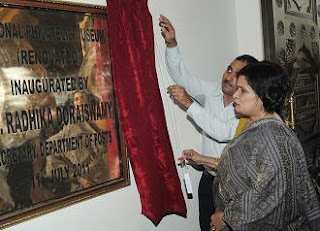 The museum will be open Mondays to Fridays — it will also be open on Saturdays for school groups on request. It will have an entry fee but the amount has yet not been decided. ‘There will be a nominal entry fee,’ said Doraiswamy.

The museum has bays dedicated to Mahatma Gandhi and the prime ministers of India, along with freedom fighters. It also has stamps on several themes such as science and technology, transport and wildlife.There are stamps from abroad, and displays from the Army Postal Service and India Security Press, Nashik.

The museum also has an amphitheater for talk shows and presentations along with a reference library. In the artists corner, the department has showcased the actual designing of a stamp and also plans to invite artists from time to time to give live demonstrations.
Posted by Mansoor Bolar at 3:25 PM 1 comments

On 12th July 2011, Jersey Post issued a set of stamps and other philatelic material on Ships and Sailing vessels which met disaster in the sea surrounding dangerous waters of the Channel Island. 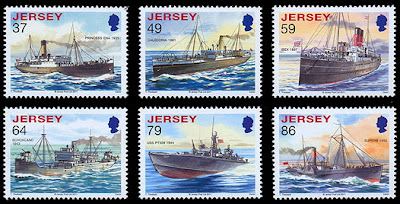 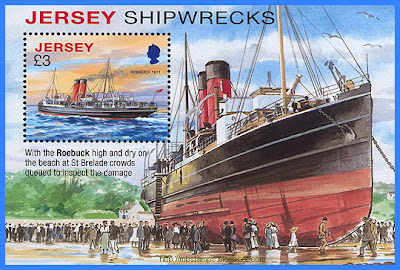 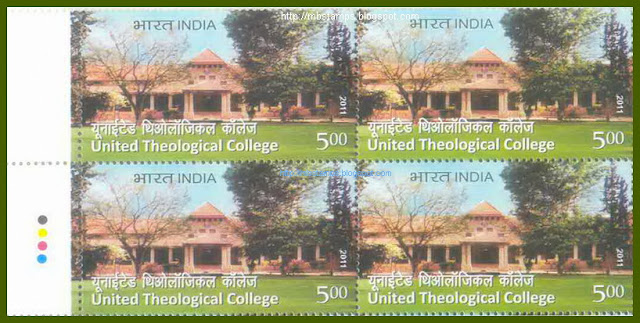 It was founded on 8th July 1910 to train leaders for the church and society in India.It has produced leaders who have served society over the last one hundred years.The UTC encourages community members to live as best citizens with commitment to justice and nation building.
Posted by Mansoor Bolar at 10:48 AM 0 comments

The New Rules include some points which I think may be a ray of hope to Indian Stamp Collectors. 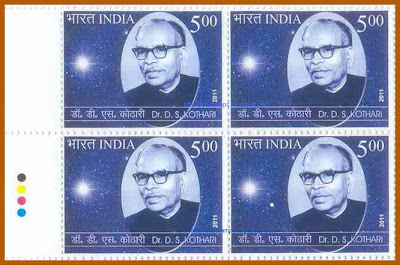 Dr.D.S.Kothari,an eminent Indian scientist was born in Udaipur in Rajasthan on 6th July 1906.He did his MSc in Wireless (Electronics) and later obtained PhD under the supervision of Ernst Rutherford at the Cavendish Laboratory, Cambridge.He brought about a lot of changes in the Physics Department when he was in Delhi University as the Reader and Head of Physics Department.He was scientific advisor to Ministry of defence from 1948 to 1961.

He has won several honours and awards for his contribution in the field of Science and Education. He received the Padma Bhusan in 1962 and the Padma Vibhushan in 1973. 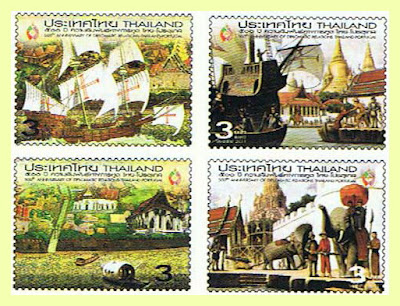 A joint issue will be issued by Thailand and Portugal on 20.07.2011 to mark five Centuries of the Opening of the Window to the World at Large.In the reign of King Ramathibodi II of the Ayutthaya Period, Portugal was the first Western nation to come into contact with Thailand. There were trade transactions and co-operation in many areas. So, the relationships between Thailand and Portugal dates back almost five centuries to when the two countries established diplomatic ties on February 10th, 1859 by the signing of a trade and navigation agreement. In 1981, Thailand opened its first embassy in Lisbon whereas Portugal established its consular office in Bangkok in 1818.
Thanks to Kasinath.
Posted by Mansoor Bolar at 4:46 AM 0 comments

The Order of St. Andrew. 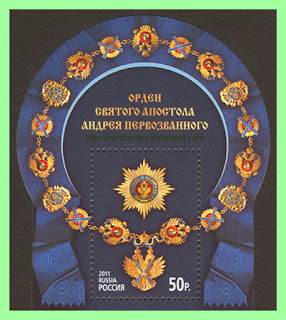 On 1 July, 2011 Russia issued a Souvenir Sheet which depicts the badge of the Order of St. Andrew on the Order's chain, star and ribbon of the Order.
Posted by Mansoor Bolar at 4:09 PM 0 comments