Island issued a Souvenir Sheet on 22nd March 2012. The present stamp commemorates the rescue operations of March 9th 2004 when TF Líf, the Coast Guard helicopter, rescued sixteen crew members of the fishing vessel Baldvin Thorsteinsson EA 10. The vessel went ashore in the South of Iceland after it’s capelin net fastened in the propeller. Rescue units from ICE-SAR assisted on land. The stamp design is based on an award-winning photo by news correspondent Jonas Erlendsson. 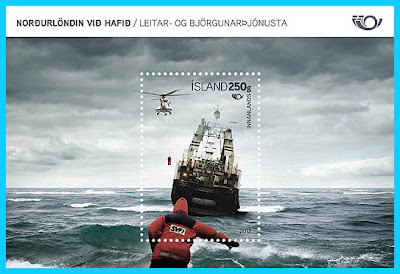 For centuries, Icelandic fishermen have lived with the dangers of the sea. Many lives have been lost in the struggle with the forces of nature. The Icelandic Coast Guard and Landsbjörg, the Icelandic Association for Search and Rescue (ICE-SAR), cooperate closely in rescue operations when perils threaten at sea or on land. The professionalism of the Icelandic rescue teams have attracted worldwide attention. The Coast Guard plays a key role in rescue at sea with its powerful helicopters, ships and planes.
Source: Island Post
Posted by Mansoor Bolar at 4:17 PM 0 comments 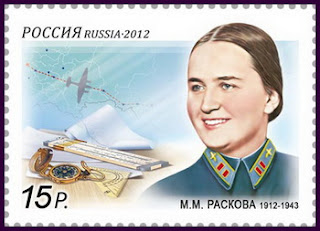 On 21st March 2012, Russia released a stamp on M.M.Raskovoy (1912-1943) which depicts a portrait of M. Raskovoyi against flying route, the compass, slide rule and protractor navigation.
Posted by Mansoor Bolar at 5:16 PM 0 comments

To celebrate the Centenary year of the Titanic Canada Post will Issue stamps and Souvenir sheet on 5th April 2012. 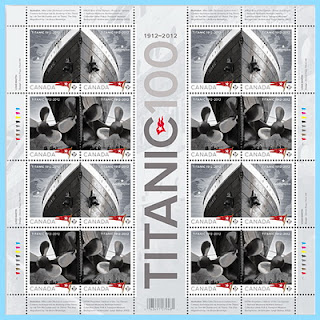 Each corner block contains 2 stamps showing RMS Titanic's bow (front) and 2 featuring the stern (rear). The detailed illustrations were based on existing photographs and are intended to be as realistic as possible.

The Bow: Titanic's enormous bow and two front anchors appear in the centre of the first pair of stamps.When you're ready to mail, the pair separates into a right and left stamp.

On the right side, you'll see Southampton (England), where the Titanic began her maiden voyage.

On the left is Halifax (Nova Scotia, Canada), which became the centre of recovery efforts after the ship sank.

The Stern: The second stamp pair shows the 3 propellers that were situated at the rear of the ship—2 larger outer propellers and a smaller centre propeller. Again, the stamp pair separates into 2 for mailing.

At the bottom of each stamp sits the House Flag of the White Star Line (Titanic's owners). This iconic red flag flew from Titanic's main mast and was also displayed on her tickets, cutlery and furniture. 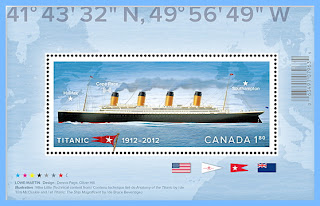 For Canada Post, the release of Titanic stamp series is a chance to honour the people of Halifax, who rose to take on the grim duty of recovering the victims. It is a chance to remember an iconic moment in history and help keep the memory alive for a new generation of Canadians.
Source: Canada Post.
Posted by Mansoor Bolar at 12:04 PM 0 comments

India Post released a set of 4 stamp and a miniature sheet on 14th March 2012 to celebrate 100 years of Civil Aviation in India.

Civil Aviation started in India when the French Pilot Monseigneur Piguet undertook the first commercial flight covering a distance of about 10 kms from Allahabad to Naini on February 18, 1911 for carrying mail. The Indian Civil Aviation industry has come a long way since then and has completed a successful journey of 100 years.
The first domestic air route between Karachi and Delhi was opened in December 1912 by Indian state Air Services in collaboration with UK based Imperial Airways. The aviation industry gathered momentum, in 1932 when J.R.D. Tata founded Tata Airlines which later became Air India.
The design of the stamps and the miniature sheet depicts the journey of the Civil Aviation in India, starting from the first commercial flight to its ubiquitous presence across the country with airports having world class facilities.
Posted by Mansoor Bolar at 10:08 AM 0 comments

State awards of the Russian Federation.

Russia released a set of 3 stamps of State awards depicting "Golden Star" "Order of Saint George" and  "For Merit" on 2nd March 2012. 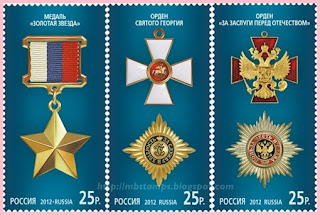 The medal "Order of Saint George" – is the highest military award of the Russian Federation. It rewards the senior officers for the conduct of military operations which resulted in the complete defeat of the enemy.

India Post released a stamp on Shyama Charan Shukla on 9th March 2012. He was the former Chief Minister of Madhya Pradesh and a freedom fighter. 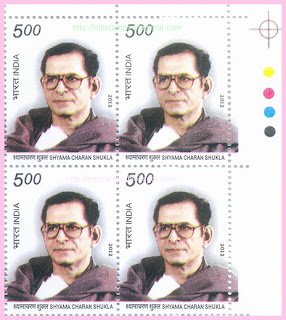 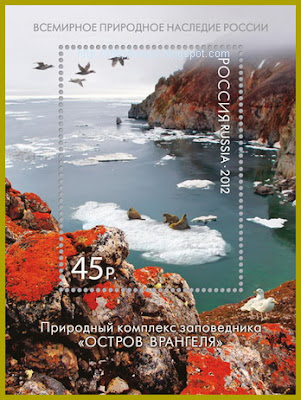 Wrangel Island (7.6 sq. km.) Is located about 500 km north of the Arctic Circle, at the junction of Western and Eastern hemispheres, it is separated from the mainland by Long Strait. In 1960 the island was established reserve which included the territory of the island and Herald (11 sq. km.), Which is located 70 km east. Since 2004, the reserve is included in the List of World Natural Heritage Site by UNESCO.
Posted by Mansoor Bolar at 2:15 PM 0 comments

India Post released a stamp on Vasantdada Patil on 1st March 2012. He was the former Chief Minister of Maharashtra and a freedom fighter. 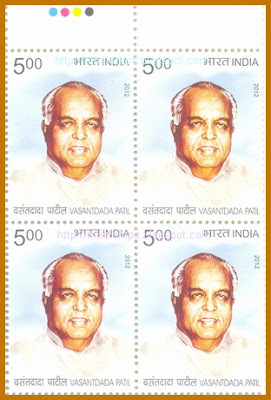 To mark the 78th  anniversary of the film,‘Sati Sulochana’Karnataka Chalanachitra Academy had organised an exhibition on “World Stamps on Cinema” on March 3, at Chitra Kala Parishad, Kumara Krupa Road, Bangalore. 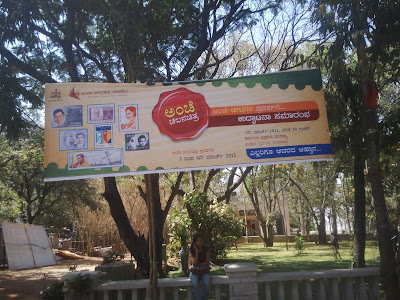 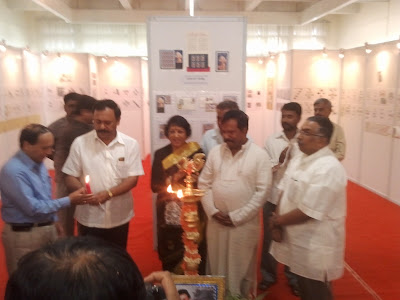 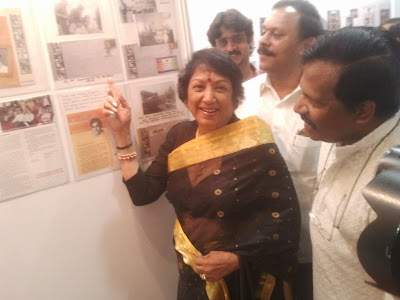 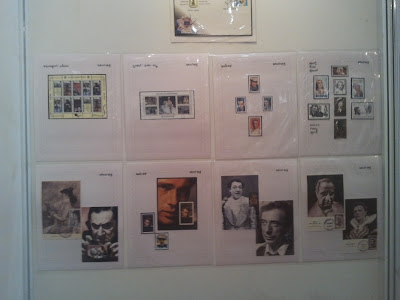 On 27th February 2012, Russia released a Souvenir Sheet on Mascots of XI Paralympic Games in Sochi  - Ray and Snowflake. 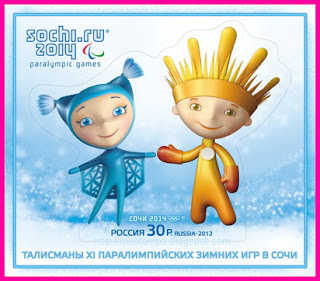 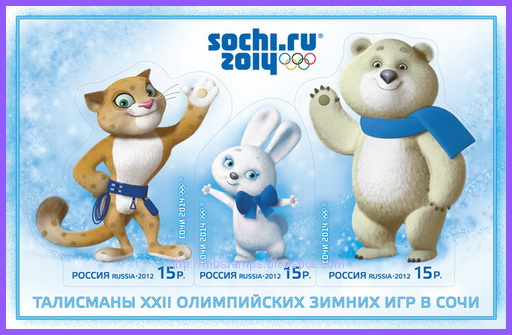 First in the history of the Games, mascots of the Olympic movement have been selected in the All-Russian competition, culminating in a live show "mascot Sochi 2014 final "on Channel One. The first three winners were: leopard (received 28% of the vote), the polar bear (18%), rabbit (16%).
Posted by Mansoor Bolar at 11:58 AM 0 comments

Stamp Collection Manager is a professional application designed for people who have a hobby of collecting stamps. Easily catalog your stamp collection by storing detailed information about each stamp with images. You can also take print outs of your collection, and even export to HTML, PDF or CSV format. 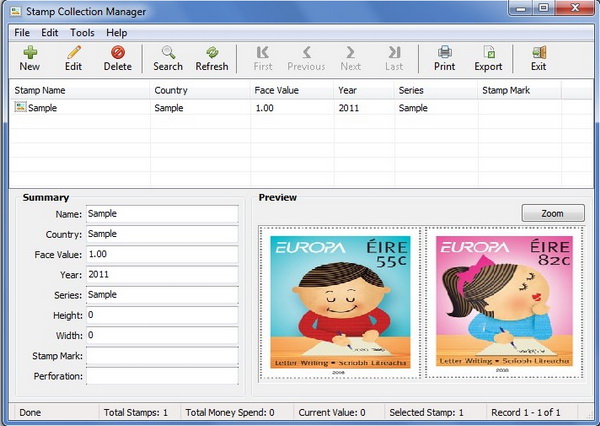 India Post issued a stamp to commemorate the 60th anniversary of the Employees State Insurance Corporation on 24th February 2012. 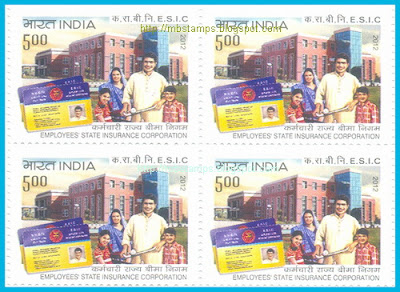 Employees State Insurance Scheme of India, popularly known as the ESI Scheme, is a multidimensional social security system tailored to provide socio-economic protection to the worker population and their dependents covered under the scheme. ESI Corporation has its Headquarters in Delhi.
Posted by Mansoor Bolar at 4:00 PM 0 comments

To mark the 78 anniversary of the film,‘Sati Sulochana’Karnataka Chalanachitra Academy has organised an exhibition on “World Stamps on Cinema” on March 3, which is an important day in the 78-year-old history of Kannada films. Sati Sulochana, the first Kannada talkie film, was released on that day at Paramount Cinema (now Parimala) near City Market. Sati Sulochana released in 1934 was also the first film to be screened in the erstwhile Mysore Kingdom.

Over 1,000 stamps representing important personalities and events in world cinema will be displayed on the occasion.Philatelist Jagannath Prakash with the help of M.R. Prabhakar is presenting this philatelic picture of celluloid media.Mr. Prakash described the event as a“philatelic journey into the history of world cinema.” Speaking to The Hindu, Mr. Prakash said that the exhibition would have hundreds of stamps representing stalwarts of world cinema.“It is sad that we have only one stamp representing Kannada film industry. Obviously the credit goes to Dada Saheb Phalke award recipient actor Dr. Rajkumar, he says. Surprisingly, the first-ever Kannada talkie Sati Sulochana itself has not made it to the philately fraternity, despite its historic importance.