A special cover was released to celebrate World Social Work Day on 17th March 2015 at Chandigarh. 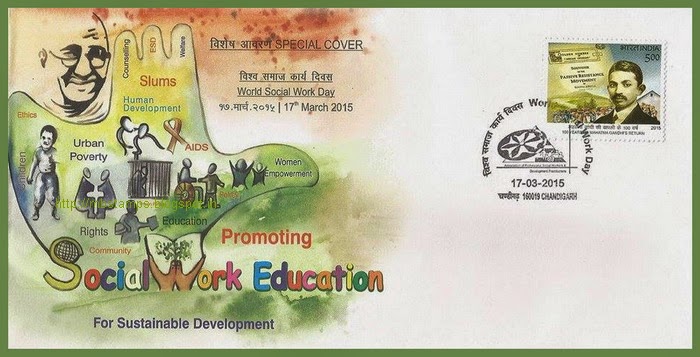 A set of 3 stamp featuring Nakhimov Order, Order of Courage  and Order of Friendship was released by Russia Post on 19th February 2015. The state awards of the Russian Federation is the highest form of encouraging citizens for services to the state. 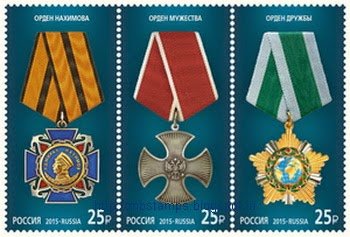 A set of 23 post cards was released recently by Karnataka postal circle on the Wooden Carvings at Karanji Mansion Postal training centre, Mysuru.The set is priced at Rs.100/- 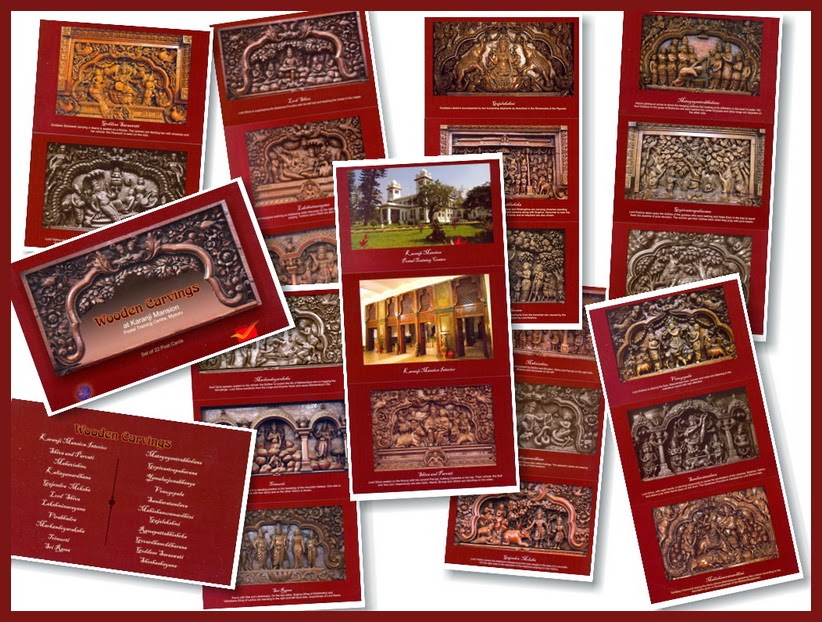 Karanji Mansion:  The royal family of Mysore Maharajas constructed “Karanji Mansion" in the year 1902. After Independence it was purchased by the Postal Department in 1964.Postal Training Centre is functioning in this building since 1965.

The building commands a vast setting and a view of Karanji Lake. The elevation is remarkable for highly ornate features and painstakingly executed embellishments - a variety of cusped arches and sun-shades, stone-hewn balconies, each resting on a lotus base, intricately carved stone columns, brackets and parapet merlons. A rich mix of Saracenic and Hindu elements, each somewhat overdone but all of them combining to produce a balanced and quaintly pleasing elevation. A Section of the Mansion show subtly varying stylistic features. The wing on the left is predominantly Rajasthani, with its lotus-based and curvilinear-chhajjaed balconies, while the entrance-porch block has dominant shades of the Saracenic - the slender- pillared twin arches, domicals and the Moorish lancet-windows. "Karanji Mansion" building has completed 100 years of it construction in the year 2014

Posted by Mansoor Bolar at 9:20 AM 0 comments

On the occasion of Grand Celebration of 10th anniversary of re-establishment of Shri Ahichhatra Tirth, a special cover and special cancellation has been released by India Post on 23rd April 2015 at Ramnagar Kila (U.P.). 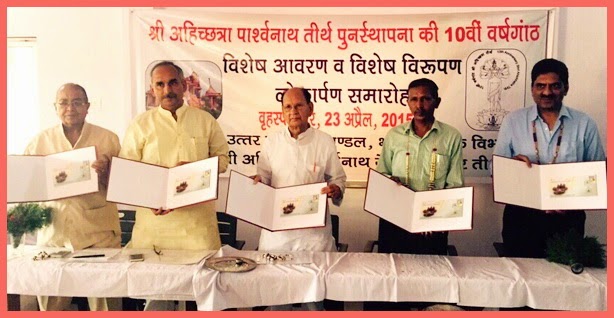 From the earliest days of European exploration, sailing ships were crucial in the development of Australia. Sailing ships carried everything that settlers needed for survival. The journey was often long and dangerous, ranging between six and 13 weeks, depending on weather conditions. Other hazards were fire and the difficulties of maintaining hygiene.

Clipper ships were known as the greyhounds of the sea from their beginnings in the 1840s and represented the pinnacle of sailing ship technology. By the 1850s, the use of clipper ships on the England to Australia route was prominent, with most setting sail for Melbourne. These sleek sailing ships represented major advancements in design, enabling them to reach destinations more quickly. 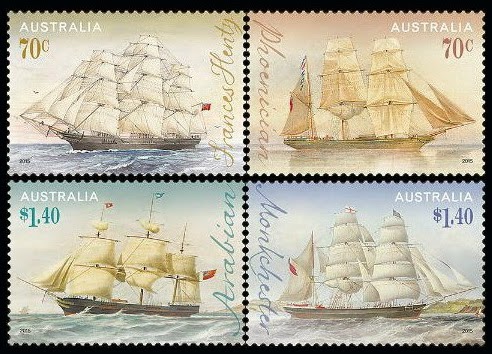 Frances Henty – was constructed in Aberdeen, Scotland in 1852 and named after the wife of Thomas Henty. The vessel carried passengers, gold and wool between London and Victoria until at least 1869. The stamp is based on a painting by EC Moore, titled The Frances Henty, 1854.

Phoenician – was the first clipper ship to come to Australia, arriving in Port Jackson on 21 July 1849 - taking 91 days from England. The stamp design is based on a painting by Frederick Garling, titled Clipper barque Phoenician, 1850s.

Arabian – was one of many clipper ships that sailed in Australian waters. The stamp design is based on the 1840s lithograph by John Raphael Isaac, after a painting by CP Williams.

Monk chester – was a clipper barque built in 1865 by Messrs. Peverill for Messrs. A. Strong of North Shields, England. The stamp design is based on the 1865 painting by John Scott, a noted English oil painter from Newcastle.

Posted by Mansoor Bolar at 9:40 AM 0 comments 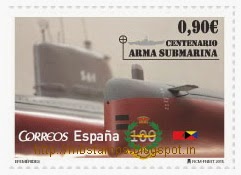 A stamp depicting submarines S61 (Class Dolphin) and S71 (Class Galerna) was released by Spain on 20th February 2015 comemmorating the centenary of Under water Weapon Act of 1915.

A commemorative stamp was released by President Shri Pranab Mukherjee at a function held at Rashtrapati Bhavan on the occasion of 200th year of the founding of Old Seminary, Kottayam, Kerala on 21st April 2015. 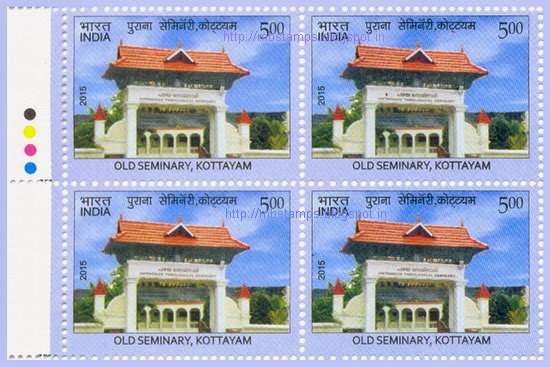 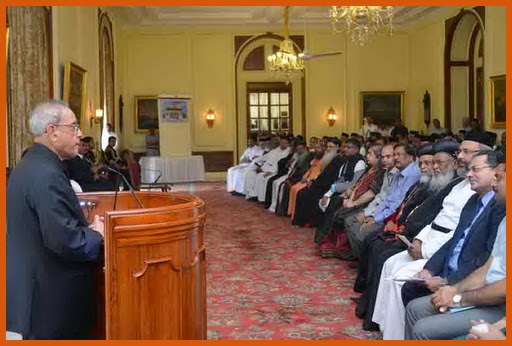 A special cover was released to celebrate the golden jubilee of  Sri Venkateshwara Balakuteer at Guntur on  18th March 2015. 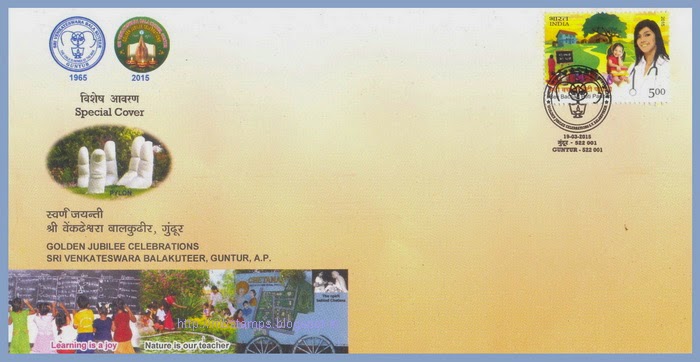 A stamp was released to commemorate the the centenary celebration of Patna High Court on 18th April 2015 at Patna.

A special Cover with Special Cancellation on 100 Years Of Gandhi’s First visit to Madras was released on 17th April 2015 at a function held at Chennai GPO by PMG. 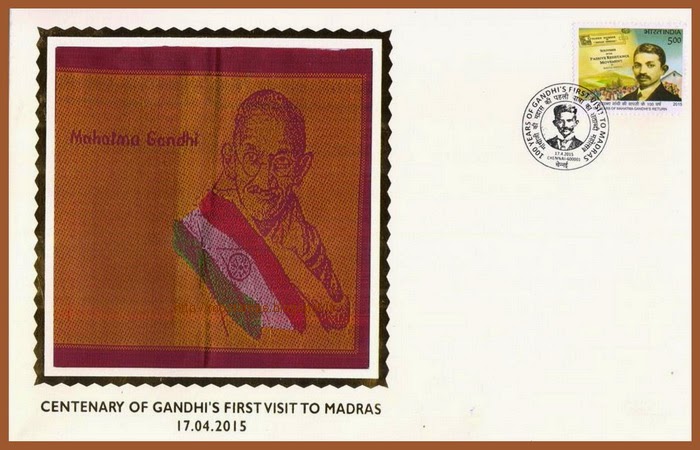 The Image of Gandhiji has been woven on Kancheepuram Silk which has relevance to Madras.  The Cover comes with a folder giving  details of the programme of Gandhi during his fortnight long visit.

A commemorative stamp was released by Russia Post on 12th February 2015 on S. P. Kapitsa, a famour Russian Scientist and Physicist. 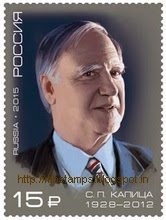 A special cover was released on 27th March 2015 at Ranchi Stamp Fest 2015 in Ranchi with the message of Cleanliness if Godliness.

A souvenir sheet was released by Russia Post under the theme "World Natural Heritage of Russia" featuring the Natural Park, Lena Pillars on 10th February 2015. In the year "Lena Pillars" was included in the UNESCO World Heritage List. 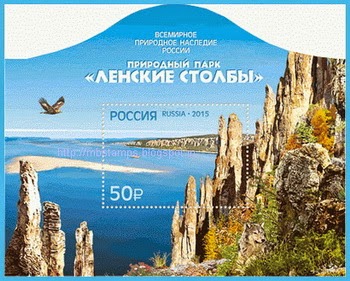 Natural Park "Lena Pillars" is located along the shore of the Lena River in the central part of the Republic of Sakha (Yakutia), is an extraordinarily beautiful range of vertical cliffs, which reach heights of 150 m, and about 500 million years old. Pillars formed on the territory of the Siberian platform under the influence of the huge differences in annual temperatures and water penetration, separated by steep ravines and deep river valleys.

A special cover was released to honour Dr. Dietrich Brandis on the occasion of 150 years of  Forestry in India on 21st March 2015. 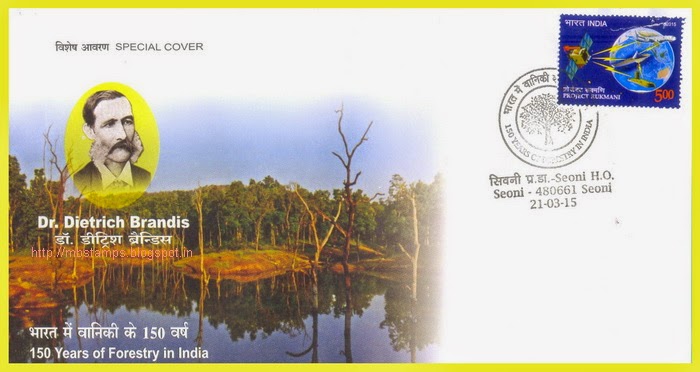 A special cover was released on the occasion Rotary District Conference, Mumbai on 31st January 2015.

A special cover was released on 28th March 2015 on the occasion of the Annual Conference of Bangalore Orthopaedic Society, Bangalore. 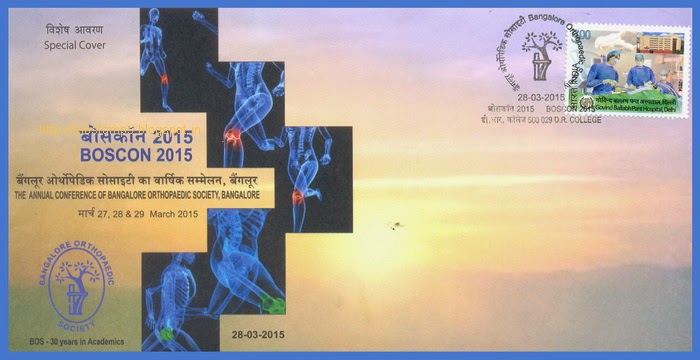 The Bangalore Orthopaedic Society is a professional association for Orthopaedic and Trauma Surgeons of Bangalore. Apart from academics, its traditional focus is on research and on promotion of the highest clinical and ethical studies.

La Poste and India Post  issued a set of two stamps on 10th April 2015 depicting the two satellites Megha-Tropiques and SARAL under the theme of "India-France: 50 years of space cooperation". The set of two stamp and miniature sheet which has been  incorporated with QR code for the first time in India, will be unveiled on the occasion of Indian Prime Minister Narenda Modi’s  visit to France. 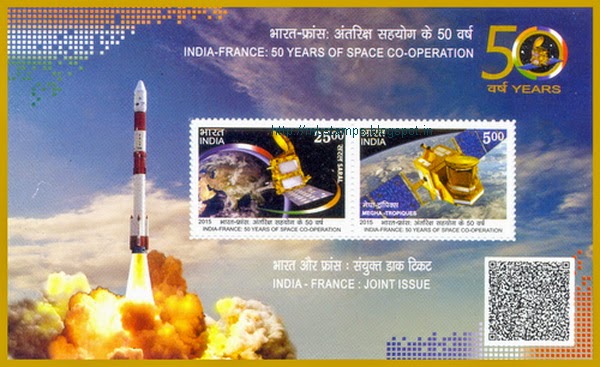 India and France heralded a new era of bilateral cooperation with the establishment of formal diplomatic relations in 1947.Space cooperation between the two countries has now turned 50, making it India's oldest and most important collaboration with an European nation. Since the 1990's CNES (Centre National d’Etudes Spatiales) and ISRO (Indian Space Research Organization) have been collaborating together and the collective efforts have resulted in the launch of space missions - Megha-Tropiques in 2011 and SARAL in 2013.

A special cover was released to celebrate 60 years of Netarhat Vidyalaya at Ranchi on 26th March 2013.

A special cover was released on Audumbaram Tree on 16th March 2015 at Warangal. 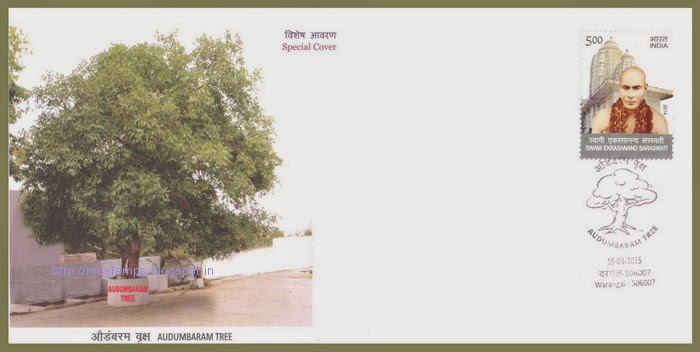 A special cover was released by Dr. K.V.Rao Scientific Society on 21st March 2015 as tribute to the great Scientist.

A special cover was released on the occasion of 100 years of Urs celebrations of Muhammed Anwarullah Farooqui Fazilat Jung on 20th March 2015 at Hyderabad. 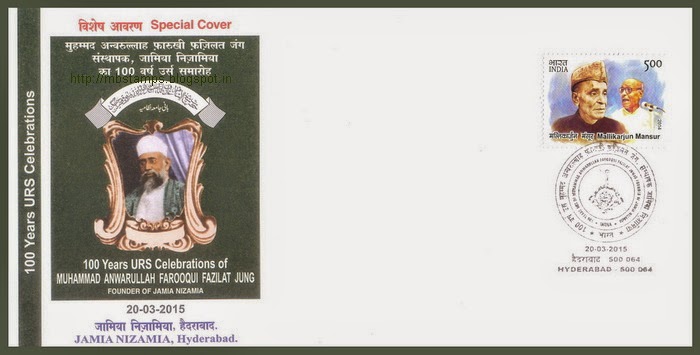 A special cover was released with a message to save birds by Dainik Bhaskar (newspaper group) as part of their "Save Birds" campaign on 18th March 2015 at Bhopal. 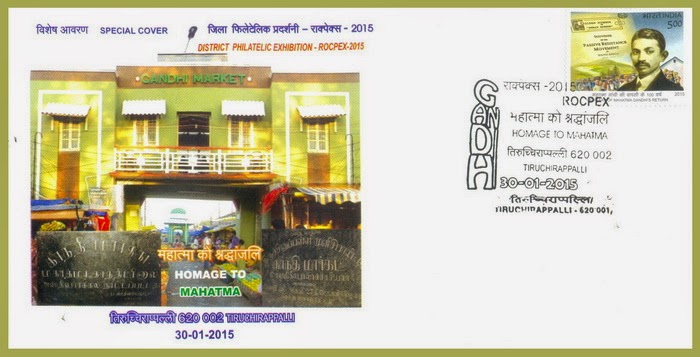 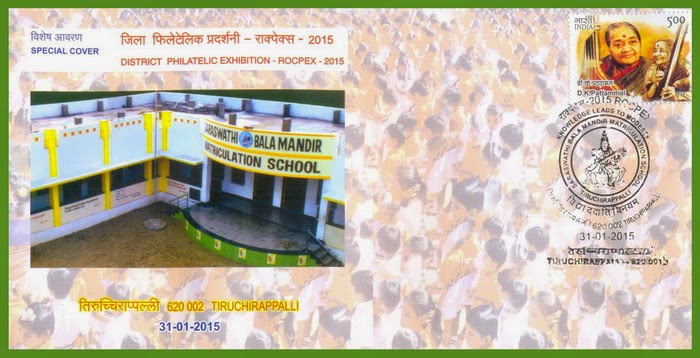 Note: There were total 3 covers at Rocpex - 2015, I have already published one of the cover earlier. Click here 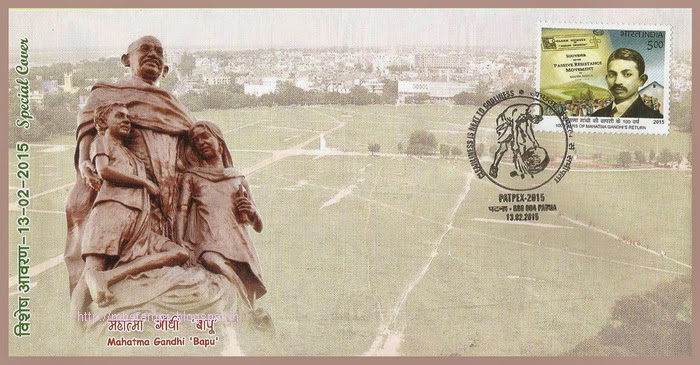 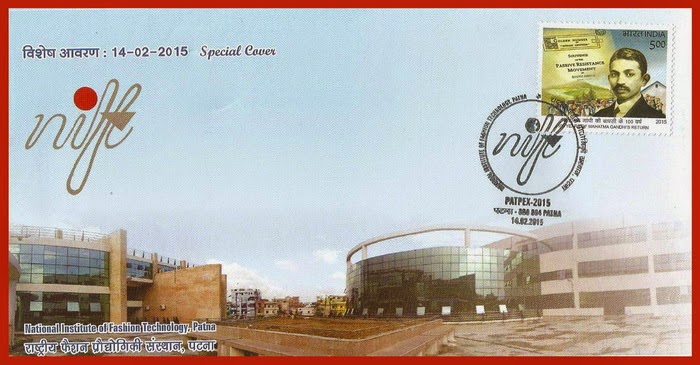 A special cover was released on 6th February 2015 on Vinobha Bhave University, Hazaribagh.

Russian Post released a stamp on the Postcrossing project on 27th January 2015. 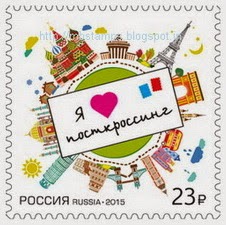 Postcrossing - an International project, whose goal is communication between people from different countries, regardless of their location, age, gender and nationality, through postcards sent through the public postal service. Currently, Postcrossing has members from almost all countries, except few countries in the World.
Visit Postcrossing webiste.

A Special commemorative cover on "Golden Chariot - an unforgettable journey with myriad experiences" was released on 2nd April 2015 at Meghdoot Auditorium , Bengaluru GPO. This special commemorative cover depicting the Golden Chariot has been brought out by Karnataka Postal Circle in coordination with the Department of Tourism, Govt., of Karnataka. 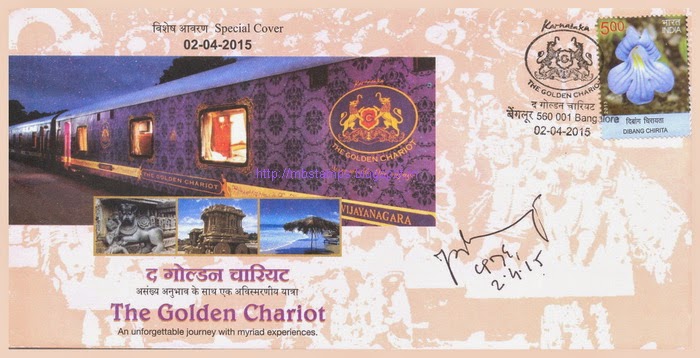 Karnataka, Tamil Nadu, Pondicherry, Kerala, Goa. "Many Worlds One Voyage", The Golden Chariot, South India's first and only luxury train experienc brings to you, a timeless journey that's worth of royality. that's worthy of you. A journey to a rarer facet of India. A journey like no other, one that's the prevlige of a chosen few. a itinerary tha't designed to delight, to fascinate, to cast a spell. traversing kingdom after kingdom, your journey becomes a epic of absolute luxury. 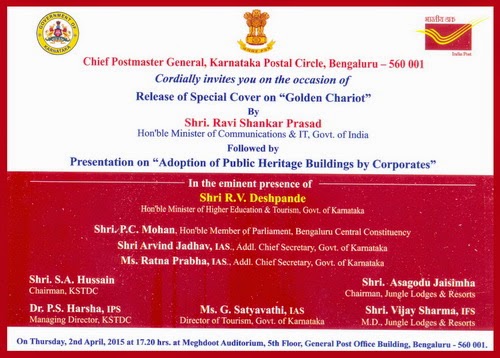 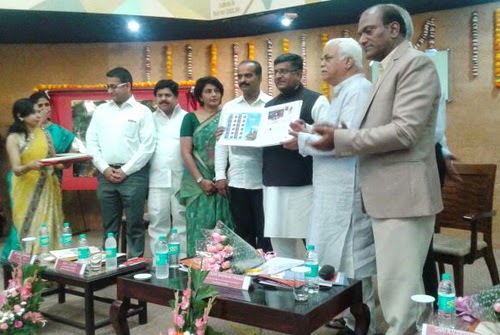 A special cover was release on 7th February 2015 on District Rural Development Society at Hazaribagh.

On the occasion of Golden Jubilee celebration of Engineers India Limited (EIL) a commemorative stamp was released by the Hon’ble Prime Minister of India Shri Narendra Modi during the Urja Sangam- 2015 organized by Ministry of Petroleum and Natural Gas at Vigyan Bhawan, New Delhi on 27th March 2015. 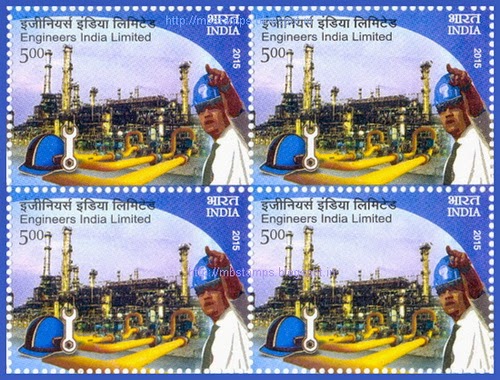 Engineers India Limited (EIL) is a public-sector undertaking of the Government of India under the Ministry of Petroleum and Natural Gas. It was set up in 1965 to provide engineering and related consultancy and technical services principally focused on the oil and gas and petrochemical industries. In it's 50 years of existence, EIL has contributed immensely to the cause of nation building.