Russia Post released a Joint stamp Issue of the RCC Member Countries featuring  National crafts - Bast on 24th January 2017. The stamp depicts the straw shoes on the wooden fence and the emblem of the RCC.

Straw shoes are one of the most important symbols of the traditional national way of life of Russian peasants. It is low footwear that was actively used in rural areas up to 1930s. They were made of wooden bast (linden, elm and others), birch bark or hemp. The soil was braided in twig, bast, rope or leather. The straw shoes were affixed to the leg with long strings, leather povoroz or obor, which intersected several times at the ankle, thus fixing the onucha. Such footwear was cheap, affordable, light and hygienic.

A special cover to mark the 80th Anniversary of Gandhiji's Last visit to Travancore was released  on 26th May 2017 during APEX 2017 held at Thiruvananthapuram. 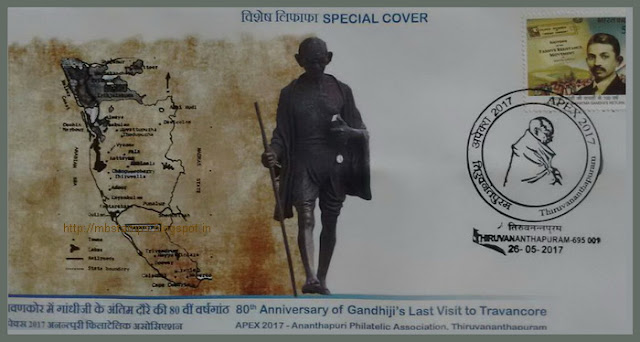 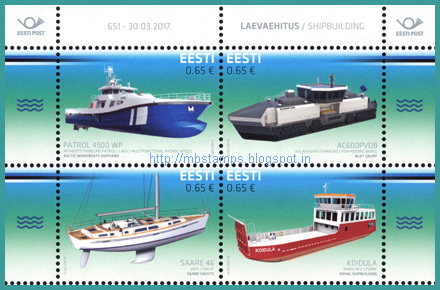 Shipbuilding is an industry that deals with the production and repair of watercrafts in shipyards. The biggest Estonian company in the field is BLRT Group followed by many companies that mainly build small ships - Baltic Workboats, Saare Yachts and Reval Shipbuilding. PATROL 4500 WP is a 45 meter multifunctional wave-piercing Patrol vessel. AC600PVDB is a fish feeding barge with an increased seaworthiness and a deep V-shaped hull. SAARE 46 is a luxurious and fast yacht with a length of 46 feet. KOIDULA is a unique ship that is designed for very shallow waters - the draught in full load is only 1.0 m with a maximum load of 40 t.

Russia Post released a stamp on 16th January 2017 to celebrate 100th birth anniversary of Yevgeny Zababakhin (1917–1984), a nuclear physicist depicting himself against a chart from his book Some Issues of Gas Dynamics of an Explosion.

India Post as part of 150th birth anniversary celebration of Shri Hangal Kumara Swamiji, released a commemorative stamp on 19th May 2017 at HDMC Samskritika Bhavana, New Cotton Market in Hubballi. It was released by the Union Minister of State for Communications Shri.Manoj Sinha. 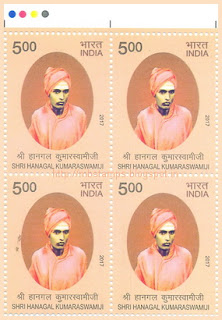 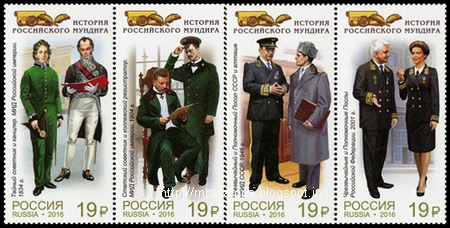 A set of 3 stamp and a miniature sheet was released on 13th May 2017 on the centenary of Champaran Satyagraha. 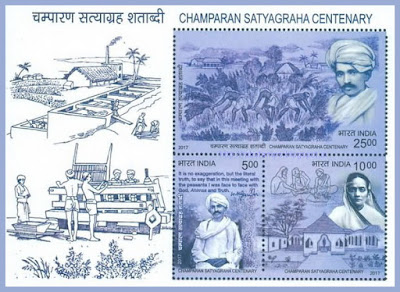 A special cover on Biddatanda Hockey Namme -2017 (21st Kodava Hockey Namme) was released on 12th May 2017 at Madikeri. 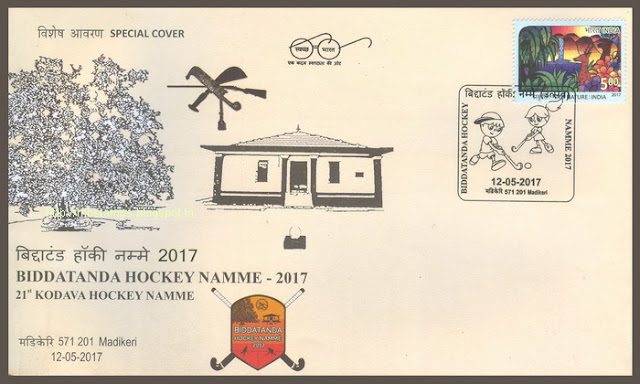 The Biddatanda Family, a pre-eminent clan of Kodavas is based at Napoklu (Nalnad) from time immemorial. It is said that the Biddatanda Chieftains ruled parts of Kodagu at a time now lost to recorded history. The Biddatanda clan now numbers just over 120 persons. Some of its members have held and several continue to hold prominent offices in various Government services and public fields. The family aspires to guide the 20 year old tradition of the Kodava Hockey Festival into its 21st year with dignity, pride and uniting all Kodava families in a single arena, playing and celebrating Hockey from 17th April 2017 to 14t h May 2017 at Napoklu. The special cover is released to commemorate the 21 st Hockey Namme( Festival) in Kodagu.

A special cover was released to celebrate the closing ceremony of the sesquicentennial celebrations of High Court, Allahabad on 2nd April 2017.

Russia Post issued a souvenir sheet on the 70th Anniversary of the International Nuremberg Military Tribunals on 14th December 2016. 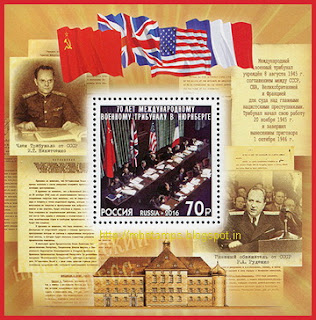 The Soviet Union, the United States, the United Kingdom and France entered into an agreement on trying main war criminals at the London Conference on August 8, 1945.

The postage stamp depicts a judgment hall where the Nuremberg trials took place and in the margins  a portrait of Iona Nikitchenko, a USSR Member of the Tribunal, and Roman Rudenko, USSR Chief Prosecutor, as well as a court house and the document of the proceedings is seen. 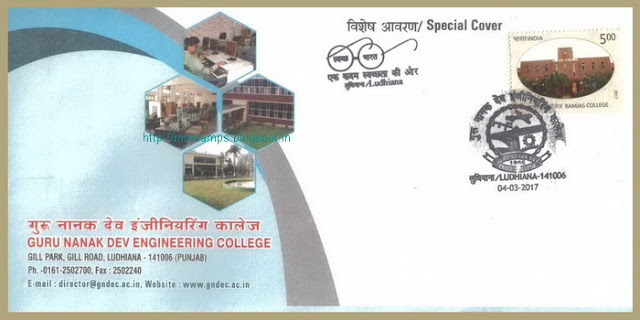 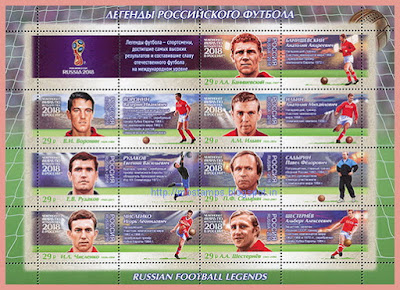 A special cover was released on 28th December 2016 on the ocassion of All India Postal Bandminton Tournament at Ranchi. 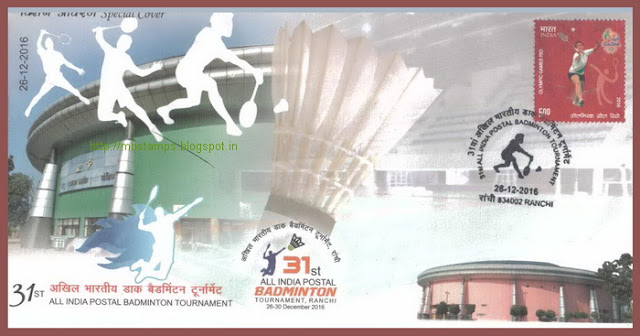 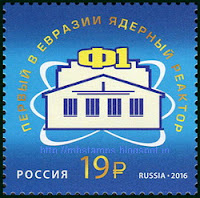 The construction of the F-1 reactor was one of the key achievements of the Soviet atomic project and laid foundation for national nuclear industry. Fundamental research in  fields such as nuclear physics, materials science, reactor engineering, radiation safety and neutron emission metrology were carried out at the F-1 reactor. The F-1 reactor is a monument of science and engineering.

A special cover was released on Kalika Prasad Bhattacharjee at Silchar on 9th May 2017.

A special cover was released on Kanpur Holi: Ganga Mela on 17th March 2017 at Kanpur. 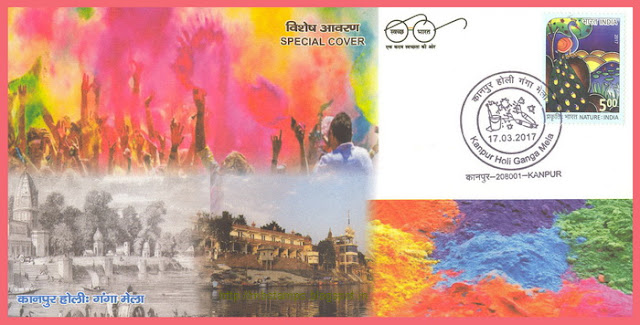 Russia Post released a stamp on 1st December 2016 to celebrate New year which  depicts a New Year circle dance in a skating rink. 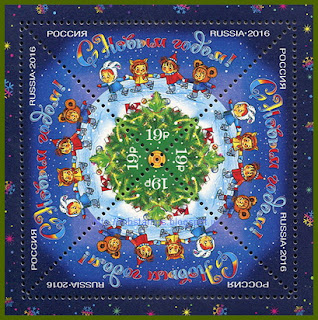 A special cover was released on 4th March 2017 at Dehradun on the Badri tulsi during the Spring Festival. 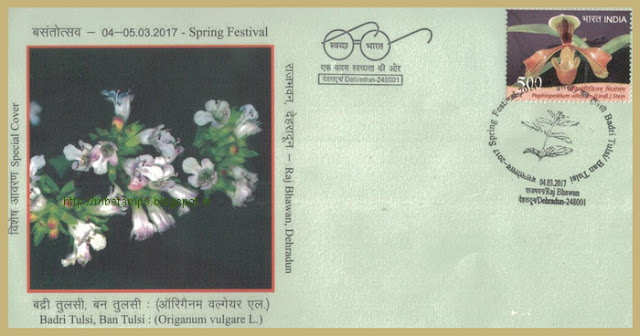 A special cover was released on Vikram University, Ujjain on 7th February 2017.

Set of Maxim cards on the stamps of Nature and Headgears were released by India Post recently. 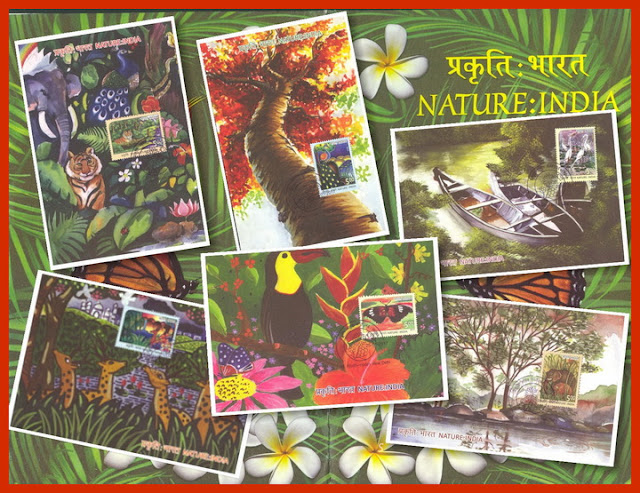 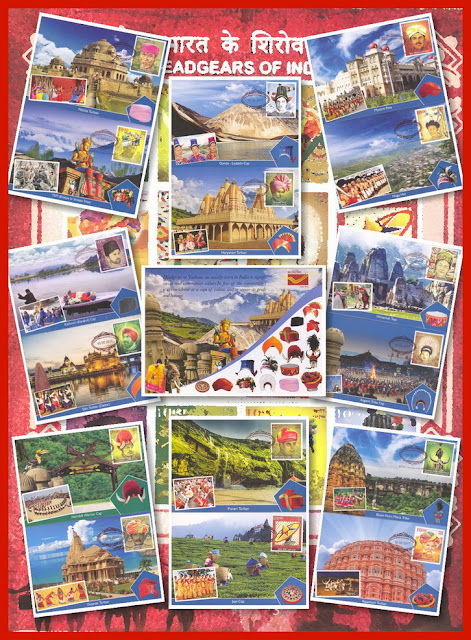 The Battle of Moscow. Joint issue of the Russian Federation and the Republic of Kazakhstan 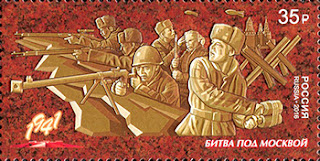 India Post released a stamp on The Telecom Regulatory Authority of India (TRAI) on 5th May 2017 at the closing ceremony of the two-day Seminar on Digital Broadcasting in India – Way forward in New Delhi on 5th May 2017. 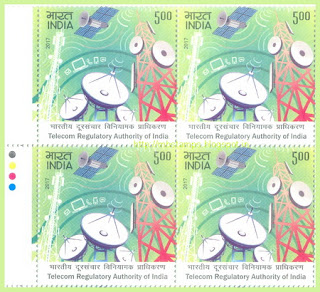 Telecom Regulatory Authority of India (TRAI) was established on 20th February 1997 by an Act of Parliament to regulate telecom services, including fixation/revision of tariffs for telecom services which were earlier vested in the Central Government.

Posted by Mansoor Bolar at 9:45 AM 0 comments

Sights of the cities of St. Petersburg and Ohrid

Russia Post jointly issued a set of 2 stamp on the Sights of the cities of St. Petersburg and Ohrid, Macedonia on 13th December 2016.

St. Petersburg is considered the cultural capital of Russia, there is a large number of architectural ensembles and monuments, museums, cathedrals and garden complexes that impress the imagination with stylistic diversity and splendor. The peculiarities of the architecture of St. Petersburg are the proportionality of urban ensembles, the consideration of the influence of the natural environment and the harmony of various architectural styles.


The city of Ohrid is the pearl of the Republic of Macedonia, the first capital of the Macedonian state, the birthplace of the famous brothers Cyril and Methodius, the creators of the Slavonic script. Ohrid and Lake Ohrid in 1980 were included in the UNESCO World Heritage List. The city is famous for its architectural monuments, in which Byzantine murals were preserved.

The stamps depict the Cathedral of the Holy Life-Giving Trinity of the Izmailovsky Life Guards Regiment in St. Petersburg and the Church of St. John the Evangelist in Caneo in Ohrid.

A special cover was released to mark the World Book and Copyright Day on 23rd April 2017 at Bengaluru.

A special cover was released on 15th March 2017 to celebrate 1st Cricket Test Match at Ranchi.

Russia Post released a set of 4 stamp on depicting Contemporary Russian Art on 29th November 2016 featuring works of modern artists such as Yuri Orlov, Valery Arzumanov and Nikolai Morgun and a sculpture by Dmitry Tugarinov. 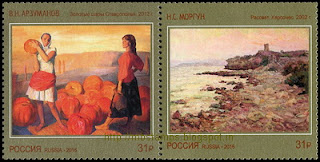 Contemporary Art of Russia stamp series reflects the works of contemporary artists, who reproduce the atmosphere of Russia, its unique natural riches, as well as historical and cultural legacy.

A special cover was released on 23rd April 2017 for the Centenary celebrations of State Central Library, Bengaluru. 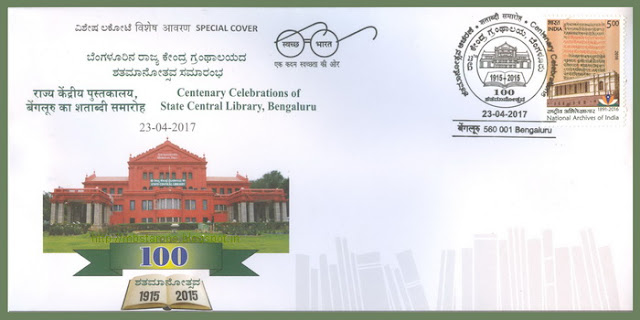 In memory of Dewan of Mysore, Sir Seshadri Iyer for his selfless service and achievements, a memorial hall now called the State Central Library was built in European style during the year 1908 at the centre of rose garden at the lush green Cubbon Park, Bengaluru. The Library started functioning from this building in year 1915 and this special cover is released to mark completion of its 100 years.

Russia Post released a joint issue with Argentina on the traditions of their country on 14th November 2016.

In Russia, porcelain or faience single tea sets consisting of small cups and saucers are used for ceremonial and formal tea-parties. The people of Argentina mainly drink mate tea; its preparation process is a sacred ritual.The postage stamps feature a single tea set and mate.

A special cover was released on 3rd February 2017 to celebrate the 66th Reunion 2017 of  Calcutta National Medical College. 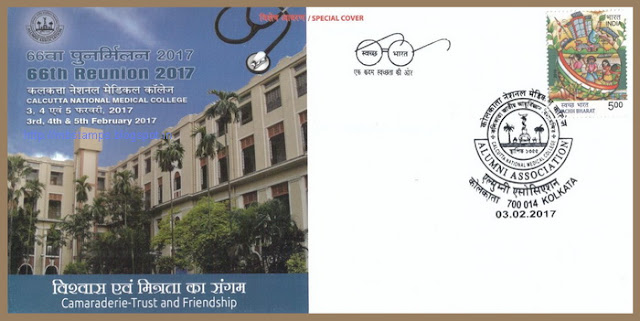 A special stamp was released on the 1000 Anniversary of the “Russian Truth” First Code of Laws of Ancient Rus’ on 31st October 2017.

“Russkaya Pravda” is a set of laws and regulations of Ancient Russia, the first main written source of Russian law.This Code book is an important part of the Russian history of law, also it is a monument of culture, because it reflects the household, the life, traditions and principles of housekeeping of Ancient Russia.

A special cover was released  on 18th February 2017 at Ernakulam to celebrate Platinum jubilee of  Central Marine Fisheries Research Institute.

India Post  released a stamp on May 1, 2017 at New Delhi to commemorate the 1000th birth anniversary of Ramanujacharya, who was a Hindu theologian, philosopher, and one of the most important exponents of the Sri Vaishnavism tradition within Hinduism. 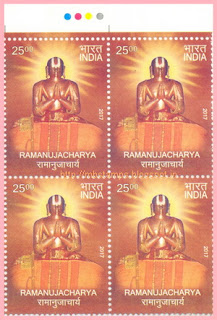