The Emirates Philatelic Association (EPA) had participated in the China 2009 World StampExhibition held in Luoyang, China from 10-16 April 2009. More than 800 exhibitors from 76countries participated in the show and more than 3000 frames were on display.
EPA participants in the show won a number of laurels for their entries at the exhibition.Mr. Abdulla Mohammed Tayyeb Khoory, President of Emirates Philatelic Association won a GoldMedal for his collection "Dubai Postal History", this is a first time to receive such medal for the exhibit about United Arab Emirates.
Posted by Mansoor Bolar at 11:11 AM 0 comments 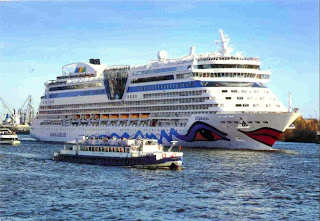 Here is a beautiful card I received from Germany of the Cruise Ship "AIDA diva" through Postcrossing. Thank you Anette, for this card.
Posted by Mansoor Bolar at 3:28 PM 2 comments 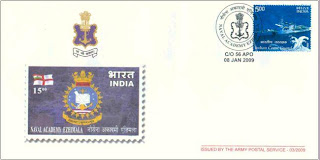 A Special cover was released by the Army Postal Service on 8th Jan 2009 by Prime Minister of India, Dr. Manmohan Singh after inaugurating the Naval Academy at Ezhimala in Kannur,Kerala.The inaugural function was also attended by the Defence Minister and Chief Minister of Kerala. The Chief of Naval Staff Admiral Sureesh Mehta presided over the ceremony.The foundation stone of the institute was laid down by the former Prime Minister of India Late Rajiv Gandhi.

Inaugurating the academy, Manmohan Singh said, "It is my profound pleasure to be present here today at this magnificent campus overlooking the Arabian Sea. There could not have been a better place for the establishment of India's Naval Academy."

Located in Kannur district of Kerala, this academy will not only be the premier officer training establishment of the Indian Navy, but also would be the largest Naval Academy in Asia. Commencing June 2009, all officers inducted into the Indian Navy under various schemes will undergo basic training at this academy.
Posted by Mansoor Bolar at 4:36 PM 0 comments