A Special cover was released to celebrate the 50th Golden Jubilee Celebration of Dhenkanal Postal Division a on 28th December 2021 at Dhenkanal. 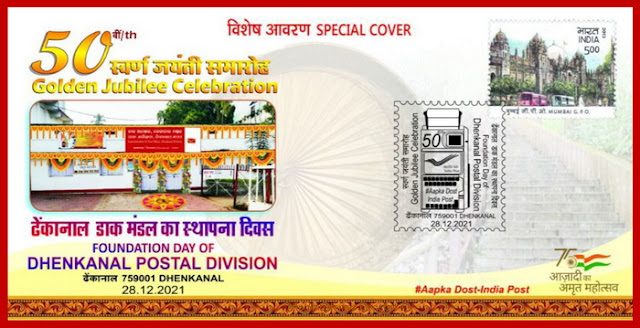 India Post issued a set of two stamps and a miniature sheet jointly celebrating the 50th Anniversary of UAE's formation and the 75th Anniversary of the Independence of India on 18th February 2022.

A Special cover was released to celebrate Golden Jubilee of the Operation Cactus Lily at Bengaluru on 27th January 2022. 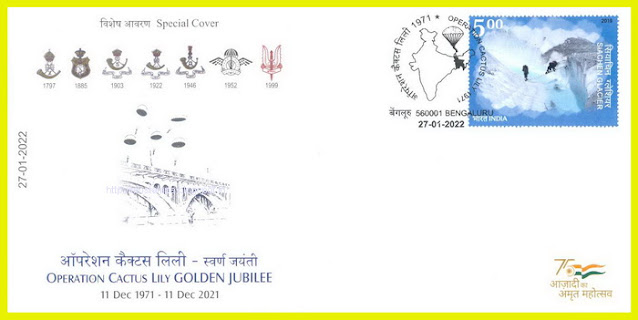 On 11th December 1971, 2 Para (Maratha) airborne groups executed the only airborne assault in the history of independent India. The operation led to capitulation of Pakistani forces in East Pakistan which hastened their surrender and resulted in creation of Bangladesh. The battalion holds the distinction of being the 1st unit to enter Dhaka and demand surrender from Lt. Gen. AAK Niazi, Commander in Chief, East Pakistan. This special cover is released as a part of Azadi Ka Amrit Mahotsav in honour of our brave soldiers who fought valiantly during the operation.
Cover Code: KTK/08/2022
Courtesy: Suresh Rao, Bengaluru.
Posted by Mansoor Bolar at 5:30 PM 0 comments 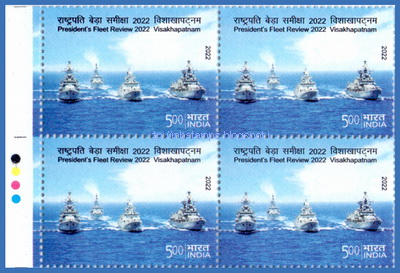 India Post released a stamp to celebrate 50 years of statehood of  Arunachal Pradesh on 20th February 2022. A Special cover was released during the centenary celebrations of Chhatrapati Shivaji Maharaj Vaastu Sangrahalaya at Mumbai on 10th January 2022. 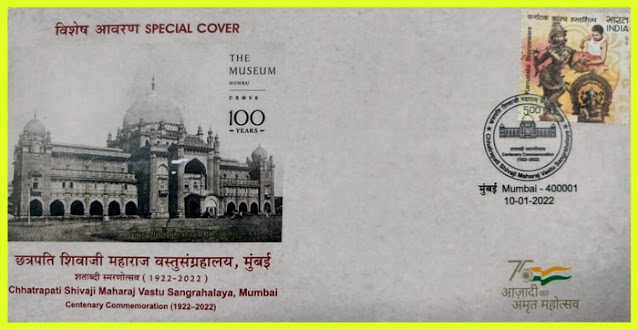 Russia Post released a set of 2 stamps on the Modern trains depicting "Ruskeala Express" and a train with double-decker cars on 2nd August 2021.

India Post released a stamp to celebrate the Platinum Jubilee of Delhi Police on 16th February 2022. 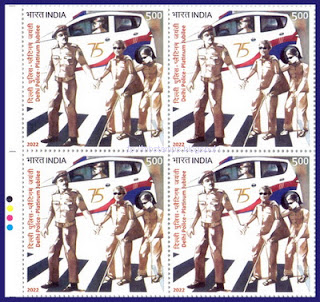 India Post released a stamp to celebrate 50th Anniversary of ICRISAT ( The International Crops Research Institute for the Semi-Arid Tropics on 5th February 2022. 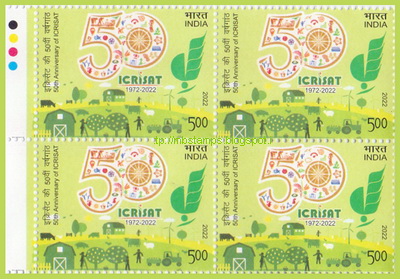 A Special cover on the Doyens of Philately featuring G.Balakrishna Das and G.Madan Mohan Das was released at Chennai on 10th January 2022.

A Special cover on the 90th Anniversary of St. Joseph Church, Kuriachira was released on 7th January 2022 at Kuriachira. 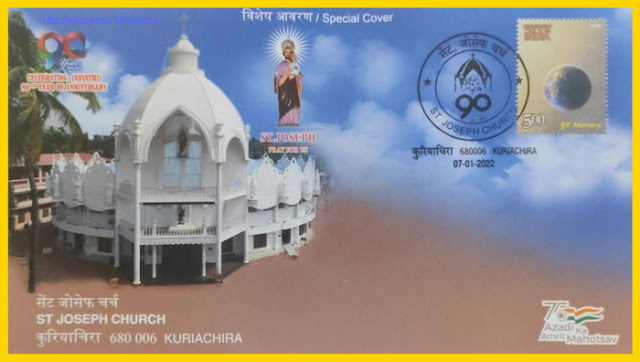 Russia Post released a set of 2 stamps depicting  the Arctic oil loading terminal "Gates of the Arctic" and the tanker "Navigator Albanov" on 29th July 2021.

The Arctic Gate terminal is located in the water area of the Ob Bay near the village of Cape Kamenny, is designed for year-round shipment of oil from the Novoportovskoye oil and gas condensate field to tankers. The Navigator Albanov is the first of six Arc7 class tankers built to provide year-round oil export from the Novoportovskoye field.
Posted by Mansoor Bolar at 10:30 AM 0 comments

A Special cover was released on Sargaalaya ( Kerala Arts and Crafts Village) on 6th January 2022 at Iringal. 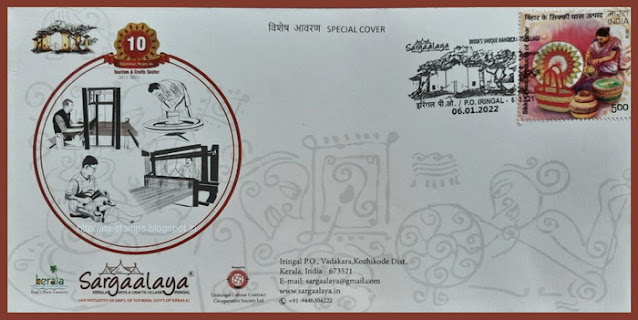 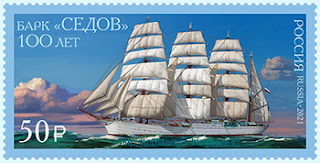 The Sedov is a four-masted barque built in 1921 in Germany. During the Second World War, the barque sailed in the Baltic under the German naval flag. After the war, it was transferred to the USSR as a reparation from Germany and renamed in honor of the famous Russian polar explorer G. Ya.Sedov.
Posted by Mansoor Bolar at 10:30 AM 0 comments

A Special Cover to celebrate the Platinum Jubilee of CSIR - National Physical Laboratory was released on 4th January 2022 at New Delhi.

A Special cover was released at Cuttack on 23rd January 2022 to celebrate 125th Birth Anniversary of Subhas Chandra Bose. 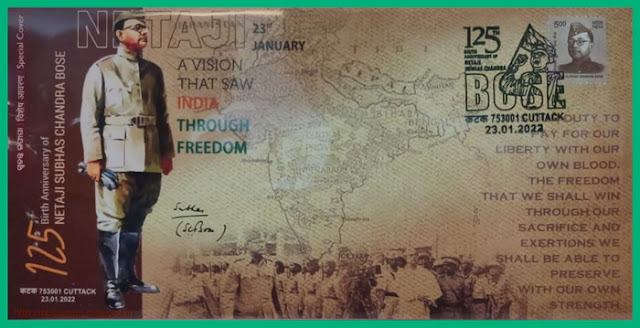 2550 years of the city of Feodosia

Russia Post released a stamp on 23rd July 2021 to celebrate 2550 years of the city of Feodosia depicting a Genoese fortress, a view of the city, an amphora-a hybrid of the IV century BC from the necropolis. 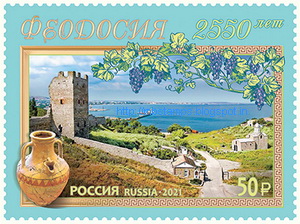 A Special cover to celebrate 136th birth Anniversary of Dr.John Matthai was released on 10th January 2022 at Aranattukara. 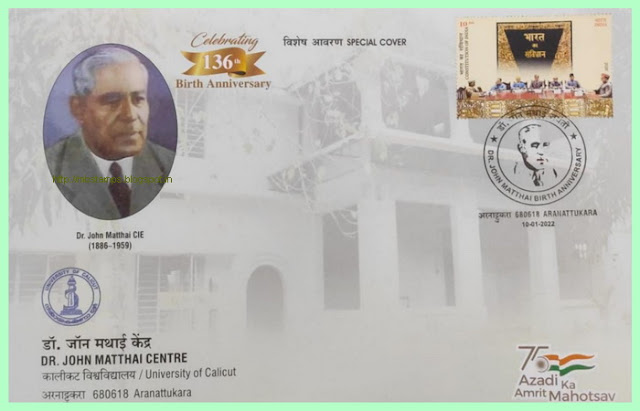 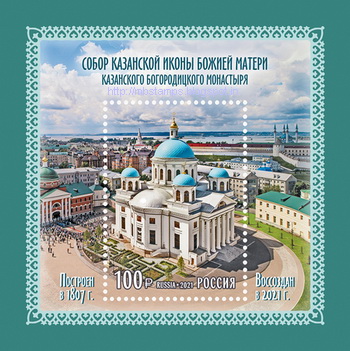 Three Special covers were released on the Occasion of  TRIPEX - 2021 held at Agartala. A cover on Rignai and Risa shawls on 10th, Umakanta Accademy on 11th and on Shri Girindra Chandra Banik were released on 12th January 2022.

A Special cover on the Himachali Chulli Oil was released on 25th December 2021 at Rekong PEO. 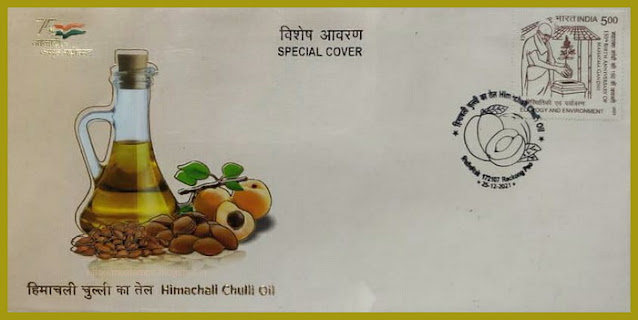 A Special Cover was released on 15th December 2021 at Bengaluru to celebrate 75 years of  L&T Cosntruction & Mining Machinery. 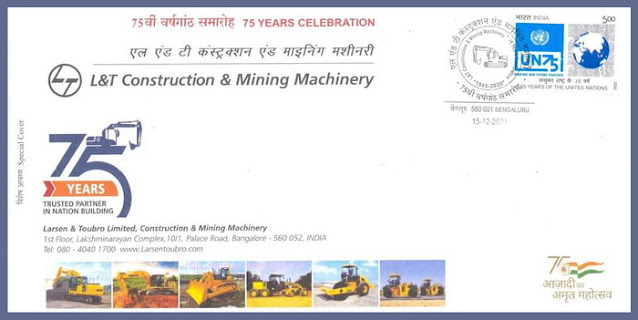 Two Special cancellations depicting dinosaurs were released on the occasion of Children's day at Dibrugarh on 14th November 2021. 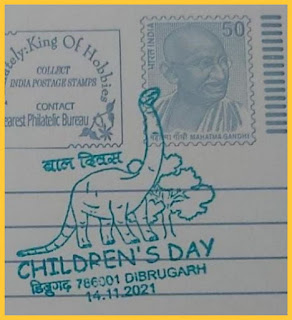 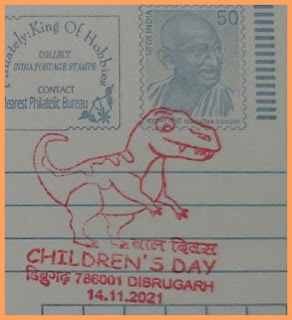