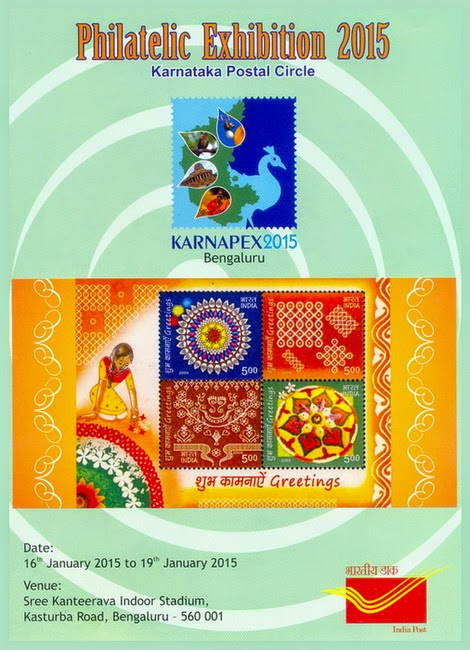 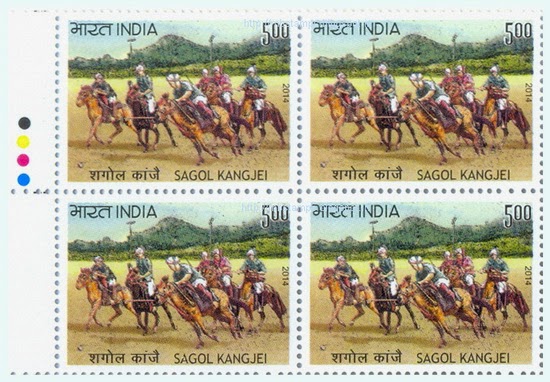 India Post issued a set of stamp and Miniature sheet jointly with Slovenia on 28th November 2014 to commemorate 25th anniversary of the Convention on the Rights of the Child. 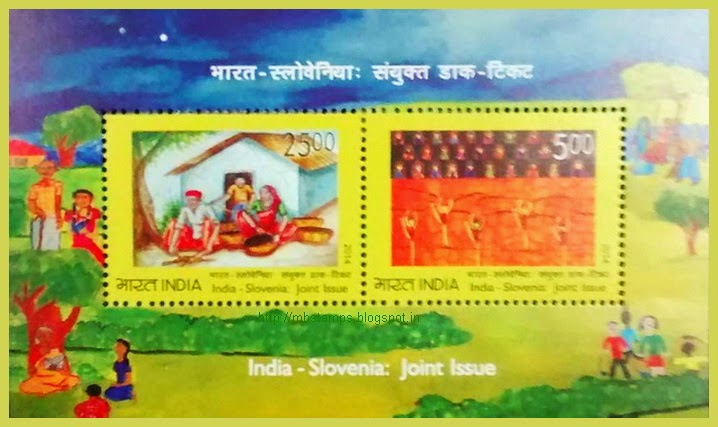 Stamp designs are based on the paintings of  Sara Zivkovick of Slovenia and Roshan Anvekar of  India. 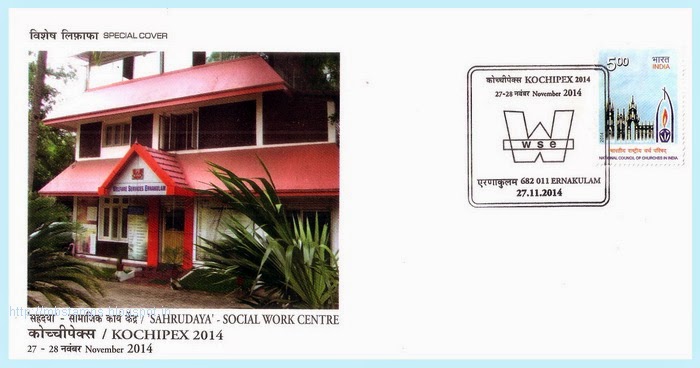 Special cover on V.R.Krishna Iyer was released at Ernakulam on 28th November 2014. 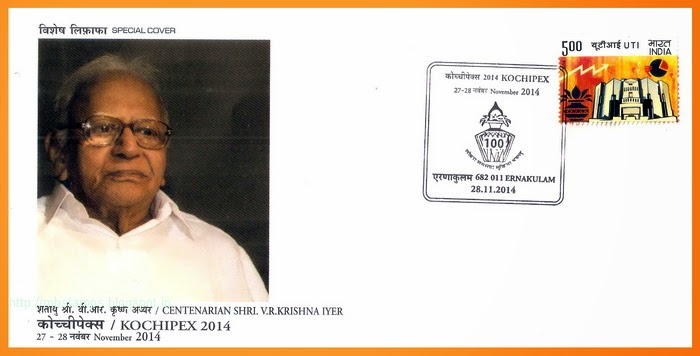 The Centenarian Sri. Vaidyanathapuram Ramakirishna Iyer, popular asJustice V. R. Krishna Iyer born on 15-11-1915 is the former judge ofSupreme Court of India.  A born spokesman of law, the jurist of the jurists, a prolific writer, a fiery orator and an advocate of humanrights.  Even at his 100th year of age, he is actively engaged in allSocio-legal movement at his residence "Sadgamaya', a light house forthe emerging generation.
Cover code: KL-18/2014
Courtesy: Sreejesh Krishnan, Tiruvananthapuram.

A set of 4 stamp and a Souvenir Sheet was released on His Thai Majesty's Ship on 20th November 2014. 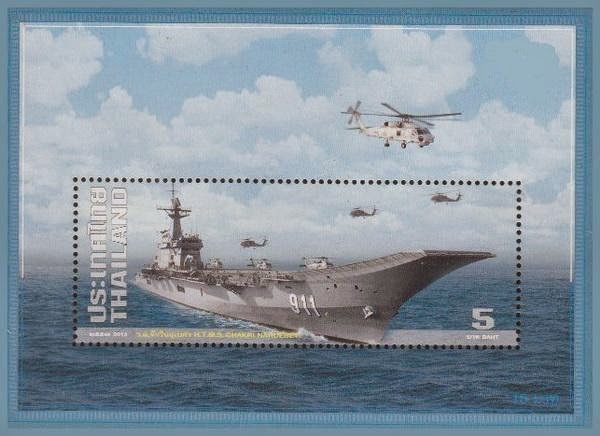 Furthermore, the image of H.T.M.S. Chakri Naruebet is presented on the Souvenir Sheet. She was the first Helicopter carrier of Thai Royal Navy with the size of 182.60 x 30.50 meters are a draught of 6.25 meters. Her construction took place in Spain in 1993. H.T.M.S. Chakri Naruebet was launched by her Majesty Queen Sirikit in 1996 and His Majesty the King anointed her nameplates in 1997, and gave the name Chakri Naruebet which translates "In Sovereign of the Chakri Dynasty".

A special cover was released on Dr.Ayyagari Sambasiva Rao on 16th November 2014 in Hyderabad on occasion of his birth Centenary.

A special cover was released on Kailashpati Mishra on 3rd November 2014 at Patna. 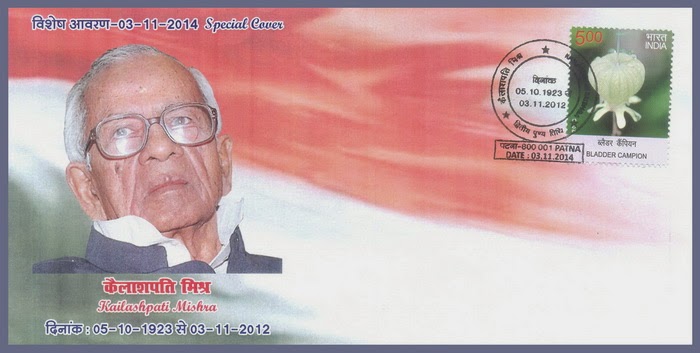 A special cover was released on 19th November 2014 during the Malappurampex - 2014 on Conolloy's Plot.

Special Cover - Conolly's plot - The oldest teak plantation in the world - situated in Nilambur, Malappuram District.It is named after H V Conolly, the Malabar District Collector between 184-1855 during the British rule, who was instrumental in planting tek in the entire Nilambur area.The cancellation is of the hanging bridge in Conolly's plot.

Posted by Mansoor Bolar at 8:00 AM 0 comments

A Special Cover was released on 17th October 2014 on the  New Judicial Complex of Muvattupuzha.

Russia Post released a set of 6 stamp on 28th August 2014 featuring cities of Military Glories. They were on the cities Anapa, Vladivostok, Carpet, Kolpino, Stary Oskol and Tikhvin. 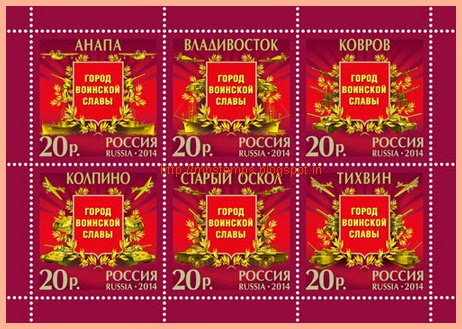 A special cover was released in Delhi on 3rd November 2014 on occasion of 69th Annual Conference of World Association of Zoos and Aquariums, New Delhi, India. 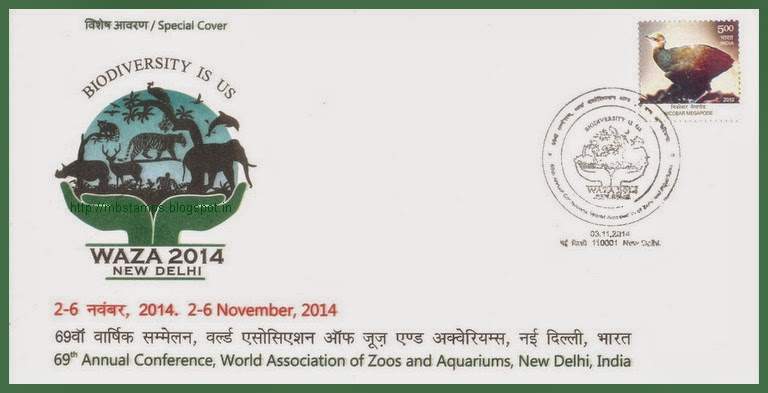 A special cover was released in Lucknow to celebrate the golden jubilee of State Bank of India, Lucknow circle on 31st October 2014. 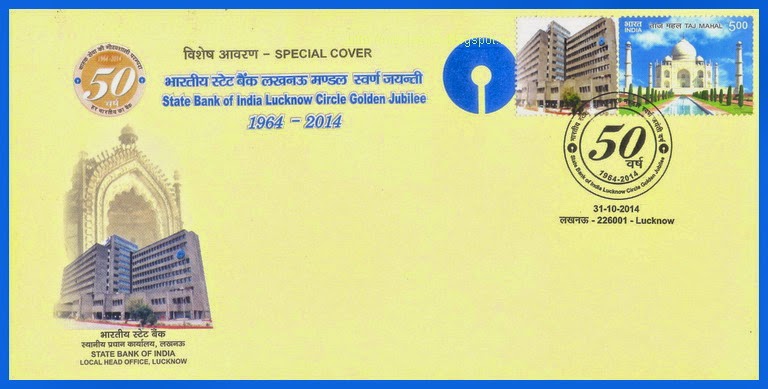 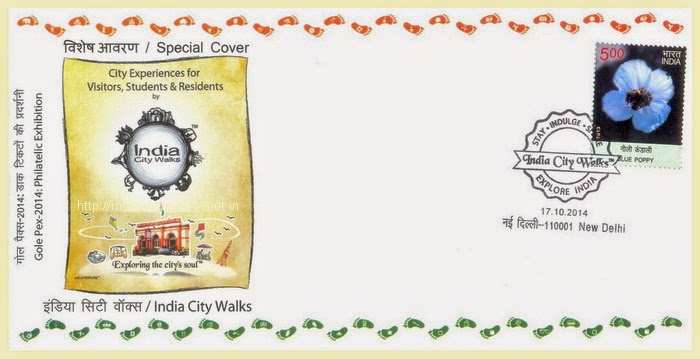 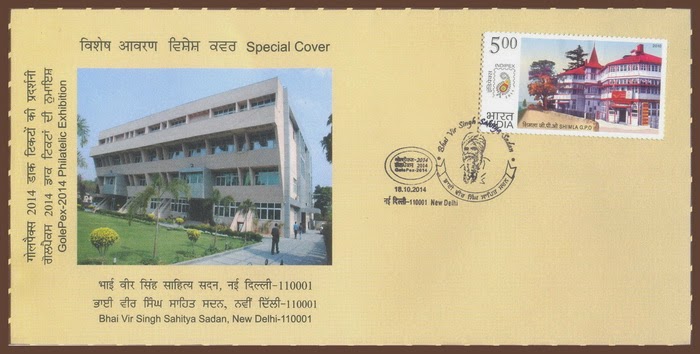 Felicitation to Winners of CWG and Asian Games.

A special cover was released on 6th November 2014 in Bangalore by the Department of Youth Epowerment and Sports, Govt. of Karnataka to felicitate the players of Karnataka who participated and won medals in Commonwealth Games 2014 held in Glasgow and Asian Games 2014 held at Incheon, South Korea. 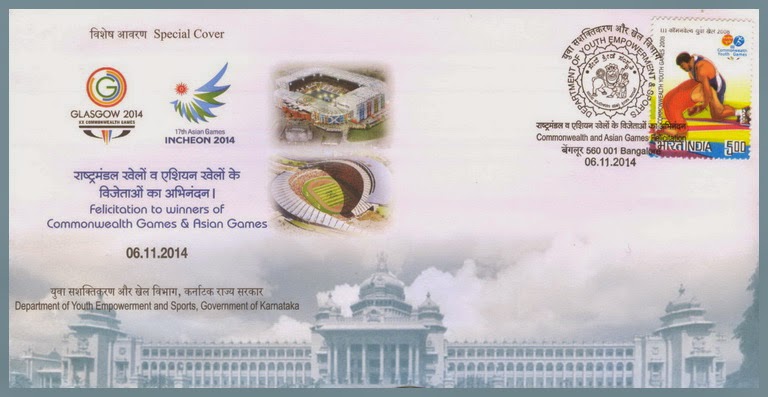 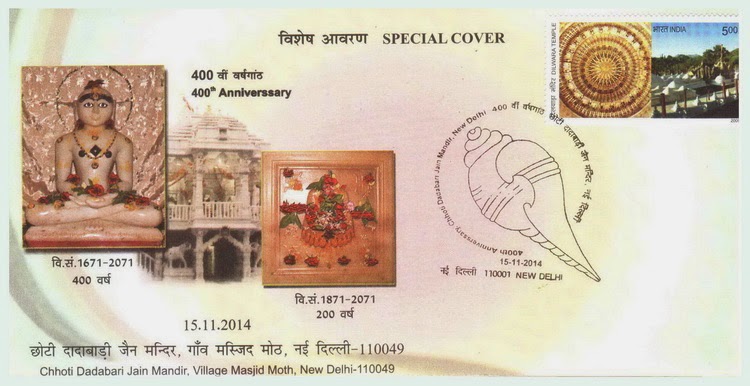 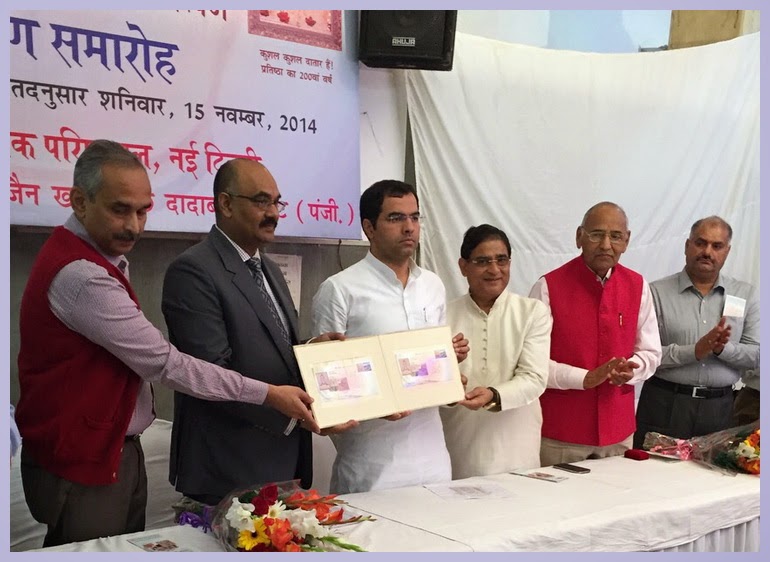 INDIAN MARS ORBITER MISSION:
India created history by becoming the first country in the world to reach the red planet's orbit in the first attempt and also became the first Asian country to have sent its space craft successfully intoMars' orbit.  the Mars Orbiter Mission - Mangalyaan was launched on5th November 2013 and after completing its 10 month journey, it wassuccessfully put into Martian orbit on 24th September 2014. This Special cover is brought out to marks the success story of Mars Orbiter Mission. 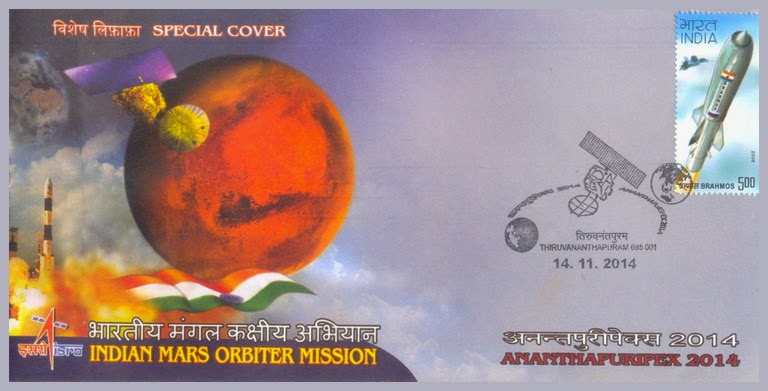 Fort Girls' Mission High School, Thiruvantnthapuram was founded by Ms.Augusta Mary Blanford of Churuch of England Zenana Missionary Societyon 3rd November 1864 with the blessings of Ayilyam Tirunal Rama Varma.The school was initially known as "Vadakke Kottaram Pallikoodam" and later changed as Zenana Mission School.  On its elevation to thestatus of Girls' High School in 1951, its name was again changed as Fort Girls Mission High School.  This Special Cover is brought out tomark the completion of 150 years of its inception. 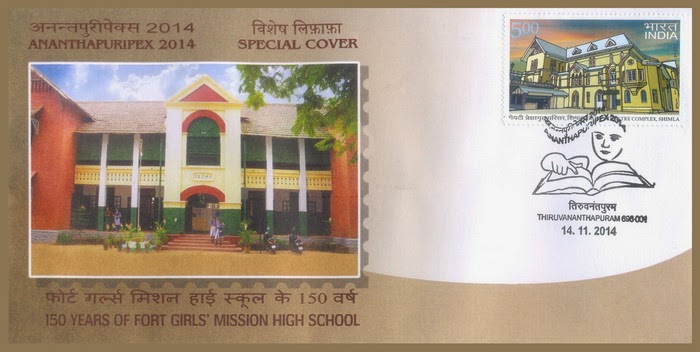 
Children's Day is recognized on various days in many places around the world, to honor children globally. Universal Children's Day takes place annually on November 20. In India, Children's Day is celebrated on 14 November, the birthday of the country's first Prime Minister Jawaharlal Nehru born in 1889.

Jawaharlal Nehru, who was fondly called Chacha Nehru (Uncle Nehru) by the kids, emphasized the importance of giving love and affection to children, whom he saw as the bright future of India. This day is known as Baal Divas in Hindi.


Many functions are organized in schools, offices and other organizations. All over the country, various cultural and social institutions conduct competitions for children. Children's Day is seen as a day for the kids to engage in fun. Children take part in many sports organized for them.

India Post also celebrates Children’s Day by releasing special postage stamp every year on 14th November. Stamps issued on this occasion are the only stamps which are not designed by professional stamp designers of India Post.

India Post or Bhartiya Dak Vibhag as it is known as in Hindi holds drawing competition on all India level and the selected best entries gets its place as design of the commemorative postage stamp, first day cover and various other such items which are issued on 14th of November by the name of that particular school student. 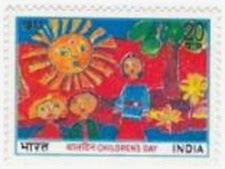 From 1973 India Post started to issue stamps in Multicolor and also the trend of using the children's painting was started.
From the year 2006 India Post also started issuing Miniature sheets on the painting of Children.


There has been no stamps issued in the year 2014 on this theme till date.

India Post Organizes 'Design a Stamp Competition' for School children. The competition is organized on national level and hundreds of thousands of school children from every corner of India take part in it. A theme is given and the competitors and they have to design it in ink, water color or oil paint. Winning design is selected to depict on Children's Day stamp. The competition is open for the student of Standard IV to Standard XII, and is divided in 3 groups. The winning entries from each group gets its place on Children’s day stamp, First Day Cover, Miniature sheet and various such other collectables by released by India Post every year on 14th November.

Many stamp collectors like to specialize themselves in a specific theme. Gandhi stamps are one of the most popular themes in the collectors of stamps. Now Children's day stamps also have become a popular theme amongst the collectors. It is notable thing that India post has issued a large number of stamps on both the themes.

Stamps on this theme are displayed in most of the philatelic exhibitions in India.I started collecting stamps in my school days and still continuing the same.

References: Articles in various news papers, internet and from personal collection.
Note: All the stamps released from 1957 to 2013 has not been included in this article due to space restriction.

On the occasion of the 125th Birth Anniversary of Pt. Jawaharlal Nehru, Department of Posts, Ministry of Communications & IT is bringing out a collection of stamps issued so far showcasing India’s First Prime Minister. Pt. Nehru is the architect of modern, Independent India whose thoughts and ideas have left an indelible imprint on the national psyche and continue to be of relevance even today.

Department of Posts salutes the vision of Pt. Nehru by bringing out this collection which contains some of the most beautiful and evocative stamps capturing him in a variety of moods.

A special cover was released on Kalpana Chawla Planetarium, Kurukshetra on 17th October 2014 at Ambala. 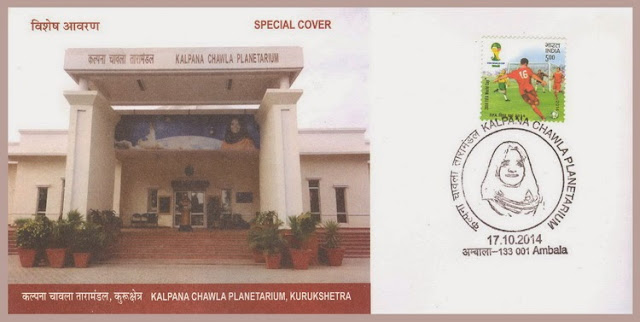 A special cover was released during the Ananthapuripex - 2014 to mark the completion of 125 years of Tranvancore Anchel stamps on 13th November 2014. 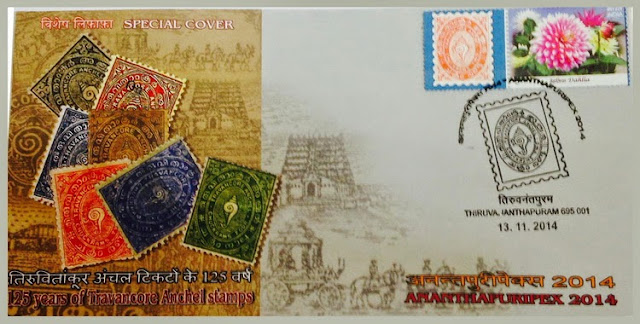 The former Indian State of Travancore had an independent Postal system called Anchal Service. In 1861(1036ME) Ayilyam Tirunal Maharaja opened the Anchal System to the public. The first adhesive Anchal stamps of denominations 1 chakram, 2 chakrams and 4 chakarams were introduced on 16-10-1888 during the reign of Sree Moolam Tirunal Maharaja. 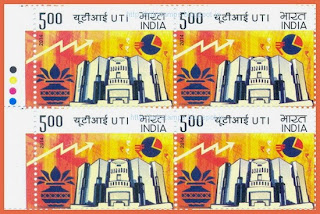 Two of the special covers released in the month of September 2014: 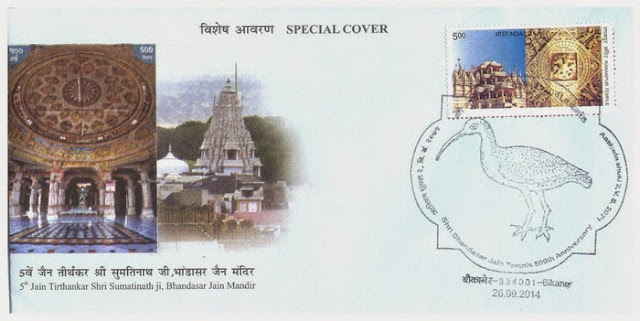 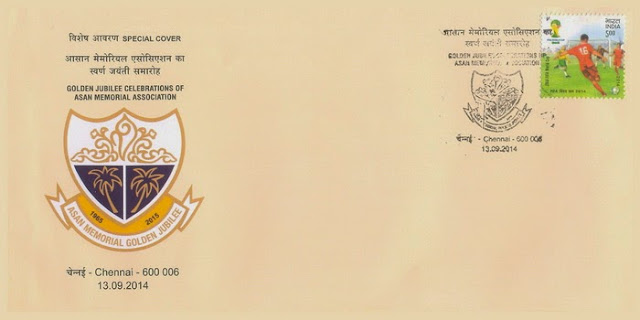 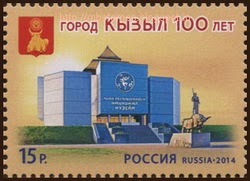 A special cover was released by the CPMG, M.S.Ramanujan to celebrate the birth centenary of K.S.N. Adiga, former Chairman at the Karnataka Bank Auditorium in Mangaluru on 5th November 2014. 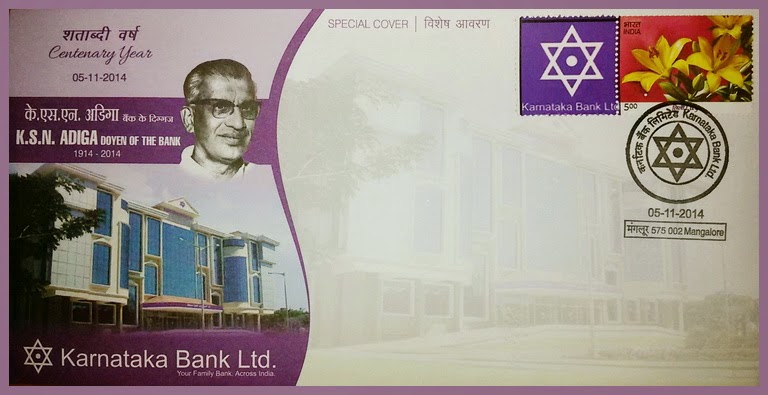 Here is another special cover released on 14th September 1984 on the occasion of  the diamond jubilee year of Karnataka Bank. 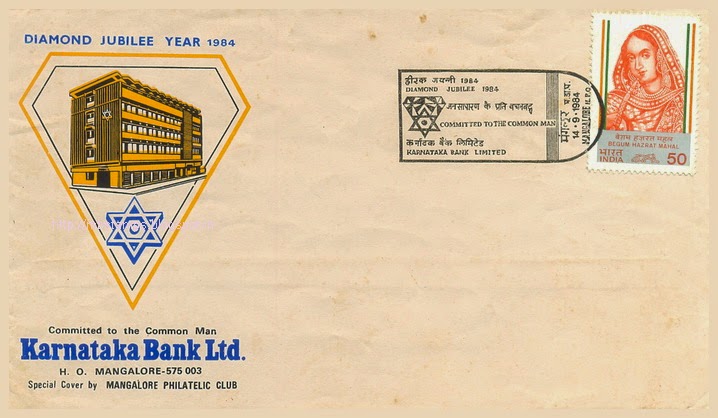 India Post issued a stamp to commemorate 15 years of Liver transplantation in India on 4th November 2014. 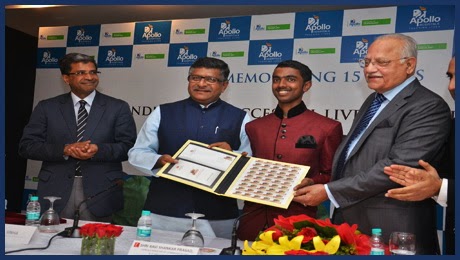 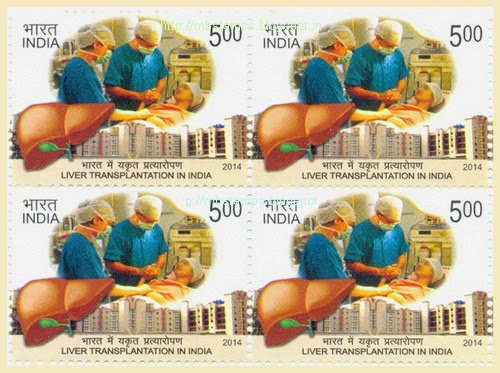