A special cover was released on the ocassion of dedication of Boeing P-81 in the service of the Nation at Arakkonam on 13th November 2015. 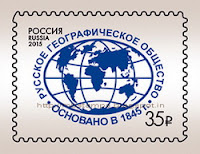 The Russian Geographical Society (RGS) was founded by a Royal Decree of Emperor Nicholas I in 1845. The main activity areas of the Society are expeditions and researches, education and teaching, nature protection, book-producing, and youth outreach.

India Post in it's website has published a notification regarding hike in foreign postage rates with effect from 1st December 2015.

A special cover was released on the ocassion of the Suicide Prevention Conference by Thanal, the  Calicut Chapter of Befrienders India on 20th November 2015 at Calicut. 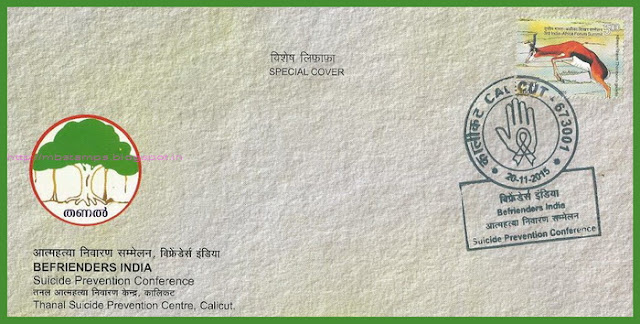 THANAL : The Calicut Chapter of Befrienders India is the national unit of Befrienders Worldwide, an international organization engaged in suicide prevention activities globally. Any caller can avail free service through direct visit / over phone or email during working hours. 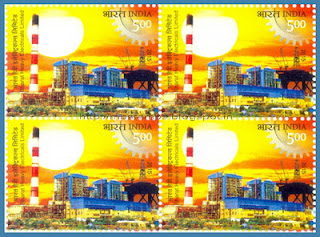 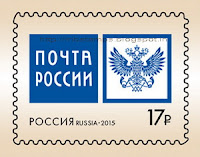 on 23rd July 2015 Russia post issued a stamp recognising it's operation providing the universal postal services throughout the territory of the Russian Federation. The Logo FSUE "Mail of Russia" is two squares, one of which, written in blue background "Russian Post" and the other - the two-headed eagle. The blue color, which is characteristic for the post, was, in fact is one of the national colors of Russia.

A Special cover was released to Celebrate 150 years of Government College of Art and Craft, Calcutta on 29th September 2015. 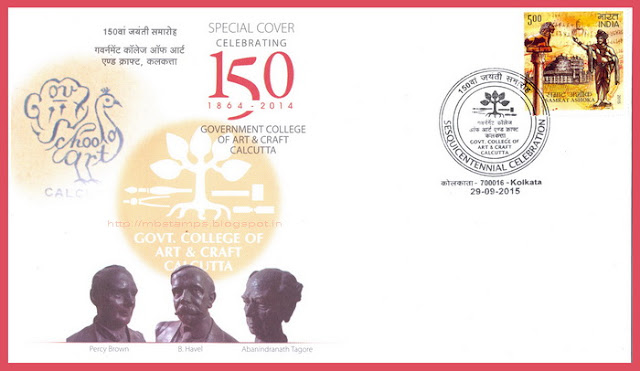 The journey of the Government College of Art and Craft, Calcutta began in the year 1864. Under the aegis of stalwarts like H.H.Locke, B Havel, Abanindranath Tagore and Percy Brown, it emerged within the course of a few decades as the epicentre of the Indian Art Movement. Under their guidance and able leadership many Indian artists bloomed and they started ruling the art world of India and South East Asia. In later years celebrated artists like Ganesh Pyne, Jogen Choudhuri, Ganesh Haloi, Sunil Das, Sakti Burman and Somnath Hore have succeeded in consolidating the Indian modern art movement in the world on a firm footing. Rich with its legacy of a hundred and fifty years, the Government College of Art and Craft today occupies a pride of place as a heritage institution, a temple of learning committed to the cause of art and art education. 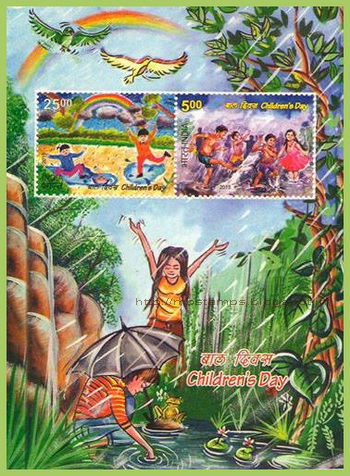 The designs on the stamps and miniature sheet are based on the prize-winning entries of Stamp Design Competetion. Yamini K.,Student of St. Joseph Secondary School, Thalassery. Kimaya Gupta and Rohit Gupta have been selected for two stamps and miniature sheet. Designs of V. Hemchandran and Binita Vishwajita have been selected for First Day Cover and Brochure respectively.

Yamini.K, daughter of Sujan.P.K. and Roopashree K is a student of XI (Plus I ) at St. Joseph’s ,Thalassery,  Kannur, Kerala. Yamini is interested in painting, Writing poems and short stories in periodicals and Carnatic Music. 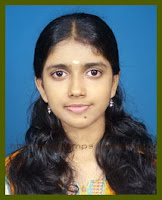 Prince Pyotr Bagration (1765-1812) was Russian military leader, General of Infantry, veteran of the Russian-Turkish wars and the Italian and Swiss campaigns of Alexander Suvorov, the hero of the Patriotic War of 1812 and a veteran of the Polish Campaign (1793-1794).

Russia Post released the postage stamp on 10th July 2015 which depicts a portrait of Pyotr Bagration with the battle scene on the background. 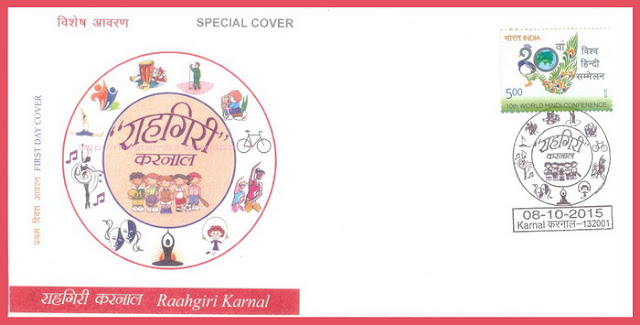 Two special covers were release during KNLPEX-2015, Karnal District Level Philatelic Exhibition held on 8th and 9th October 2015. a special cover on 8th October 2015 was released on ‘Raahgiri Karna a campaign is initiated by the Haryana Police from 30th August 2015. It gives an opportunity to people to come together to stay fit and indulge in walking and cycling.On 9th October 2015 a Special Cover on Smart City Karnal was also released.

A stamp was released on 7th July 2015 in Russia during the  meeting of the The Shanghai Cooperation Organization (SCO) - a regional international organization, founded in 2001, the leaders of China, Russia, Kazakhstan, Tajikistan, Kyrgyzstan and Uzbekistan. The stamp depicts the main attraction of the city of Ufa - a monument to the Bashkir national hero Salavat Yulaev and in the background of historical places of the city. 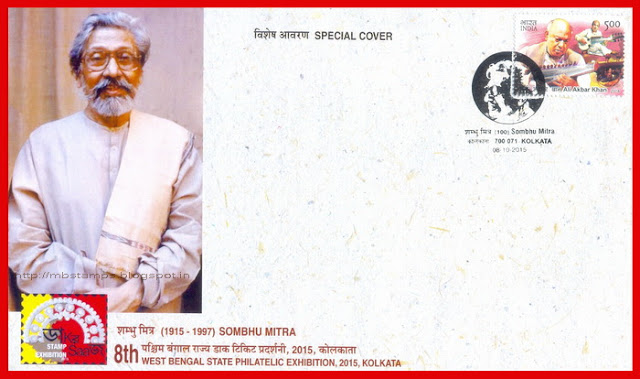 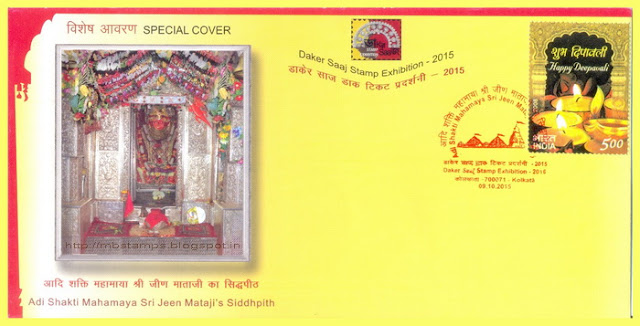 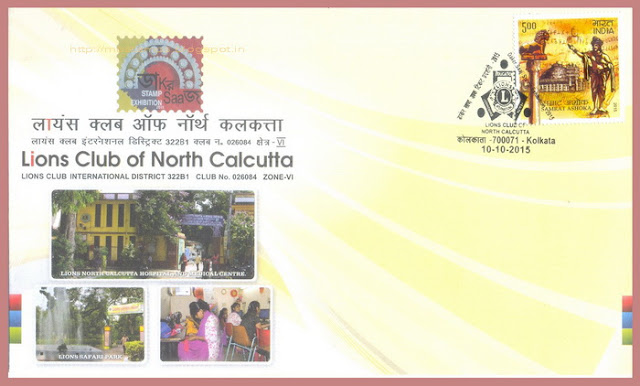 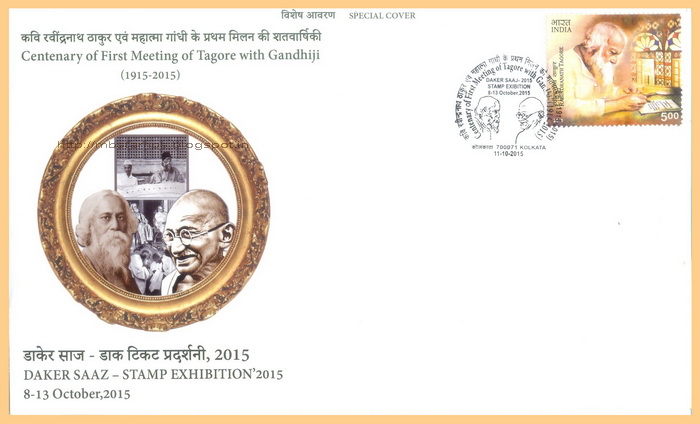 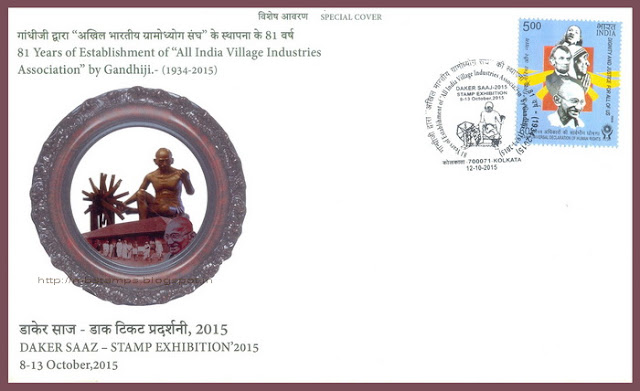 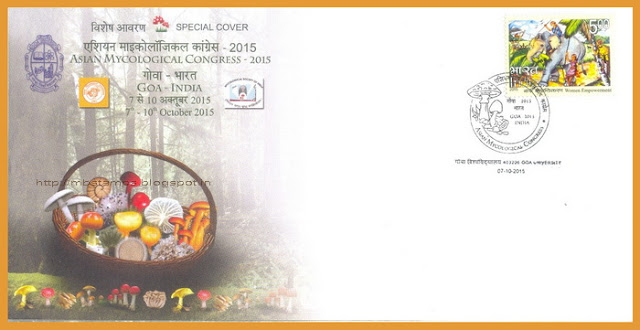 ‘INDUSEM2015’, the 11th INDO-US World Congress of Emergency Medicine was organized at All India Institute of Medical Sciences, New Delhi from 30th September to 4th October 2015 at New Delhi. A special cover on Injury prevention was released in Delhi on 3rd October 2015. 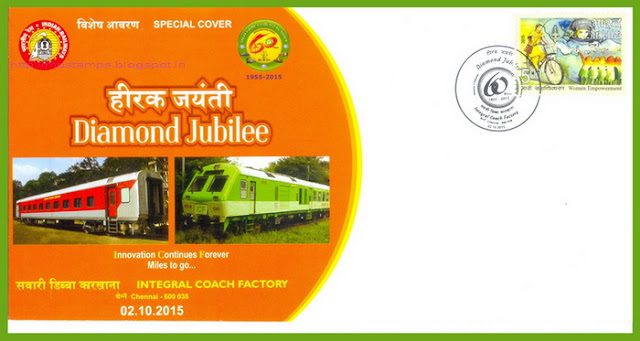 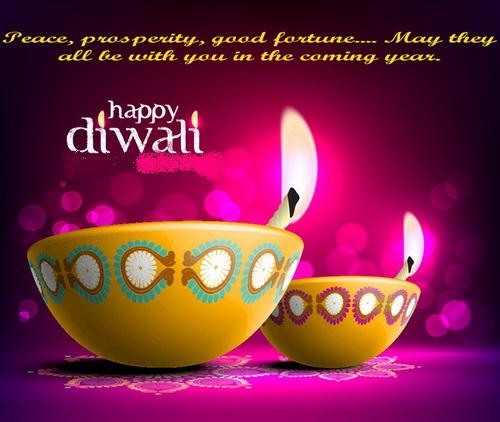 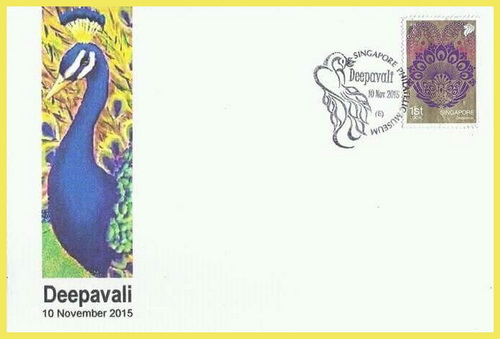 Commemorative Stamps on the First and Third Gorkha Rifles were released to celebrate completion of  200 years of their raising and to mark the Bicentenary of both the regiments on 2nd November 2015. 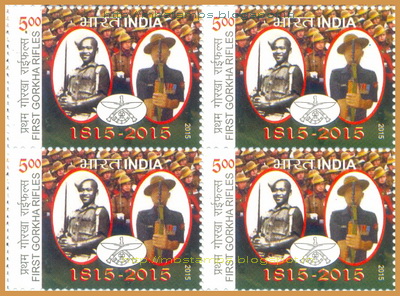 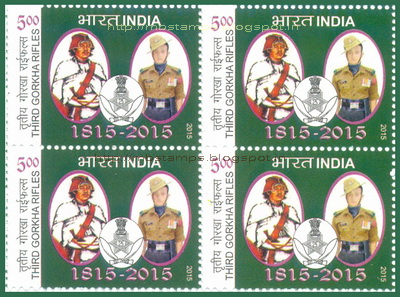 Year of Literature in Russia

A  stamp was released to celebrate the Year of Literature in Russia on 25th June 2015.The stamp depicts the logo of the "Year of Literature 2015" whose main tasks is to draw attention to reading, problem-solving book sector and stimulate interest of Russians to the books. 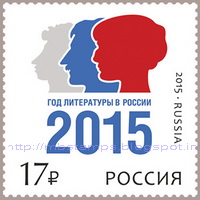 On the occasion of World Post Day a Special Cover on ‘Digital India Post’ was released at Mumbai on 9th October 2015. 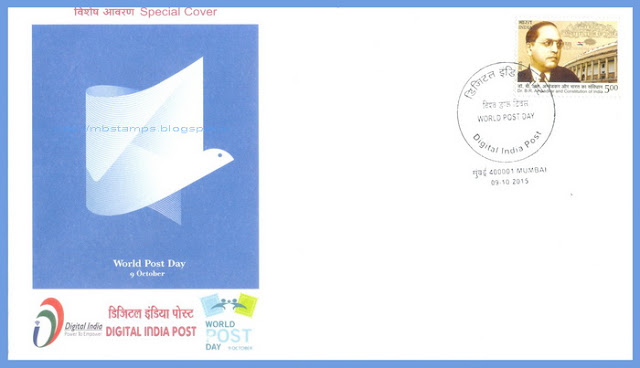 On the occasion of 10th Swargarohan Anniversary of Jain Saint Pujya Jayanand Muni Maharaj, a Special Cover was issued at Jaipur on 30th September 2015.

A special cover was released on Lions Club of  North Calcutta on 10th October 2015 at Kolkata. 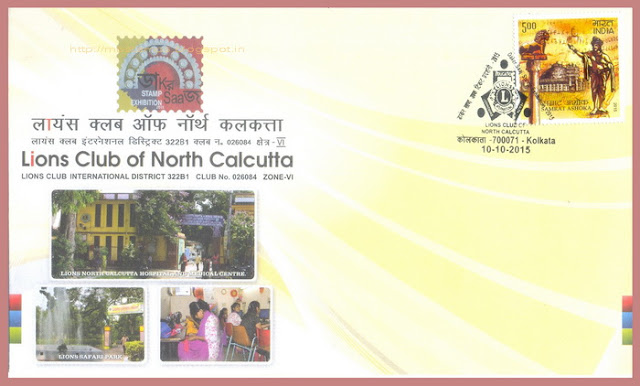 Department of Posts is holding Stamp design competition for ‘Republic Day 2016’ and the theme of the competition is “Vibrant India”.


For other Terms and Conditions to participate in “Republic Day 2016 - Stamp Design Competition” please visit the Web site of India Post.
Posted by Mansoor.B at 10:50 AM 0 comments 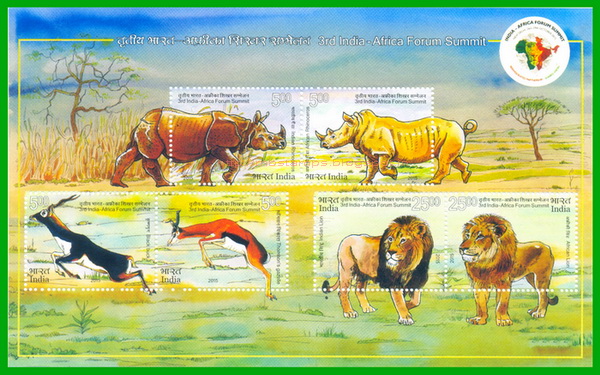 Two types of  Miniature Sheets with 6 stamps each were released on the same design, one being  ordinary   ( price same as face value of Rs.70/- )and the other with stamps embossed in Gold and Silver colours priced at Rs. 300 with a presentation pack, which was made available online at e-post.  Four stamps are in denomination of Rs. 5 and two stamps are in denomination of Rs. 25 each. Stamps depict Indian and African Rhinoceros, Black Buck, Thomson's gazelle, Indian Lion and the African Lion. 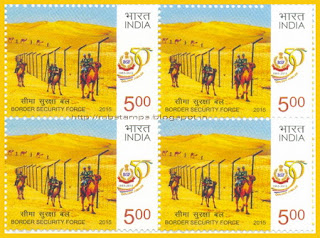 A set of 2 stamp was released on the paintings of PA Fedotov, Russian painter and graphic artist on 23rd June 2015.

A special cover was released on St Michael's High School to celebrate its feast day on 28th September 2015 at  Patna. 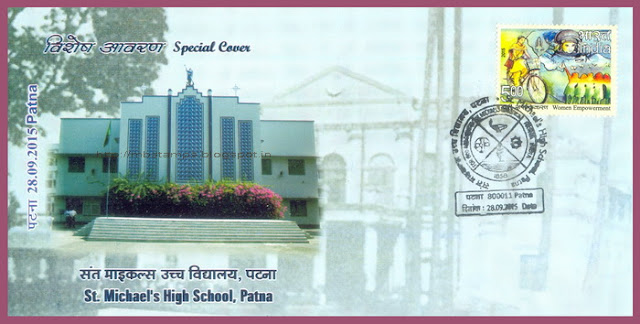 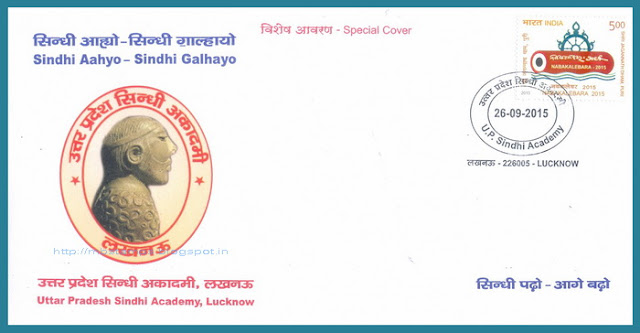