The Indian Audit & Accounts Department was formed in 1860. In 1950 , when the Constitution came into force, the Auditor General was re-designed as the Comptroller and Auditor General of India.

For carrying out diverse functions, the comptroller & Auditor General of India is assisted by one of India"s oldest and premier services - the Indian Audit and Accounts Service.

Institutionalised training arrangements for IA&AS Officers were started in Shimla in 1950 at the IA&AS Training School, which is one of the oldest training institutions in the Country. It was upgraded on 28th February 1990, as the National Academy of Audit & Accounts.

The academy is celebrating its Diamond jubilee this year. 'Yarrows' where all IA&AS Officers from 1950 have lived during their training is featured on the cover.
Posted by Mansoor Bolar at 3:29 PM 0 comments

The Queen's Baton Relay is one of the greatest traditions of the Commonwealth Games, in having been the curtain-raiser to every games since Cardiff in 1958. The relay symbolism the gathering of  people from across the Commonwealth at the four-yearly festival of sport and culture. 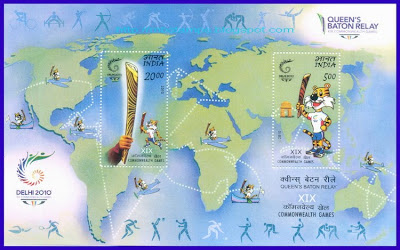 Over the years, the Queen's Baton Relay has evolved into a powerful symbol of the unity and  diversity of the Commonwealth of Nations. With each games the tradition grows in scale and  significance - including more nations, involving more participants and generating more excitement  than ever before, but the Delhi 2010 Baton's journey is planned to be the biggest yet. It is set to  be the longest and most technologically advance of the Baton Relays to date.

The Baton has been designed by Michael Foley, a graduate of the National Institute of Design. It is  a triangular section of aluminum twisted into a helix shape and then coated with coloured soils  collected from all regions of India. The Coloured soils are a first for the styling of a Queen's  Baton. A jewel encrusted box has been used to house the Queen's message, which was laser-engraved  onto a miniature 18 carat gold leaf-representative of the ancient Indian Patras. The Queen's baton is economically contoured for ease of use. It is 664MM high, 34MM wide at base, and 86MM wide at  the top and weighs 1,900 grams.

The Queen's baton has a number of technological features including:
* The ability to capture images and sound.
* Global positioning system (GPS) technology so the baton's location can be tracked.
* Embedded light emitting diodes(LEDs) which will change into the colours of a country’s flag whilst in that country.
* A text messaging capability so that people can send messages of congratulations and encouragements  to the Baton bearers throughout the relay.

The Queen's baton was launched on 29th October 2009 at Buckingham Palace in London, with Her  Majesty Queen Elizabeth II handing the Baton to Her Excellency the President of India, Smt. Prathibha Devisingh Patil. Abhinav Bindra, the Olympic air rifle champion, began the Baton's  journey with a relay around the Queen Victoria Monument.

The Queen's baton has traveled through all the Commonwealth countries and landed in India on 25th  June 2010 where it will spend 100 days touring the country.

To commemorate this historic event India Post is happy to issue a set of two commemorative postage  stamps to mark the baton's entry into India as a herald to the Commonwealth Games 2010, one  depicting the baton and the second, a proud Shera holding it with Delhi's India Gate in the  background.
Posted by Mansoor Bolar at 11:17 AM 0 comments

Authorized by the Bureau of Shanghai World Expo Coordination and the China Post Group, the Shanghai Philatelic Corporation has officially issued a set of pure silver commemorative stamps for the China Pavilion. 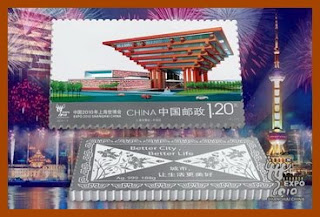 On the face of the stamp is the pattern of the China Pavilion and the reverse side has a lily design and the Chinese traditional bat-shaped pattern representing open-mindedness, a harmonious Expo and benefiting China. The Expo theme "Better City, Better Life" is also printed on the reverse side in both Chinese and English. In addition, the stamp carries an anti-counterfeiting label specifically made for the Expo's licensed products.
For more details : English People Daily
Posted by Mansoor Bolar at 12:11 PM 0 comments 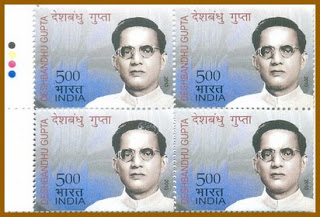 India Post released a  commemorative stamp on Deshbandhu Gupta on 14th June 2010. Deshbandhu was a freedom fighter, was the supporter of Gandhiji in Non-cooperation movement. He was also a journalist and writer who wrote articles for the Bande Mataram newspaper of Lala Lajpat Rai. Later he the founder of the newspaper "Tej", he also owned the News Chronicle ( now known as Indian Express) along with Ram Nath Goenka.
Posted by Mansoor Bolar at 4:11 PM 0 comments 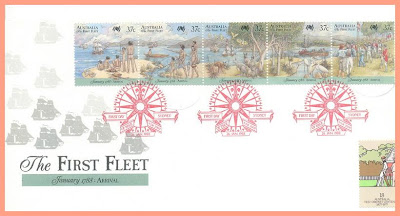 Botany Bay, the First Fleet's intended destination, was reached by the divided convoy in January 1788. On closer inspection by the area proved unsuitable for permanent settlement. Phillip therefore set off to explore Port Jackson, where he found "one of the finest harbours in the world".On the evening of 26 January the British Flag was raised at Sydney Cove, and the King's health toasted. Australia Day is celebrated on the anniversary of this simple ceremony, marking the founding of the British settlement of New South Wales, and hence of the Australian nation.
Posted by Mansoor Bolar at 11:24 AM 0 comments

The Royal Barges of Thailand.

The Royal Thai Navy and the Department of Fine Arts commissioned the construction of the Narayana Song Suban Barge - the first to be built during the current reign - to pay homage to His Majesty the King on the 50th Anniversary of his Accession to the Throne.
Subanahongsa Royal Barge:

The name Subanahongsa, or golden hamsa, refers to the swan-like mythical steed of the Hindu God Brahma which appeared in Thai lore during the Ayutthaya Period.King Rama I ordered the Subanahongsa Barge to be built soon after his accession to the throne in 1782. The vessel was in constant use as the principal royal barge until it became too old to be repaired. 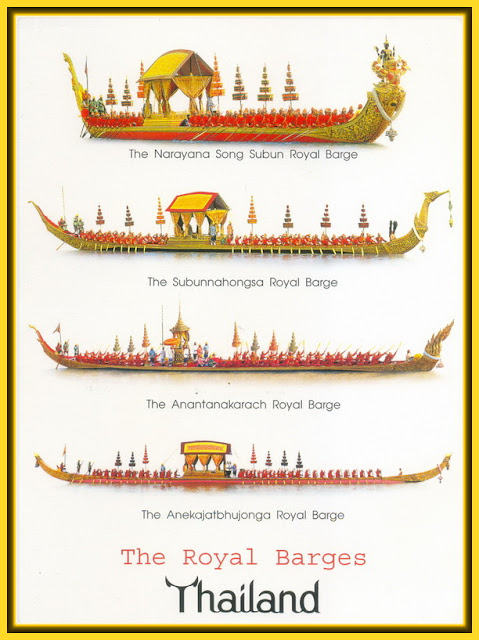 Anantanagaraj Royal Barge:
Second in rank to the Subanahongsa is the Anantanagaraj Barge, which is characterised by a seven-headed naga, the mythical serpent that is a symbol of water.Like the other principal barges, the Anantanagaraj had a predecessor, in this case built in the reign of King Rama IV. The present barge was built by King Rama VI and launched on April 15, 1914.
Anekajatbhujonga Royal Barge:

The oldest of the principle royal barges is the Anekajatbhujonga Barge, built for King Rama V.In state processions, the Anekajatbhujonga stands out as appearing quite plain in outline, as it does not have a figurehead, but a simple yet graceful prow.Closer inspection, however, dispels this impression of simplicity. The barge is in fact covered with an intricate pattern of innumerable naga figures.
For further reading: visit http://www.escati.com/news/royal_barges.htm
Posted by Mansoor Bolar at 11:50 AM 0 comments 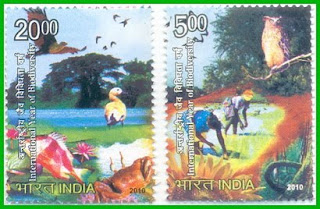 India Post issued a set of 2 commemorative stamps on Biodiversity on World Environment Day to enhance public awareness of the importance of conserving biodiversity. 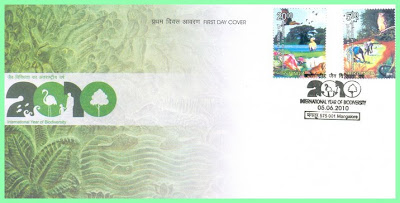 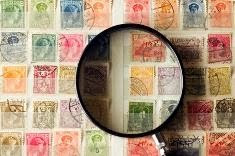 This blog has been featured in the 30 stamp collecting blogs from Around the World at changeofaddress.org.
Visit this blog and refer the 11th address at www.changeofaddress.org
Posted by Mansoor Bolar at 9:27 AM 1 comments 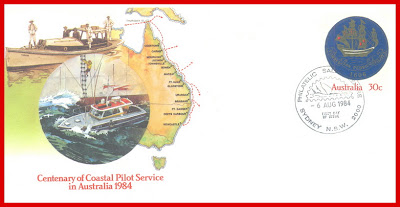 Originally, pilots were ferried to and from ships via a six-oared whale-boat. Then in 1908 the Service acquired its first motor launch. Torres, shown on the envelope with modern counterpart, Torpilot. A map illustrates graphically the extent of the Service. In the stamp area is the badge of the Queensland Coast and Torres Strait Pilot Service, displaying as its central element, Luis Baez de Torres ship San Pedrico, which is 1606 made the first recorded passage through the treacherous Torres Strait.
This cover was released on 6th August 1984.
Posted by Mansoor Bolar at 9:08 AM 0 comments

1. Sabine Pass Lighthouse features eight buttresses that stabilise the heavy brick structure and give it a distinct missile like shape. It was completed in 1856 and deactivated in 1952.
2. Biloxi Lighthouse is located in Mississippi, the white conical tower was built in 1848 and is still standing.
3. Sand Island Lighthouse first lit in 1873, in Alabama now stands alone surrounded by water.
4. Fort Jefferson Lighthouse was erected in 1876 and deactivated in 1921. Today it is the part of Dry Tortugas National Park.
5. Matagorda Island Lighthouse is located near Port O'Connar, Texas. It was automated in 1956, is made of cast iron and features a solar powered light.
Posted by Mansoor Bolar at 3:11 PM 0 comments