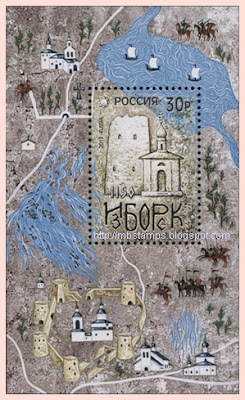 Russia Post released a Souvenir Sheet to commemorate 1150 years of Izborsk on 4th July 2012.The stamp depicts the Chapel of Our Lady of Korsun icons and Tower Talavskaya and the sheet has the pictures of the historical monuments like Izborsk Museum, Church of St Nicholas at Settlement, Truvor Cross, Trinity Chapel, Lake Gorodishche, etc.

A Special cover was released on the occasion of Olymphilex India 2012 which was inaugurated on 27th July 2012, at the GPO Philately Museum, Bangalore. 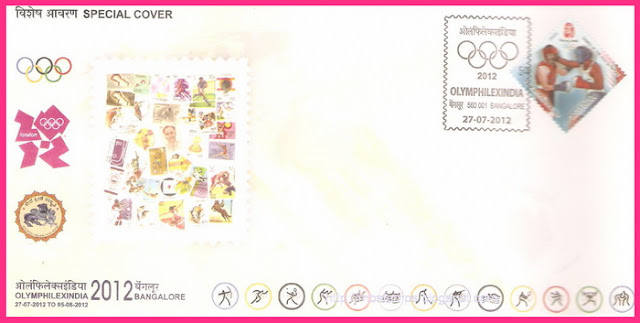 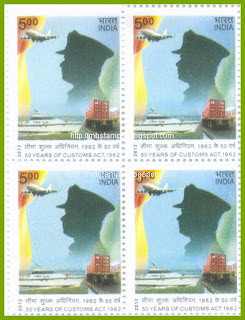 On the occasion of the Games of the XXXth Olympiad London 2012, we are pleased to inform “OLYMPHILEXINDIA 2012” Olympic and Sports Philately Exhibition will be held in Bangalore at the GPO Philately Museum from 27 July to 5 August, 2012. About 50 frames are expected to be displayed by five major budding Olympic Philatelists and a few sport philatelists,

Their  will be release of a special cover with a special cancellation approved by the CPMG Karnataka Circle on 27th July, the inaugural day of the Exhibition and summer Olympics, the inauguration ceremony is at Megahdoot Auditorium, Bangalore GPO, all are invited to the “OLYMPHILEXINDIA 2012” and make the event the grand success

The function will be at 10.00 hrs on the Inaugural day and regular days the exhibition will open from 10.00 hrs to 16.hours (excluding Sundays and POH) 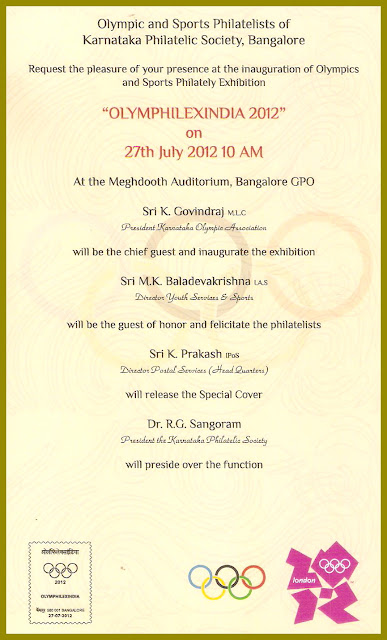 India Post released a set of 4 stamp and a miniature sheet on 25th July 2012 to commemorate 2012 Olympic Games to be held in London. 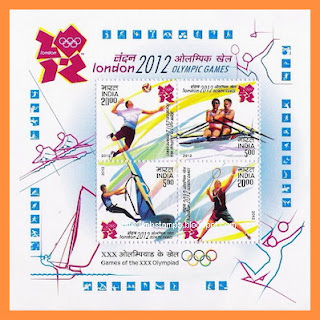 This is how a Post Box which was in a very bad state and being used as a trash box was transformed or replaced with a modern one after Complaints from Public. This Post Box is located at Marine Drive, Mumbai. 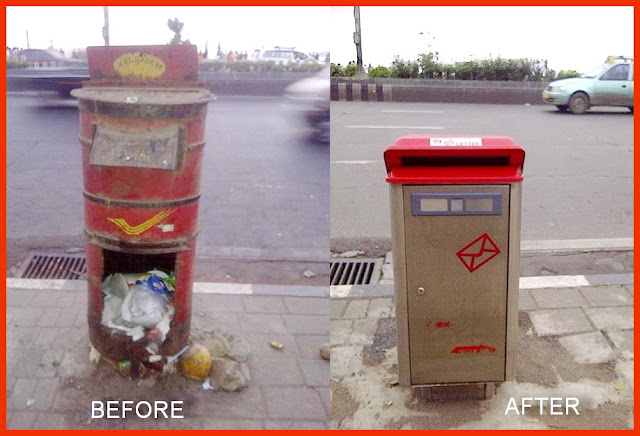 The New Post Box looks sleek and stylish, but I wonder if people will recognise this as a Post Box because of the Change in Color. I thank the Postal Authority of the region in Mumbai for responding to the Complaint and taking quick action to change the Post Box. 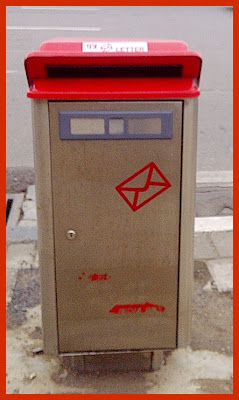 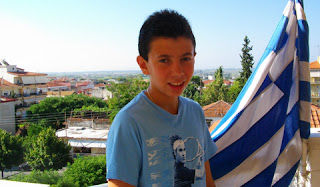 The 2012 edition asked young people to write a letter to an athlete or sports personality they admire to tell them what the Olympic Games mean to them.

In a brilliantly written letter, Chatzidimou places the world’s top-seeded tennis player in in ancient Olympia alongside athletes such as Diagoras of Rhodes and Polidamas and creates a dialogue with him. “Participation, entering the contest, is already a great victory, regardless of the trophy. A victory against fears, insecurity and difficulties, of yourself, against your own vanity and selfishness.” That’s how Chatzidimou has Federer describe the Olympic values to him. Chatzidimou criticizes the sometimes absence of fair play and the use of drugs in modern-day competitions, adding: “But for me the first Olympic Games mean neither anabolic [steroids] nor championship, nor financial benefits, economic crisis nor hate. They do mean joy for participating, fair play, friendship, peace and, I hope, this meaning will apply to this year’s Olympic Games.”

The jury complimented his simple and creative writing style. “The composition is original, very personal and stylistically creative. The modern and historic Olympic values come out very strongly,” it said.

Kenya takes home the silver medal, while Ukraine and Trinidad and Tobago tie for the bronze.

A book on stamps related to Folk Art of the World in Kannada language by Mr.M.R.Prabhakar published by Kannada Janapada Accademy, Bengaluru ( Bangalore) 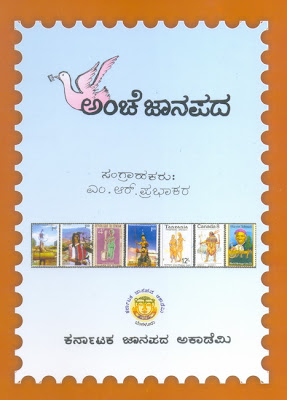 This is an excellent book on stamps related to various Folk Arts not just from India but all over the World. This Book is worth reading if you know Kannada. The pages are glossy Art Paper and the stamps are printed in color from all over the World. It is presented in short and simple sentence. 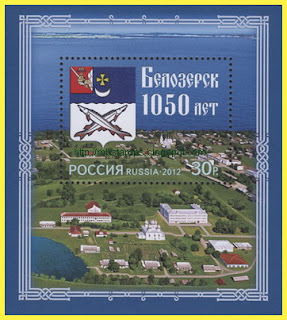 Russia Post released a Souvenir Sheet to celebrate 1050 years of Belozersk City on 4th July 2012. It depicts the ancient ramparts of the city and coat of arms of Belozersky Belozersk municipal area.

Knights of the Order of St.Andrew

Portrait of Alexei II (Ridiger AM) in the presence of Christ the Savior and the badge of the Order of St. Andrew Pervozvannogo.Patriarh Alexy II

Portrait of IK Arkhipova at the theater curtain background and the sign of the Order of St. Andrew.

Portrait of VI Shumakova against cardiogram and badge of the Order of St. Andrew Pervozvannogo. V.I.Shumakov.

Russian Post’s EUROPA stamp entry was named the winner of the 2012 PostEurop EUROPA Jury Prize Competition which was held at the famous Parc Floral de Paris in conjunction with the Planet Timbres Exhibition, where an expert jury met and voted through closed ballot. 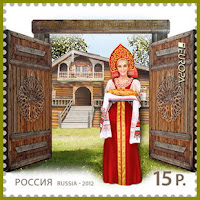 PostEurop held their second EUROPA Jury Competition at the beautiful Parc Floral de Paris this spring. Seven philately experts were invited to join the jury and judge the EUROPA stamps based on their expert opinion. 55 entries were displayed before the jury and after much deliberation, the jurors casted their closed ballots followed by a round of voting and discussion. Having reached a consensus, Mr David E Failor, Cheif of the United Nations Postal Administartion, proudly announced Russian Post as the winner of the 2012 Europa stamp Jury Prize. 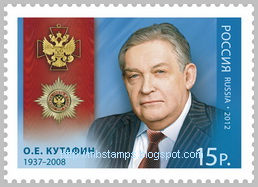 Russia Post issued a  stamp on O.E.Kutafin on 26th June, 2012.The stamp depicts a portrait of OE Kutafin and the Order "For Merit". 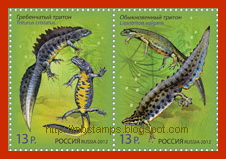 Russia Post issued a set of stamp on Newts as joint issue with Belarus on 25th June, 2012. The stamp depicts crested newt and common newt. 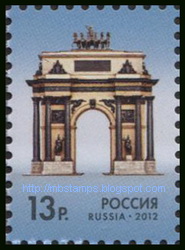 Russia Post issued a stamp on 14th June 2012 of Triumphal Arch in Moscow which is dedicated to the 200th anniversary of Russia's victory in the war of 1812.The current arch was built  in 1966-68 in the middle of Kutuzov Avenue, close to the Victory Park. An open space surrounding the arch is known as the Victory Square.


2011 edition 0f Year Book edited by Madan Middha has been released with many varying contents in 26 chapters.  It starts with the Preface by the Editor and articles by noted philatelists Mr Ashok Bayanwala, Naresh Agarwal, Rajesh Paharia and Jeevan Jyoti on different branches of Philately. It covers details of philatelic activities of the year 2011 like Postal history, new issues, Postal stationery,Club News, exhibitions and many other important aspects of Philately. The book is a must for true Philatelists and would be helpful companion for all stamp collectors too . The Editor has taken pains to bring all related topics under one roof and has given a form of this wonderful book with a reasonable Price. 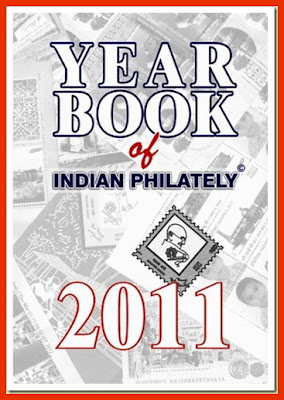 Excerpts of  PREFACE of the Book:

It is one of the greatest mysteries I have ever encountered in my life! After all Philately is what? Is it an accumulation of a government product called stamps? Or it is collection of the pre-payment tokens for a service, i.e. the delivery of letters? Is it concerning a commodity or a commercial activity? Is it a pastime or a profession? Is it a hobby for the youth or is it a serious recreational pastime for the matured? Is it History or is it a research subject? Is it the world itself or a window to the world of culture and humanity? Is it a specialised trade or a new investment avenue for the investors? After all what is it? How can Philately be explained and defined properly?

How should this great hobby be presented before others including the new-comers? Let us ponder over it once again.

Now what can we extract from all the above discussion? After all what is philately? Which word can explain all its traits?

After going through a number of dictionaries and thesauruses I fail to find a word which can define the Philately with all its qualities, except the word Philately itself !

So, what now? We surrender. Let the Philately be Philately. Nothing can explain it, but only our pure love & respect for this great hobby. Come; let us re-devote ourselves for it, for it has given us major portion of all our happiness & enjoyments. AMEN.

As usual, let us conclude with happy notes once again. Blessed by the good wishes of our learned readership the “Year Book of Indian Philately” has won a number of more awards. It started the year with a 'Bronze' at the 'INDIPEX 2011' at New Delhi in February 2011, followed by a 'Silver Bronze' at the 'NIPPON 2011' at Yokohama in Japan in August 2011 and a ‘Bronze’ at 'CHINA 2011' at Wuxi in China in November 2011. At home it has won a 'Silver' at the 'SINE 2011' at New Delhi in November 2011. We have surprisingly discovered that the Year Book has won a medal at every competitive exhibition, it has participated in!! We are reproducing here-in-after the score card of the Year Book of Indian Philately for an instant view. Is not this a delighting news? But this imposes a new set of duties too. We have to commit ourselves to higher standards to maintain this record, and…… WE DO.

You can expect a better outcome every next time. We are committed to this.

We trust to have the usual whole hearted support of our learned readership, all the ways; all the times.