Institute of the office of the High Commissioner for Human Rights

A special cover was released on 17th April 2017 at Chennai on the occasion of Dedication of INS Chennai to Chennai City.

A special cover was released on 27th April 2017 to celebrate 100th Birthday of Rev. Dr. Philipose Mar Chrysostom at Thiruvalla. 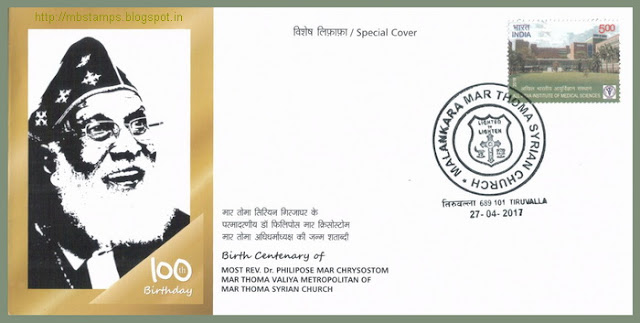 A special cover was released on 01.06.2017 in Davangere on the ocassion of World Milk Day. World Milk Day is a day identified by the Food and Agriculture Organization (FAO) of the United Nations to recognise the importance of milk as a global food. It has been observed on June 1 each year since 2001. The day is intended to provide an opportunity to bring attention to activities that are connected with the dairy sector. Milk is an important part of a healthy balanced diet. World Milk Day provides the perfect opportunity to spread the word and celebrate all aspects of milk and dairy products in many countries around the globe. 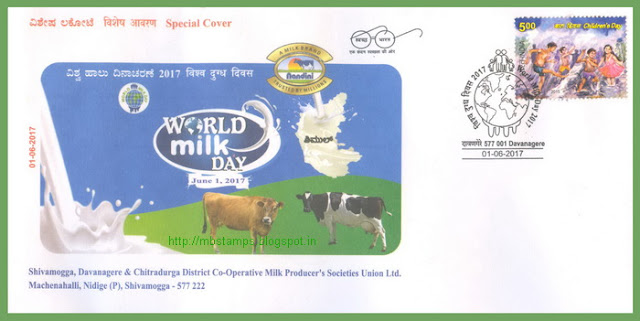 Shivamogga, Davanagere & Chitradurga District Co-Operative Milk Union Ltd. is one of the leading milk unions among the 14 district milk unions of Karnataka, is an ISO 22000-2005 Certified Organisation, registered on 25-11-1987. The union is committed to provide maximum possible price for the milk producers and is also committed to provide quality milk and milk products to consumers.

India Post released a set of 2 stamp and miniature sheet on the occasion of the 250th year of Survey of India, at a function held at New Delhi. 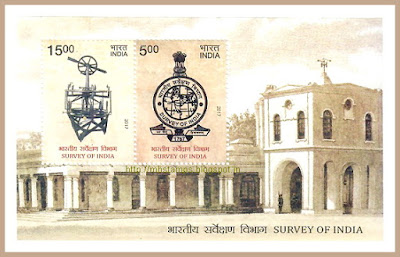 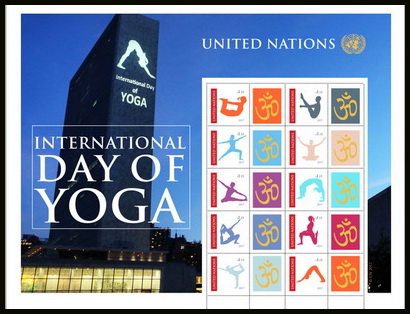 India Post released a Stamp in honour of Jhala Manna on 18th June 2017 at Badisadri in Chittorgarh, Rajasthan. 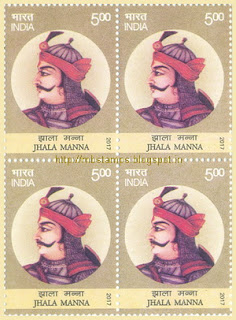 Heroes of the Russian Federation.

Russia Post released a stamp of  Andrei Gennadyevich Karlov on 10th February 2017 depicting his portrait and the Gold Star Medal.

A special cover was released on the Tamil Nadu Circle Postal Co-operative Bank Ltd. on 23rd March 2017 at Chennai.

A special cover was released on the ocassion of 1000th Birth celebration of Sri Ramanuja at Srirangam on 1st May 2017.

A special cover was released on 18th March 2017 to mark the Diamond Jubilee celebrations of  Mar Theophilus Training College at Thiruvananthapuram. 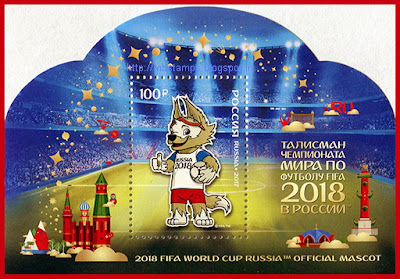 A special cover was released to celebrate 75 years of  KCP Limited at Chennai on 27th December 2016. 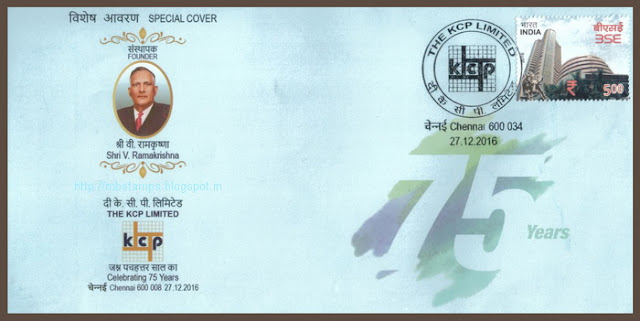 On 25th May 2017 Gibraltar Post releases seven different ships from the British Royal Navy have been named after Gibraltar “HMS Gibraltar”. The set of seven stamps depict: 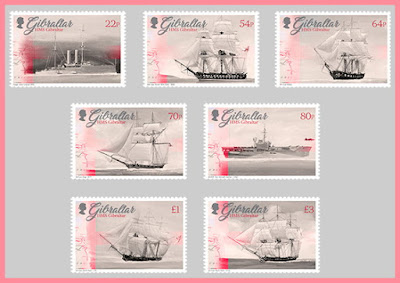 70p - HMS Gibraltar was an American 14-gun brig captured in 1779, then in turn captured by the Spanish in 1781and renamed Salvador, then recaptured by HMS Anson in 1800.

£1 - HMS Gibraltar was a 20-gun sixth-rate built in 1711, rebuilt 1727, and sold 1748. It was the first command of John Byng, who was after wards to be court-martialled and executed in the opening stages of the Seven Years’ War.

A special cover was released for the diamond Jubilee celebrations of TITUS II Teacher's College at Thiruvalla on 15th March 2017. 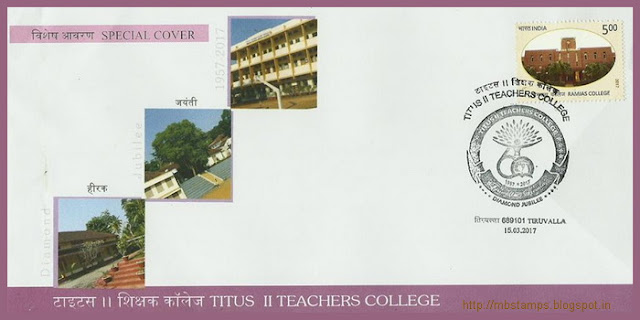 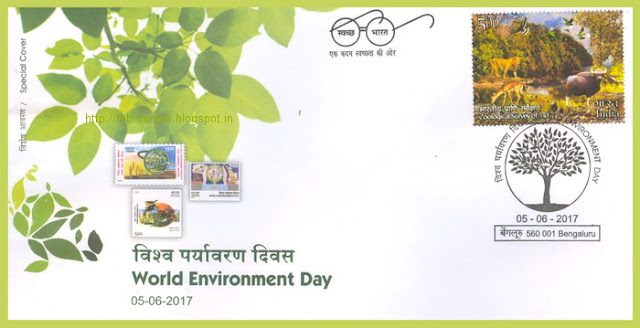 World Environment Day (WED) occurs on 5'" June every year for encouraging worldwide awareness and action for the protection of our environment. In 1974 the first WED was held with the theme "Only One Earth". This day celebrates the natural environment and allows a global platform to raise awareness on the environmental issues worldwide, with plans to mitigate these issues as a global community.

The celebration of this day provides us with an opportunity to broaden the basis for an enlightened opinion and responsible conduct by individuals, enterprises and communities in preserving and enhancing the environment. Since it began in 1974, it has grown to become a global platform for public outreach that is widely celebrated all over the world. From 1987, every World Environment Day has a different global host country, where the official celebrations take place. This year it is Canada. The theme for 2017 is 'Connecting People to nature - in the city and on the land, from the poles to the equator'. 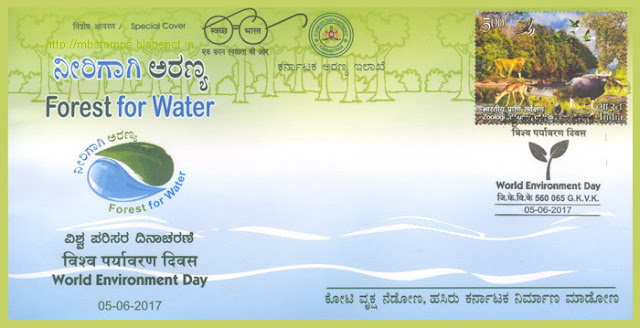 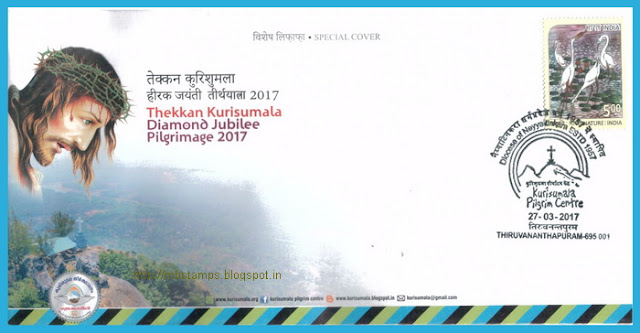 A special cover was released to celebrate the Kumbabishekam at Tiruvannamali on 6th February 2017. 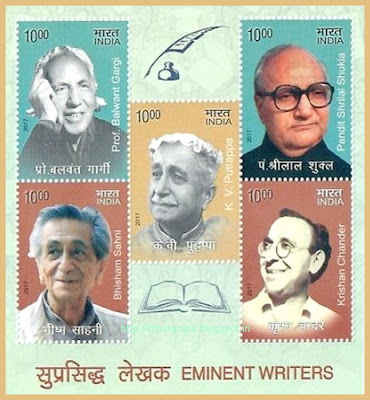 A special cover was released on the occasion of Sri Ramanuja Sahasrabdi on 18.01.2017 at Chennai.