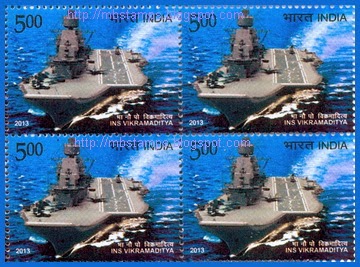 INS Vikramaditya (R33)  is a Project 11430 modified kiev-class aircraft carrier which entered into service with the Indian Navy in 2013. The ship has been renamed in honour of Vikramaditya, a legendary 1st century BC emperor of  India. Originally built as Baku and commissioned in 1987, the carrier served with the Soviet and  Russian Navies before being decommissioned in 1996 as she was too expensive to operate on a post-Cold War budget.

The carrier was purchased by India on 20 January 2004 after years of negotiations at a final price of $2.35 billion. The ship successfully completed her sea trials in July 2013 and aviation trials in September 2013.

She was formally commissioned on 16 November, 2013 at a ceremony held at Severodvinsk, Russia. The ceremony was attended by Indian Defense Minister A.K. Antony and the Russian Deputy Prime Minister Dmitry Rogozin. The ship is expected to begin patrolling the Indian ocean by early 2014.