A special cover was released on the Puneri Pagadi on 10th December 2015 at Pune. 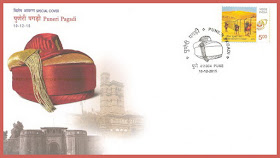 It is a traditional headgear worn by eminent personalities from the 19th century onward which depicts the symbol of pride and honour in the historical city of Pune.